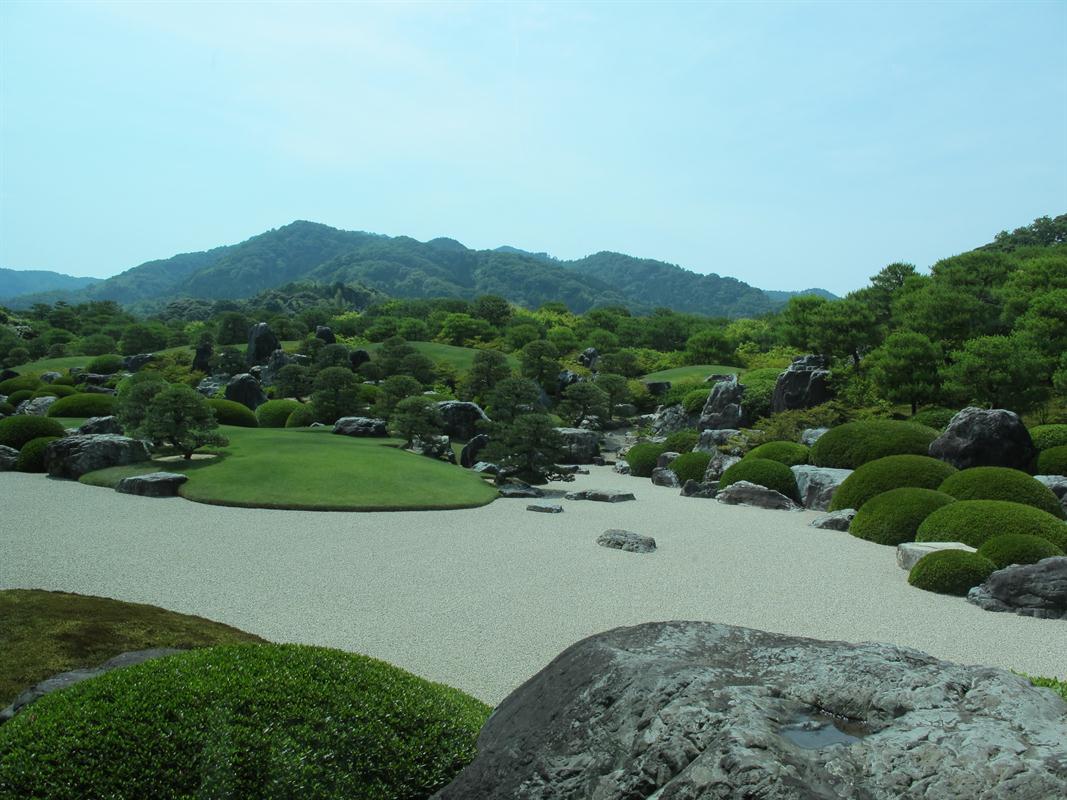 Posted at 00:00h in Blog, Japan by Don and Sharry 0 Comments
Yasugi-Matsue-Izumo

We left Hagi early Friday morning on a fast trip north, up the coast of the Sea of Japan to Yasugi to visit Adachi Museum and Gardens. Adachi came highly recommended by our Waikiki Yacht Club friend and Japan Sensei, Jack Peters. It was a four-hour train ride on the San‘in Line and involved a change of trains in Masuda. We planned to visit Adachi Friday afternoon, take the train to Matsue or Izumo to spend the night, and then visit one of Japan’s oldest Shinto Shrines, Izumo taisha. If all went according to plan, we would be back in Hagi by early Saturday evening.

The train ride was beautiful; we passed by seaside fishing villages and rural farms with beautiful green rice fields, their flooded surface reflecting the sky. Upon arrival at Yasugi, a little town out in the middle of “nowhere”, we were pleased to learn that there was a shuttle bus to take us the 20-minute ride to Adachi Museum and Gardens. We were looking forward to spending the beautiful summer afternoon walking in the gardens. Out of 827 gardens in Japan, the Adachi Garden was chosen as the “Best Garden in Japan” for seven consecutive years, and the pictures on the website looked amazing.

The museum was wonderful. The Summer Exhibition featured the same works that were displayed at the museum’s opening ceremony 40 years earlier (1970): “Japan’s Greatest Painters: Taikan Shibo, Kansetsu and Ryushi”. We arrived, bought our tickets and then discovered that we had to go through the museum to see the gardens. While the paintings were wonderful, the overall experience was disappointing. Visitors are not allowed to actually go into the gardens; the gardens can only be viewed through windows. The museum brochure explains in the words of the late founder of the museum, Adachi Zenko: “The garden is, so to speak, a picture scroll.” Adachi’s thoughts about Japanese painting and his passion for landscape gardening produced the Dry Landscape Garden, the White Gravel and Pine Garden, the Moss Garden, and the Pond Garden.” There are lots of photos of the gardens inside the museum, displaying the beauty of the landscape in each of the four seasons of the year; but a visitor is not allowed to enter the gardens. One can look, but not touch, feel, or smell. I felt totally deprived of the pleasure of the sensory experience of a garden. Two of the gardens are actually planned as pictures viewed from inside and framed by the window of the museum, and are named “The Living Picture” and the “Live Hanging Scroll”. The good news is that the windows were immaculately clean. I think that Mr. Adachi was a total control freak. I don’t have many photos of Adachi because taking photos inside the museum was not allowed. You can see the gardens almost as well as we did by going to the website below.

Being the “adventurers” that we are, we did not have a reservation for a place to spend the night. We needed help and thought that the shuttle drivers in the parking lot probably spoke some English, so we asked them to help us call a couple of Ryokan to see if they had space for the night. I had tried to do this before we left Hagi, but no one at the places I had chosen on the Internet seemed to have a person who spoke any English. I printed out contact information for several places in Matsue and in Izumo that sounded interesting and we tried to figure out where to go next. The shuttle drivers ruled out my choice in Izumo; there was no room at the inn I had chosen.

We decided to go to Matsue, a city with a population of 194,000 and consequently more choices; Matsue was also on the way to Izumo. We shuttled to the train station and traveled the short distance and upon arrival went to Visitor Information for help. The Visitor Information Lady called Naniwa Issui, one of my Internet choices, a 5 story Ryokan Hotel on the shores of Lake Shinjiko. We were told that they had room, but did not have any English speaking staff working that evening. We told the VI lady to book the room for us; we would be OK. I wish that I had a photo of our arrival by taxi at the hotel; there was a staff of 5 or 6 people, beginning outside at the turn-around at the entrance to the hotel and ending at the front desk, who bowed and welcomed us into the hotel. As it turns out the Hotel manager spoke enough English to get us registered and up to our room. We quickly changed into our yukata and went down to the onsen baths for a wash and a soak. Fully refreshed, clean and shiny we retired to our room and relaxed until our Japanese-only speaking “house girl” arrived to serve us a 14-course dinner in our room. Admiring the food and eating took up the remainder of the evening, dinner was cleared, the futons laid out and we fell asleep with visions of a rugged seacoast, fishing villages, rice fields, pristine gardens, and beautiful food dancing in our heads.

To view the Ryokan Hotel (the onsen baths were particularly beautiful):

Saturday morning we woke up early and went out for a walk along the edge of the huge lake and through the winding streets of the town near the hotel. We ate a Japanese breakfast of a half dozen delicious small dishes, including fish and rice. The Visitor Information Lady when we arrive in Matsue told us about a small private railroad, the Ichibata Electric Railway, affectionately called the “Bataban” by the Japanese who love their trains. The Bataban went direct to Izumo from a train station very close to our hotel. it was within walking distance, but the hotel insisted that we ride in their shuttle. Our arrival procedure occurred again in reverse, with a line of hotel staff bowlng and thanking us for staying at their hotel, all the way from the front desk to the hotel shuttle. It was a strange and wonderous experience; we felt like royalty.

The train ride to Izumo Taisha took about 20 minutes.

I took a photo of this display at the train station, only to learn later that a movie featuring the Bataban had just come out in Japan the previous month.

“Perhaps the oldest Shinto shrine of all, Izumo is second in importance only to Ise-jingu, the home of the sun goddess Amaterasu. The shrine is as old as Japanese history. . . and its origins stretch back into the age of the gods.” (quoted from The Lonely Planet, Japan) “In October of the lunar calendar, a festival is held to welcome all the gods to Izumo Grand Shrine. It is believed that the gods gather at Izumo Shrine in October to discuss the coming year’s marriages, deaths, and births. For this reason, people around the Izumo area call October kamiarizuki (“the month with gods”), but the rest of Japan calls October kannazuki’‘ (“the month without gods”)”. (quoted from Wikipedia).

For more about Izumo taisha go to the website below:

It was a short walk from the train station to the entrance of the Izumo where we entered through a huge Torii into a park-like setting.

A leisurely walk through this park, led us to a cluster of buildings and a large crowd of tourists. Izumo is an important tourist destination, but as in most of our travels on this remote coast of Japan, the tourists were ALL Japanese.

The main shrine, which we should have seen rising above the lower buildings and which contains the inner shrine, was hidden inside a makeshift tent/building; Izumo was undergoing major restoration. Oh well, we soaked up the atmosphere and watched people.

A photo of a poster of the Main Shrine

The highlight of our visit to Izumo was viewing a Shinto marriage in the Kaguraden Hall with family photos preceding the ceremony. Izumo is an auspicious location to have a wedding, as the shrine is the home of Okuninushi, who is worshiped as the god of marriage and a is believed to bring good fortune

For more photos of Izumo taisha than you ever wanted to see:

We headed back to Hagi and enjoyed the scenery of the coast of the Sea of Japan (in reverse). This fast trip felt much longer than two days, and we were happy to be back home on Starr by Saturday night.