Why we stayed in La Rochelle 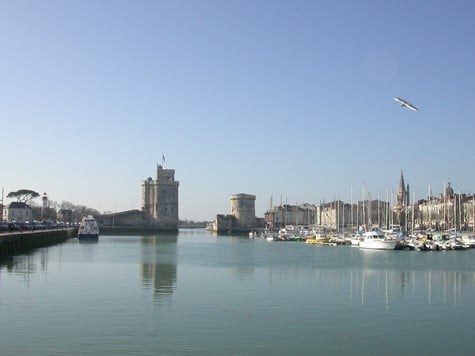 01 May Why we stayed in La Rochelle

When we left Ft. Lauderdale last in June to cross the Atlantic we planned to land in La Coruna on the Northwest corner of Spain. During the passage we changed our plans and decided, instead, to land at La Rochelle on the Bay of Biscay on the West Coast of France. We picked La Rochelle because whenever we mentioned that we were going to visit, friends and strangers alike would wax poetic about how La Rochelle is such a wonderful place.

When we first studied our European charts we didn’t think that STARR would be able to enter the Vieux Port (Old Port) or L’ Ancien Bassin des Chalutiers (Basin of Fishing Boats) at the center of the old town of La Rochelle. The charts showed 0 to 1+ meters of water in the channel that led past the large marina, Port Des Minimes (with 3300 slips), to the two old moorage basins located in the center of the historic town. As we learned more about European charts, we came to understand that 0 meters is the depth at the lowest tide of the year and the measuring of high tides starts at 0 and goes up from there; there are no minus tides on European charts. Whew, STARR could enter the old moorage basins during the period of 1-2 hours before or after high tide. We also learned that the old fishing basin has a gate, like a lock, which closes and maintains depths of more than the 6.2 feet of STARR’s draft; so, we decided to head for La Rochelle.

We were tired when we arrived at La Rochelle and tired of moving all of the time. It had taken us five weeks to cross the Atlantic, stopping in Bermuda and the Azores on the way. In our two years in the South Pacific we were constantly traveling across huge distances (a passage was frequently 800-1600nm). Our plan for this summer was to explore the West Coast of France, heading North up the coast of Brittany and Normandy and finally wintering at St. Katherine’s Dock in London. However, the cardinal rule of world cruising is “flexibility” and once again our plans changed. . .

We landed on Sunday, 6 July and our friends, who traveled with us from Florida, left on Monday. On Tuesday we went to Le Marche, the local farmer’s market, to check it out and to do some shopping. Le Marche is a ten minute walk from STARR’s “home” in L’ Ancien Bassin des Chalutiers. We were “blown away”. Le Marche is a “foodies” dream come true; we thought that we had died and gone to heaven right here in La Rochelle. Le Marche is a vision of abundance and artistic presentation. The Vendors are the farmers who actually grow or produce what they sell, and it is clear that they feel a great deal of pride in presenting their product. On our early visits, much of what we saw was new to us and we didn’t even know what it was, much less how to cook it. I think that that the first day we bought a little fruit and some vegetables, but were so overwhelmed by the unfamiliar choices that we simply couldn’t decide what to buy. You will be happy to hear that we quickly overcame this obstacle and now shop like a native French person. Our stomachs rule us, and Le Marche is the reason that we changed our plans to continue on to London to spend the winter and made La Rochelle our “home in France”.

The second reason that we decided to stay in La Rochelle is the first impression created by the Capitainerie of L’ Ancien Bassin Des Chalutiers, Christian Lemoine He speaks excellent English and made us feel at home and welcome. Because of the War in Iraq, we were a little nervous about how the French people would feel about Americans cruising in France. Christian immediately made us feel that La Rochelle was very happy to have us in their Port and that he, personally, would do all that he could to make our stay pleasant; so, on “Day Three” of our stay in La Rochelle we went to Christian and asked if there would be room in the Bassin starting in June and through the winter until April. Christian had to think about it; there is a huge demand for space in the summertime and fleets of racing sailboats were already scheduled to fill the Bassin at various time. After careful consideration and reviewing the schedule he told us: “Yes. I love your boat”, and Christian became our friend for life. Later we met his wife, Nicole, because I desperately needed a haircut after crossing the ocean and Nicole is a hairdresser in the lovely village of Ars en Re, on the Ile de Re. While I don’t speak French very well and Nicole doesn’t speak English very well, we have become friends. Together we speak “Franglish”.

We are so happy that we decided to use La Rochelle as our homeport for cruising the Bay of Biscay. We love La Rochelle, with evidence of its history dating back to the 13th century surrounding us everywhere we go (this was Eleanor of Aquitane’s “new port”). We love that it is a nautical center on the West Coast of France, that there are good & reliable boat workers here, and boat parts are readily available. We love the feeling of open space with walking/jogging paths on the edge of the Bay of Biscay; in fact, everywhere we go in La Rochelle there are fabulous vistas of the sea. The air smells of the sea, the sun is warm on our bodies, the tourists are French (with a few British tossed in for good measure) and the people who live and work in La Rochelle are friendly and welcoming. Our home in the Bassin has the feeling of open space. We have a clear view from STARR of the huge French flag flying from the top of the 13th century tower that guards the entry to the Vieux Port, , we sit next to the office of the Capitainerie, the Aquarium, and the Maritime Museum. STARR is two blocks from the Garre de La Rochelle (the train station) and it is only three hours to Paris on the TGV. There are inexpensive flights directly to London. Numerous other boats stay here in the winter, and we now have many English, American and French boat friends.

For Don and I the heart of La Rochelle is Le Marche. It is open from 0800-1300 daily all year round. While it is smaller on Sunday and Monday, everyday the beautiful old market building and the parking lot in front are bustling with activity. On Wednesdays it is half again as big and the market activity starts spilling out and spreading to the narrow streets adjacent to the market building. On our first visit the Saturday Market was a huge surpris; it is like a giant octopus, with the market building as its head, and its arms slithering down the side streets in all directions. Everything is there: la boucherie, la fromage, le quiche, le fruit, le legume, le poissson, etc. It is a visual feast.

Some vendors come to the market in trucks that open up on one side like a traveling store: becoming a butcher shop, or a cheese shop, or selling cognac & pineau, or quiche, or ostrich meat, or abats (internal organs), or rotisserie chickens. La Rochelle is at the epicenter of the seafood industry in France and the huitres (oysters), moules (mussels), Coquilles St. Jacques (sea scallops), bulots (shellfish with spiral shell), crevettes (shrimps), langoustine (like a minature lobster), anguille (eel) and the abundance of fish give “fresh” a totally new meaning.

Le Marche is a visual and gastronomic delight. I can now speak enough French to “get by”. I’ve learned that if I keep my mouth mostly shut and nod and point a lot, starting with the common French courtesies, like “Bonjour Madame/Monsieur” when I begin my shopping interaction with each vendor that (sometimes) they (maybe) mistake me for a French person After all I do have my little market cart and I carry my purse in my hand (as the French do) and I dress nicely and tie a scarf around my neck in “oh so chic” a style. Most often, however, I start the conversation in French and the vendor answers me in English. I do have my “friends” at the market now: the “chicken lady” and I greet each other and her eyes twinkle in recognition, even if I don’t buy poulet; the “olive lady” knows me and corrects my French as I mispronounce the various mixes of spiced olives as I tell her what I want to buy. Chritophe, the young man at Nicolas (the wine shop) is tres simpathique; I tell him what I am going to cook and he helps me choose the appropriate wine.

Our experience of shopping at Le Marche since last July, has taught us that there are “seasons” for food (and for many other things) in France. When we first arrived we could find the sweet and juicy little melons that we had eaten on our visits to Nice and every kind of tender young salad green imaginable. Summer is the season for all kinds of seafood, especially moules. There seemed to be were more kinds of volaille (chicken and other kinds of birds) in the market than meats. Wild birds, game and all kinds of wild mushrooms are in abundance in the Fall and we enjoyed magret de canard (duck breast) with cepes (porcini mushrooms) more than once on Chez Starr. Christmas is the season for homard (lobster) and in the winter endives appear in the market stalls in January (it is the season) and Coquilles St. Jacques, but no more moules (it is no longer the season). In April we will find agneau sur la mere (lamb that has never eaten grass, only mother’s milk) and agneau pre sale (lamb that has fed on salty, semi-tidal grass). To shop at Le Marche is to be reminded of the circular patterns of the year. We trudge off to the market , dragging our market cart behind, with eagerness and anticipation as to what new foods that we might find as the seasons changed. Sometimes we were pleased and sometimes we were disappointed that we could no longer buy something that had become a “favorite” Le Marche came to feel like a metphor for Life. One of the two absolutes in Life is Change, and it is now time for us to leave and to move on. We will miss La Rochelle and the many friends that we have made there. It has become our Home in France. We promise that we will return.