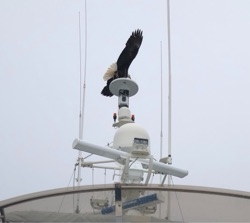 11 Jun Up the Aleutians

Posted at 16:01h in Alaska, Aleutians, Blog by Don and Sharry 0 Comments
We tried all day yesterday to get Kyle and Sharry out on a plane, but the fog was so bad that all five flights into and out of Dutch Harbor got cancelled.

We all spent the day in a holding pattern with multiple trips to the airport. Team Starr made the best of it though. Don cooked a great pot roast for dinner and we had movie night in Starr’s salon watching one of my favorites, “August Rush”.

The low pressure area that brought us the windy, cloudy, and foggy weather dissipated and moved away over night bringing a higher cloud ceiling and no fog this morning. The early flights got cancelled again, but Kyle and Sharry got a flight to Anchorage just after noon.

We were confident that they’d make it out today though, so Starr departed Dutch Harbor at 9AM. We had a bit of a scare just three miles outside the harbor when we saw what we thought was a boat on fire. We called them on the VHF, and it turned out to be a fishing boat that was lighting flares as “an exercise”.

A few minutes later we had an audition for an additional crew member in the form of an eagle landing on top of the Furuno satellite compass on top of Starr’s mast. We didn’t have a life jacket that would fit him though so his application was rejected.

Starr passed from the Bering Sea back into the Pacific though the Unalga Pass, the same one we used a few days earlier. It is interesting that once again the sky in the Bering Sea was 100% overcast, but it is sunny in the Pacific. We are now headed east past the last of the Aleutian Islands. We should arrive at the western end of the Alaskan peninsula at 8PM tonight.

We’d like to make a couple of stops on the way to Seward, 700 miles to the northeast. We’ve penciled in Canoe Bay and Geographic Bay, both on the peninsula, that others have raved about. However, the next low pressure area is approaching from the west and we may not be able to beat it into Seward if we don’t go straight there. The forecast is subject to change though. We shall see. In the meantime the weather should be great for the next few days.