The Passage from La Rochelle to Gibraltar 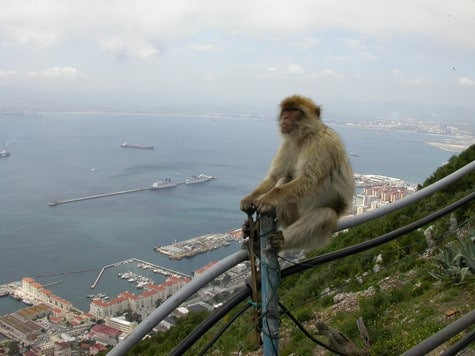 01 May The Passage from La Rochelle to Gibraltar

As I am writing this, I am sitting in the Pilothouse traveling NE from Gibraltar to Ibiza in the Islas Baleares. It is 0700, sunny, with light winds out of the NW and calm seas. Each day it becomes warmer as Spring becomes more pronounced and as we proceed further into the Mediterranean Sea. Today is the first day that I have had the time to sit down and write since returning to Starr in France on 6 April.

We left La Rochelle on 15 April with our stalwart crew of Jean-Claude Oudry from La Rochelle and Peter Trogdon from Annapolis (formerly from the Pacific Northwest). Don and Jean-Claude had been to meet with the French Meteo (weather station) the day before and the “experts” had told us that we should leave “immediately” as there was a front moving down from Iceland, but that was “impossible” as Peter was not arriving until the evening of 14 April.

Before Peter arrived we moved Starr from L’Ancien bassin des Chalutiers (old fishing basin) where we spent the winter, to Les Minimes, the 3300 berth marina closer to the sea, so we would not have to wait for the gates of the bassin to open at high tide (which would not have occurred until the afternoon on 15 April). As we left La Rochelle at 0830 in the morning, I almost cried; it is one of my favorite places in the world and I was already missing it.

We headed down the coast and hoped that we would be able to get south of Cape Finnesterre on the NW coast of Spain before the bad weather hit us; but as we approached La Coruna, about 60nm north of Finnesterre, we heard a gale warning on the VHF radio telling us that by afternoon there would be Force 7 or 8 winds. Don and I have a “deal” that if we have the option we head for shelter, so we turned left and hightailed it for La Coruna. Within two hours the wind was howling and while the snug marina of Darsena Desportiva was protected, nevertheless we experienced a swell from the sea. We felt very smug as we dragged out the buckets and scrub brushes and washed Starr with water and vinegar to remove the salt from the voyage. We then explored the charming Spanish town of La Coruna and ate Tapas for dinner.

The storm continued for five days, and we spent our time in La Coruna exploring the Tour de Hercules, the oldest working Roman lighthouse in the world (Julius Caesar lived in La Coruna for three years, beginning in 61 BC) and riding the electric trolley up and down the beautiful waterfront promenade. After three days of storm we rented a car and hired Gelsea Sturmer Thome, a very professional and knowledgeable guide. We spent the morning doing a walking tour of the “old city” of La Coruna. In the afternoon we drove the one-hour drive to Santiago de Compestella, perhaps the most important destination for pilgrims in Europe, dating back 1100 years.. Gelsea was a terrific guide and while Don had asked me “why do you want to go there?” once we mentally moved past the line up of tour buses and crowds of people, we were all incredibly impressed by the beauty and history of the place. It was still “off season”, but Santiago was full of Pilgrims, many of whom had walked there. Some of the people were like us just wanting to see the ancient shrine, but many of a more religious nature who, like Pilgrims of old, traveled to Santiago to ask Saint James (Diego), the third disciple of Christ, for help with some spiritual or physical “need” in their life, or to offer thanks for something good that had happened to them or to a loved one. We all left Santiago with a feeling of “awe”. There was the “tacky” side of Santiago, as well. I bought a souvenir: a “glitter globe” (like a snow globe that when you shake it, the glitter floats about Saint James with his pilgrim’s staff in the center).

At 1600, we left Gelsea in Santiago where she had an appointment to guide another group of people and drove another half hour south to Sanxenxo to see our friend Craig Rowe. We met Craig, his wife Cory and his two teen-age daughters Adrienne and Elena when they brought their sailboat La Perouse into La Rochelle for a few days in July. La Perouse was one of the few American boats that we met during the summer and everything “clicked” between us. We had only three days together, but have kept in touch and feel that we have the beginnings of a fine friendship. La Perouse wintered in Sanxenxo, and Craig and his partner in the boat were there to get it ready to head south into the Med; we were pretty sure that weather wasn’t going to permit us to stop in there in Starr to see them. When we arrived in Sanxenxo it was pouring rain, the wind was blowing hard and they were trying to load La Perouse into a travel lift to haul out to paint the bottom. We figured that they didn’t need a distraction, so we disappeared to go have a coffee (my fourth for the day). Once the boat was out of the water we said a quick “hello” and drove back to La Coruna, tired and happy to be back home on Starr.

We stayed so long in La Coruna that as we headed south, we debated among the crew whether we had time to stop in Lisboa. We decided that we could just squeeze in it. We left La Coruna on Thursday morning at 0940 and arrived at Caixcos Marina at 0100 on Saturday morning. We checked into the marina when it opened and at 0830 our guide, Bernardino Palma picked us up in this shiny, black Mercedes sedan and off we drove to “discover Lisbon”. We covered a lot of ground in one day: Prince Ferdinand’s fantasy castle at Sintra in the morning; and then, lunch and the exploration of Lisboa in the afternoon. Bernardino escorted us to Castle Sao George, the Afama, Baixa. Chiado, and Ciudad Alta districts of Lisboa and the Museo Maritime in Belem. By then we were “pooped” and returned to Starr by 1600. Back on Starr, Don had to dive to check the propeller: a strong vibration alerted us to the fact that we had a problem. By diving he learned that we had hit something during the night as we traveled between La Coruna and Lisboa and that the prop was bent. It was OK to still travel, but we will need to stop and haul out and repair it before too long.

We left Caixcos by 1830 and continued on our way to Gibraltar, arriving at 0800 on Monday morning and moored at Marina Bay after clearing customs (Gib’s status is a little nebulous, as its ownership is contested by both Great Britain and Spain, but it is not considered a country of the EU). We had arrived! The first leg of our 2004 season of cruising was accomplished. We had been traveling ten days since leaving La Rochelle, with five days spent in La Coruna, and we were happy to be at “The Rock”.

We spent four days in Gib and it was more than enough time. Gib is a great place to fuel but there isn’t really much to see or do. We explored the very “touristy” downtown in a couple of hours and did the taxi tour of “the Rock” in an afternoon. We bought a passerelle, since we had to “Med tie” at Marina Bay and expect that we will be doing a lot more of the same now that we are in the Mediterranean. We filled up with 10,600 liters of diesel. (We had purchased 2000 liters in La Coruna, just as a safeguard, but had not fueled since our arrival in Horta in the Azores when crossing the Atlantic in June 2003.) Other than that, we continued our International search for a fine meal and found one. We had a fine dinner prepared by a Danish Chef at The Little Mermaid, right on the edge of the quay at Marina Bay. Shopping at la mercado, however, made me cry again for La Rochelle; it was very sad in both the quantity and quality of the food.

The “idea” of voyaging to Gibraltar is important; it ranks among world cruisers in the same category as the Panama and Suez Canals, Cape Horn and the Cape of Good Hope. It is a significant accomplishment for a voyager. While it is “historic”, that’s about it!