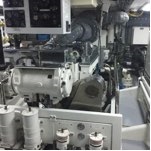 The seas continue to moderate as we get further north. The motion is now quite pleasant and less and less spray is pelting the pilot house windows as we punch through the chop. It is getting cooler too. Outside air temperature is down to 65 degrees.

After I got off watch this morning Don and I dug into the still not functioning computer system that monitors most of the systems aboard Starr including tank levels and alarms. It is a pretty important system for safety so we needed to get it working again. A dedicated computer runs a program that monitors the systems. For some reason the computer and the systems weren’t talking to each other. We rebooted all the components and checked all the connections, but nothing seemed to help. After 3 hours of messing with it we gave up and called the guy who installed the system in Seattle. It didn’t take him long to determine that our Ethernet router wasn’t doing its job in assigning IP addresses to the system components. It turns our out Ethernet router is also our little wireless router that sits on the shelf in the wheelhouse. We had unplugged the router a couple of days ago because we don’t have WiFi at sea. We plugged it back in as directed and everything is working fine now. Go figure. Nothing beats a self inflicted injury. The up side is that now we know that particular system pretty well.

Starr is complex but has a lot of redundancies for safety. We have two radars, at least two navigation systems, two depth sounders, 27 (Clay has been counting) gps capable instruments, two generators, more than two bilge pumps, etc. Probably our most important system, and the one without full redundancy, is our main propulsion system. Starr is a single screwed trawler and she is powered by a single 400 hp Cummins diesel. We get pretty good mileage for a 100 ton vessel, about 1 mile per gallon of diesel fuel. To provide a redundant source of power should our main engine fail, the boat has a “get home” system which hydraulically connects the two generators to the main prop shaft. We tested the system off of Waikiki before we departed on the trip, and Starr can move at about four knots using the “get home” system. Of course, we would be out of luck if the propeller shaft or propeller were unusable.

Our albatross is still with us, and we are seeing a bit more junk in the water. Clay saw some white plastic floating and I saw a black plastic fishing float on my morning watch. The glass ball watch is starting.