Stretching the Fuel Range to Cross the Pacific, Part 2 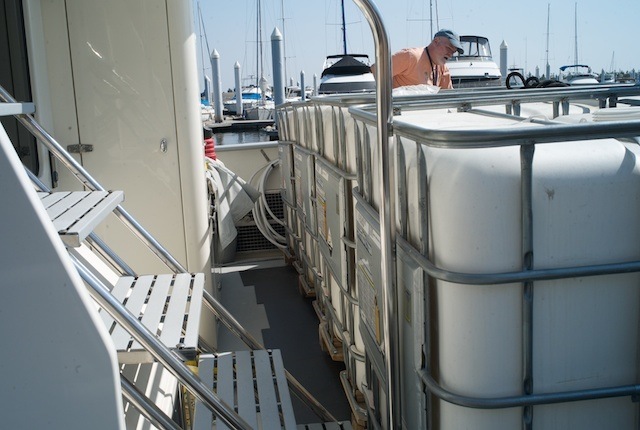 03 Apr Stretching the Fuel Range to Cross the Pacific, Part 2

Posted at 00:00h in About MV Starr, Blog, Japan by Don and Sharry 0 Comments
Stretching the Fuel Range to Cross the Pacific Part 2: Fitting the auxiliary fuel tanks.

Don has already written about the challenge of making our fuel last the 3800 nm voyage across the Pacific. He discussed fuel saving strategies and stretching our fuel capacity by using Intermediate Bulk Containers (IBCs) as auxiliary fuel tanks to add another 1000 gallons of fuel for our voyage.

We have now installed our IBCs to augment the fuel capacity of Starr and that gives us the range and reserve to make the non-stop voyage to Hawaii.

As a first step, we moved Starr to a dock that was close to where the IBCs were stored; this saved us from having to find a way to move these palette sized tanks all around the marina. It turned out they are surprisingly lightweight empty – the tank is made of an extruded plastic, surrounded by a metal cage that protects the tank itself. All this is mounted on a standard sized palette. Two of us easily carried a tank that weighed no more than 70 lbs empty.

After lining them up on the dock, we went on the task of removing remaining fluids and thoroughly cleaning the tanks on the inside. These IBCs were used to transport a relatively safe (i.e. non flammable or poisonous) industrial chemical used for cleaning and disinfection. We confirmed that both the tank material and its previous content is not harmful to our diesel fuel, but still decided to carefully scrub and clean any residue of this material.

When Don found the IBCs, he carefully measured the aft cockpit of Starr and decided that they will fit four abreast – he knew it would be a very tight fit, and when we lifted the first IBC to check its placement in the tightest spot, the moment of truth arrived – a sheepish Don looked on as the IBC dropped into its place as if it had been designed for Starr – a perfect fit (and no extra room!) The same held true for the additional three containers and we were relieved to see the plan coming together.

The next step was to design and build a build a bracing and tie down systems that would hold these tanks in place, fully fueled in even the worst seas. With each tank holding 1000 liters of fuel, the combined weight of tanks and fuel would be about 8000 pounds. The tanks cannot move in any sea, and even with the aft deck awash in several inches of water. Don brought large tie down straps that hold the tanks down and aft against a bracing system we built from lumber scavenged at the boat yard.

The bracing system consists of several pieces of 3 by 10” lumber that was left over from building the docks. We cut and beveled the ends of this lumber to form a bracing across the breadth of the transom. The palettes sit up against this bracing and are pulled by the tie down straps that we secure through the hawseholes with pipes.

This ties the IBCs together as one solid unit that it pulled down onto the deck and against the aft bracing at the transom.

The IBCs are filled through an opening on the top of the tank, and the fuel is withdrawn through a valve at the bottom. We have fitted the cam-lock fuel intake of Starr with a fuel hose that connects to the bottom valve, which allows us to transfer the fuel from the IBC to Starr’s internal fuel tanks, or even use the IBC as a fuel to draw directly from. While the latter is preferable, as it is the fastest way for us to lighten the load in the aft cockpit, we will carefully watch the fuel in the tank to ensure that it is clean and doesn’t have any unexpected reactions with the tank material or previous content.

Our goal is to use the fuel stored in the IBCs first and as quickly as possible – this will take us about a week.

What will we happen with the empty tanks? We sure look forward to reclaiming Starr’s aft cockpit as soon as we can, but that means we need to get rid of the tanks. Just dumping them overboard is not a choice, since the tanks are partially plastic, which is not only illegal to dump, but would also be against our view of treading lightly and being respectful to the environment.

Instead, we will cut up the empty tanks and separate plastics, metal and wood and stow the materials aboard until we can recycle and dispose of them properly after our arrival in Hawaii.