Starr’s Voyage to Hawai’i – Impressions of a Nordhavn Owner 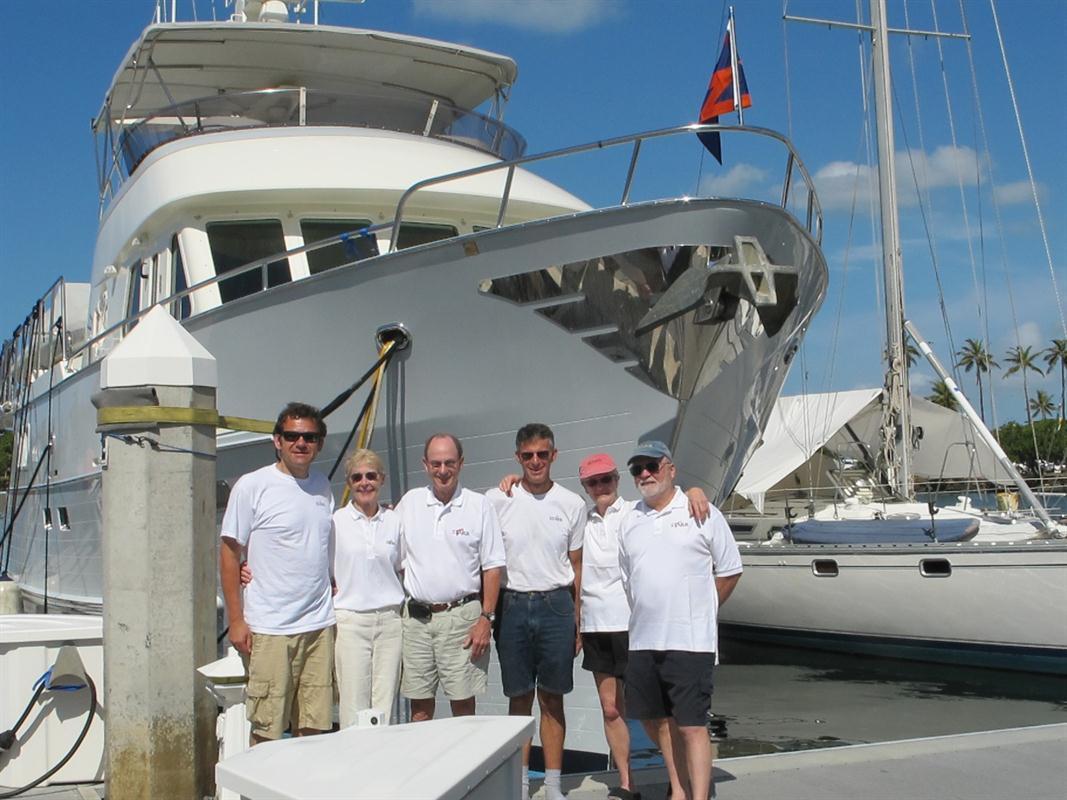 Posted at 00:00h in About MV Starr, Blog, Hawaii by Don and Sharry 1 Comment
MV STARR: A Northern Marine 75’ LLC

Starr’s Voyage to Hawai’i – Impressions of a Nordhavn Owner

Nordhavn’s are built to cross oceans. My own Nordhavn 50, Loreley has a range of almost 3000 nm that enables it to reach any place on earth. Its build withstands the weather and waves the oceans might throw at it, and the on-board systems are built to run continuously and trouble free. Yet, my boat could have never done the trip we just took aboard Starr – 24 days at sea, traveling over 4000 nm. It is of course interesting to compare and think about how a Nordhavn would have fared on this trip relative to Starr.

To say it right off – it’s impossible to compare two different boats unless they’ve been in exactly the same seas and weather. I kept thinking how my own boat would do in similar conditions and kept mental notes on wind, swells and waves, but a true comparison requires being in the same water at the same time.

During our voyage, we had dramatic variation on speed and fuel consumption – our speed varied from under 6 to over 9 knots, and fuel burn from 0.7 to 1.2 + MPG. While we varied speed sometime, most of these variations were caused by wind, waves, and currents – and significantly the latter, which seemed to have a mind of their own, and caused our speed to go up or down but as much as 2 knots in a few hours!

If you look at our fuel burn chart, you get an idea how much variation we had, and how we adjusted our speed to reduce fuel burn. This got better as our journey went on (and we suspect that lighter weight also helped,) and we arrived with nearly 1350 gallons in reserve.

Beyond fuel consumptions, there is plenty of discussion and debate on design of the “perfect” boat.

Starr is a proven cruiser – with more than 75k miles on her bottom, and nearly 10,000 hours on her engine, she has proven herself as a capable cruise boat. Interestingly she has some design features that are hot debate topics – notably her pronounced pilothouse forward design and a bulbous bow hull. Let me start though with the one vs two engine debate, and what constitutes a good back up in case of engine failure.

Starr has a single Cummins NTA855M engine mated to a Deep Case ZF gear with 4.5:1 reduction swinging a 5 bladed 50” prop. There is no second engine, and no second shaft or prop.

The shaft is fitted with a large gear sprocket that can be connected by a chain to a hydraulic motor that is driven by a hydraulic pump connected to either of the 20kw generators, giving emergency propulsion in case of engine or marine gear failure. This scheme obviously uses the same shaft and prop, so the backup would not be effective in case of fouled running gear or damaged or lost prop.

This approach contrasts with the one used on many Nordhavn that use small engines, (such as a Yanmar 40hp sailboat engine on my Loreley or Luggers on the larger boats), using a separate gear, shaft and prop. The advantages of this approach are immediate readiness (don’t need to put on the chain,) and independent running gear.

On our trip, the cummins didn’t miss a beat during its 530 running hours, and we never needed to think about backup power. In fact, in all the years of cruising, Don only used this backup power once, when a faulty solenoid shut down the fuel supply to the cummins – a problem he debugged and fixed in a few hours.

I prefer Starr’s get home arrangement over the separate get home engine on Loreley, for simplicity and appropriateness of use – that is, its complexity, cost and time to engage relative to likelihood of needing to engage it. I believe the separate get home engine, while easy and fast to engage and redundant, adds a disproportionate amount of complexity, cost and maintenance to the boat, as would a completely redundant main engine. Starr’s get home arrangement, by contrast, is simple. And of course, we had plenty of bed sheets in case we needed to rig an emergency sail. 🙂

The pilothouse on Starr has a pronounced forward location. The forward windows are located barely 15 feet back from the bow. This gives the boat huge space aft, both in the salon as well as boat deck. Critics of this design argue that an aft placed pilothouse provides a far more comfortable ride with less pounding and pitching experienced by the watch crew.

I have no experience with pilothouse aft designs (Loreley also has her PH forward,) so I cannot offer a comparison between the ride quality of the two different designs.

I can, however, say that during our entire trip, the ride in the PH was comfortable and watchstanding was easy. Pitch was soft with little pounding. There were only a few hours when things had to be secured from falling or tipping over (like our water drinking bottles.) As I write these lines, we’re headed into 5′ swells with 4-5 ft waves and 14 kts of wind, all about 20 degrees to the port of the bow. We keep the port PH door closed to avoid spray, but have the starboard door wide open for air and sunshine. Were pitching, but not in a jarring way, and my water bottle stays put on the dashboard.

The bulbous bow is also an area of extensive debate. Critics cite poor sea kindliness against weather, and argue that the efficiency benefits don’t exist or are even less efficient than a fine bow design. My opinion is biased, as my boat Loreley is also equipped with a bulbous bow and has offered a ride similar to our experience on Starr. In short, we’ve not experienced poor ride, spray or rough pitching or noise caused by the bulb. Not having a way to compare it to a boat without a bulb in this water makes it impossible to compare, but the subjectively experienced ride is comfortable, and no crew member, even when asked, felt that the boat rode poorly or uncomfortably.

As to the efficiency – again, comparisons evade us – over the 4000 miles of our trip, we managed a 1 MPG at an average speed of 7-8 kts, with currents, wind and waves against us 100% of the time.

These impressions are subjective and I doubt they will settle any debates. Ultimately the test of a good cruising boat is the question of whether the crew would be willing to do the same trip again? My answer is yes – our three weeks aboard have been comfortable and safe and I would not change a thing.

One last thought – in all the discussion over what makes the perfect cruising boat, among the most important elements is the crew itself – a good crew can overcome mechanical problems (to a degree of course..) while a poor crew can make the best boat a miserable experience. We had a great boat and an excellent crew – a perfect combination. I’m convinced that any Nordhavn, well maintained, with a carefully matched crew, can offer the same quality passage as we had on Starr.