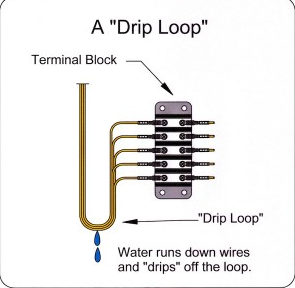 Posted at 00:00h in About MV Starr, Blog by Don and Sharry 0 Comments
Deck Drains-part 2

How to sink your boat…..OR BURN DOWN your boat.

When I wrote my recent blog entry about my deck drain problems, I had completely blanked-out recalling the discovery of a burnt-out electrical switch that could have caused a fire as the result of a leaking top deck drain.

Steve D’Antonio was on Starr last Thursday and Friday (October 10 & 11) doing a complete boat survey for me. We have been cruising Starr for fourteen years, and I wanted a professional analysis of the boat; it’s just too easy to miss things that are right in front of my face, and this refit time is when I have the opportunity to make things right. Steve spent two days on Starr taking over 500 photos and making copious notes (see www stevedmarineconsulting.com).

During his survey Steve D. commented on how I need more drip loops in several areas on Starr. My first thought was, “hmm, I’ve read Steve’s article about the necessity of having these drip loops, but isn’t that getting just a little picky”? The fact is that I didn’t completely understand the preventive function of drip loops.

One of Steve’s many comments was that 50% of boat fires are due to the shore power connections, and noted that Starr didn’t have the ABYC recommended shore power breakers within the required 10ft of the boat side connection. Suddenly that brought back the memory of finding a fried electrical switch from water intrusion, via a leaking top deck drain which ran thru the soffit and down into an interior wall switch in Starr’s salon.

Just prior to our departing Japan in 2011, there was a burning smell around a switch. I opened the switch and found a completely melted switch where even the wires were burnt in half. The short was caused by water intrusion from a leaking top deck drain.

I asked Steve D. “why didn’t the breaker shut off and protect the circuit?” Steve reminded me that electrical fires could start even without the breaker ever tripping. Even if it’s only a 15 amp breaker, if there is a short similar to having a small electric heater running, the wire will eventually heat up to the point of a complete meltdown and start any nearby combustibles on fire.

Steve D working on his findings

I highly recommend that anyone who is interested in learning more about drip loops read Steve D’s article in Passagemaker Magazine.