Starr in the Sea of Japn – Hagi 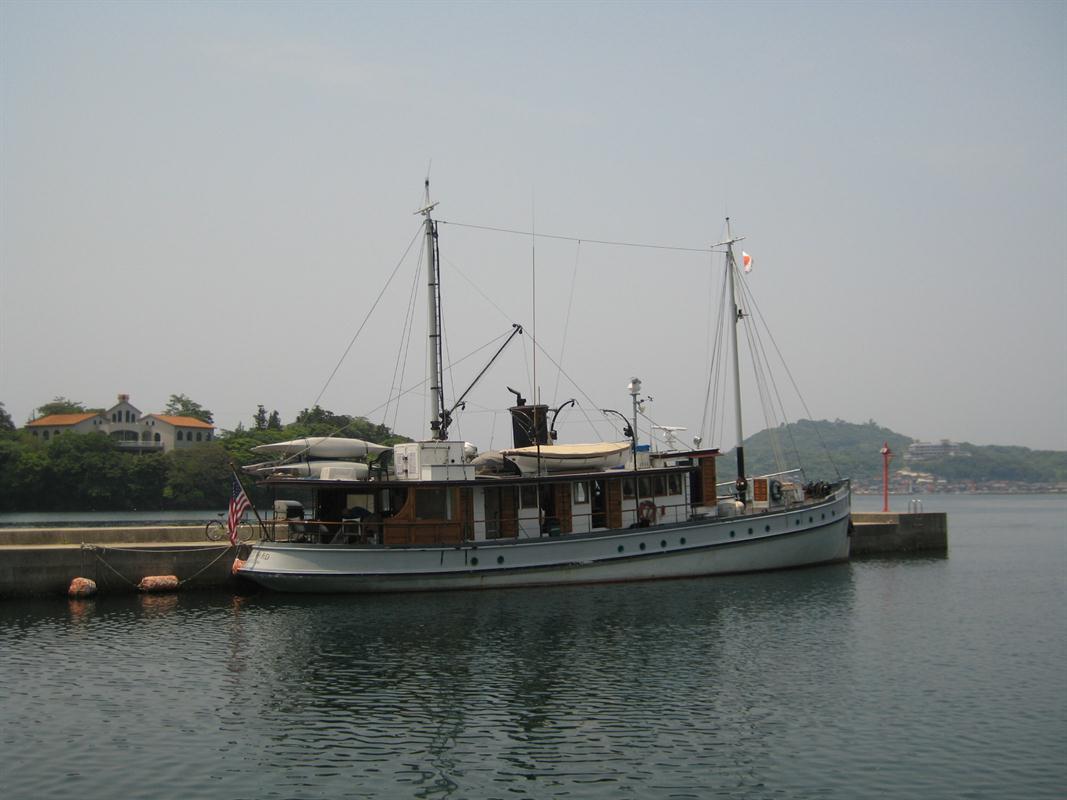 Starr in the Sea of Japan

I am home now in Seattle when I write this story and it is very difficult to “enter into” the story of Starr in the Sea of Japan. It feels like Japan is so far away: not only in miles, but a huge distance away in culture.

The best part of our spring cruising in Japan was the North Coast of Honshu in the Sea of Japan. From Yobuko we headed to Hagi, which was at the top of my list as a cruising destination in Japan. The Lonely Planet Japan travel guide describes Hagi: “Hagi is an attractive city with a well-preserved old samurai quarter. The ceramics made here are among the finest in Japan. During the feudal period, Hagi was the castle town of the Choshu domain, which, together with Satsuma (corresponding to modern Kagoshima in southern Kyushu), was instrumental in defeating the Tokugawa government and ushering in a new age after the Meji Restoration.” Hagi embodied everything that I am interested in: the romance of the feudal world of the samurai, the beauty of Hagiyaki (pottery), the beauty and wildness of the North coast, and some of the most gracious, friendly and generous people in the world.

We left Yobuko on Monday, August 7, at 0430 and settled into the Hagi Marina by 1640, where our friend Hugh Reilly on Westward stayed two years earlier and recommended as their favorite stop in Japan.

Our first morning in Hagi we head into town; the train station (more like a bus stop on the tracks) is a block away from the marina and only one stop from town. As we always do in a new town we stop at Visitor Information to get maps and information. The lady speaks broken English, but we manage to communicate to her that we would like to visit Sakagamma, which our Japan sensei Jack Peters recommended. Sakagamma is the oldest kiln in Hagi and represents 400 years of unbroken history.

The Visitor Information lady arranges a visit for us for the next day but warns us that the people at the kiln do not speak much English. We ask her if she can find us an English-speaking guide and she calls the Hagi Museum to ask if one might be available.

After lunch at a local udon restaurant we walk to the neighborhood of the old castle and the samurai houses that are close by. We wander around the streets and after a while we go to the Hagi museum, which has exhibits about the history of Hagi as a castle town and the role it played in the Meji Restoration. I have read a lot about this period of history and our interest has been further piqued by the historical photos of Ryoma Sakamoto, a hero of the Meji Restoration (it should be called Revolution) which were plastered all over Nagasaiki and advertisements for the annual NHK TV program Ryomaden, which appeared everywhere we traveled after Nagasaki. Ryomaden, the historic drama is the absolute rage of Japan. It’s like a cultural awakening for the young people of Japan, but appeals to all ages.

At the Hagi Museum there only a few explanations in English, but what exists is very helpful: A four page pamphlet is titled ‘The Geneology of the Energy of Overthrowing the Tokugawa Shogunate” and goes on to say, “The closing days of the Edo period were charged with acts of violence and plots. In the midst of the turbulent days, some young persons in the Choshu domain believed in overthrowing the Tokugawa shogunate envisaging a new Japan under the Emperor and fought it out. This exhitition is about the genealogy of this dramatic affair”.

After we are done wandering through, Don sits down in the lobby next to a retired Japanese gentleman in a baseball hat and starts a conversation. In turns out that the baseball hat says “Seattle” and Kenji Miyoshi, who speaks very good English, has done business in Seattle. He is a museum docent and invites us to a meeting about to take place of the English-speaking committee.

Kenji Miyoshi at the Hagi Museum

A few minutes later we join about 10 people who have been responsible for a newly published English language pamphlet about the museum and for the English explanations of the displays that we appreciated so much. They want us to critique their newly published museum pamphlet, but before long we are comparing the US and Japan regarding culture, politics, economy, the aging population of Japan and the depopulation of the more remote towns, like Hagi. Before we know it Mijoshi san and a woman docent, Aiko Kubota, offer to take us to Saka gamma the next day and Miyoshi san invites to take us to a local sushi restaurant for dinner that evening. Aiko san drives us to the restaurant in her car, and Miyoshi san arrives by bicycle. After dinner we taxi back to Starr and are once more amazed by the way we meet new friends in Japan, who go out of their way to take care of us. The truly amazing part is that this is the rule and not the exception, especially in the smaller towns.

Miyoshi san and his wife pick us up the next morning and he take us to a private musum of Hagiyaki, built by Hatao Yoshika (the son) to honor his father, Taibi Yoshika. After the museum we go to the Sea Food Market on the waterfront where the local fishermen bring in their fish to sell, and then to a small mom and pop sushi restaurant nearby. The sushi is delicious, and “mom” Mikie becomes our next new friend.

Mikie san speaks some English and we managed to communicate in Japanese and English (both spoken and written); she tells us that Hotaru (fireflies) have been out for a week, from 8-10pm each night, near the restaurant and will only live for another week. She offers to pick us up at 8pm that night to see the Hotaru. This is one of the highlights of my travels in Japan; I had never seen fireflie. She drove us on lanes behind the restaurant that ran through rice paddies and that were barely as wide as her tiny delivery van. Fireflies were everywhere and it was magical.

After lunch Aiko san picked us up in her car and we went to Sakagamma. We were ushered into a traditional house on a garden and served green tea in tea bowls made by the past master.

We were very grateful that Aiko san and Miyoshi san were with us, as our hostess, Junko Saka, spoke very little English. We then were taken to a room with many beautiful pieces of Hagiyaki made by Junko san and by the past master. After a tour of the ancient kiln which is only fired up twice a year, we bowed our goodbyes. The pottery was extremely beautiful. We learned that Saka Kouraizaemon Xii, the previous master died in an accident; he was only 54 years old. His sister in law, Junko san is carrying on the tradition of the 400 year old kiln. The kiln is only fired twice a year and when we visited, Junko san was preparing to fire half a year’s work.

For more information about Saka gamma go to the following website

After leaving Saka gamma we stopped at Tokoji Temple, one of the family temples of the Mori feudal clan, founded in 1691. The Mori clan moved to their castle in Hagi in 1608 and it was the political center of the Mori clan for more than 250 years. Five of the Mori lords are buried here at Tokoji (all odd-numbered generations except the first one) and half are buried at Daisho-in (the first two lords along with all even numbered generations after that). At Tokoji nearly 500 stone lanterns dedicated by Mori vassals flank the stone walkway behind the temple leading up the hill to the tombs. These lanterns are lit with candles during the Obon Festival, celebrated around August 15, to honor the dead. It must be a marvelous sight.

For more pictures of Tokoji, including the lanterns during Bon Odori go to:

That evening, back on Starr at the marina, we hear a “knock, knock” on the hull. Who is there, but Mikie san, with a gift of a large plate of sushi for our dinner. A wonderful way to finish a wonderful day.

Starr was in Hagi for a week, but on Friday and Saturday Don and I made a side trip on the JR San’in Line train, north along the Sea of Japan coast to Yasugi, Matsue and Izumo. I will talk about this in my next blog entry.