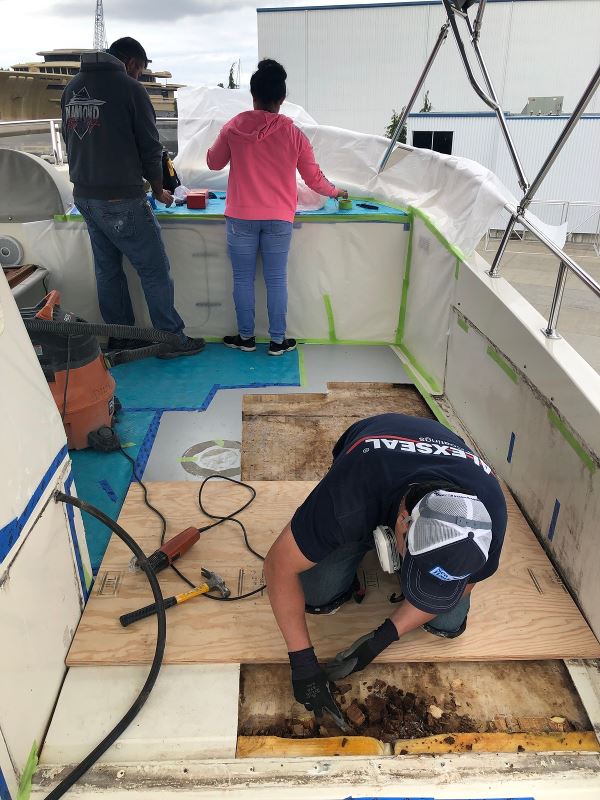 Posted at 15:09h in Blog, Hawaii, Seattle by Don and Sharry 0 Comments

We departed Seattle yesterday afternoon (August 20) and now are ready to head out past Tatoosh Island at the west end of the Straits of Juan de Fuca. Hawaii is our next stop.

Starr on hard and deck rot:

Starr has been on the hard for the last two months at Delta Marine having 60sf of Fly Bridge deck balsa core replaced by Diamond Painting plus some paint touch up.  The builder failed to properly bed twenty screws under the fly bridge seating benches when the boat was built 22 years ago resulting in water in the core.

We replaced the 15ft Novurania dinghy with a 15ft aluminum Polaris and a Etec jet outboard.  The new skiff can run in 6” of water.  This should be useful in places like the rivers in Hanalei, on the north of Kauai, and in gunk-holing around shallow coral reefs like those in parts of Kaneohe on Oahu.  We’ve made some interesting additions to the Polaris which I’ll talk about another time.

Aaron McCrum, Master Fabricator at S3 Maritime with our creation

We modified John Griffith’s flopstoppers.  The final welding is done and I can’t wait to see how they work!

Our passage making friends/crew flew in from Hawaii last Monday and they are all experienced hands.

Donna Lee Has made a number of Pacific crossings. Donna recently sailed with Richard Bernard on the 42ft Valliant SURFRIDE for a cruise from Hawaii to Tahiti.  Donna made the 2016 Hawaii to Seattle passage on Starr along with our CCA pal Joe Golberg.  Donna is an accomplished ukulele player and we look forward to being entertained for the next couple of weeks.  Donna has been working on provisioning this past week.

Clay Hutchinson was aboard Starr for last summer’s passage from Hawaii to Dutch Harbor in the Bearing Sea and then onto Seward Alaska.  Right after that passage Clay flew to Raivavae in French Polynesia to join our Kaneohe sailor friends Dave and Nancy Nottage on S/V Kaimiloa for the run from there to Mangareva, the Marquesas, and back to Hawaii.  Clay’s previous sailing experiences include three South Pacific cruises on his own boats.

Bill Leary, known as “Noodle” was also with us aboard Starr for our 2018 Alaska run and his wife Lori Loyd joined us in Seward to cruise Prince William Sound and then on to Sitka.  Noodle is an ardent sailor and wrote “Noodles Notes on Fifty Years of Sailing in the Hawaiian islands”, the most useful Hawaiian Islands cruising guide that I know of.  This will be Noodle’s “umteenth” Pacific crossing.  Some of Noodle’s notable passages include six voyages to the South Pacific and back including three on his own boats and seven Transpac races. Noodle was the navigator in four of those Transpacs, including the ’87 race aboard “Merlin” when they were first to finish.