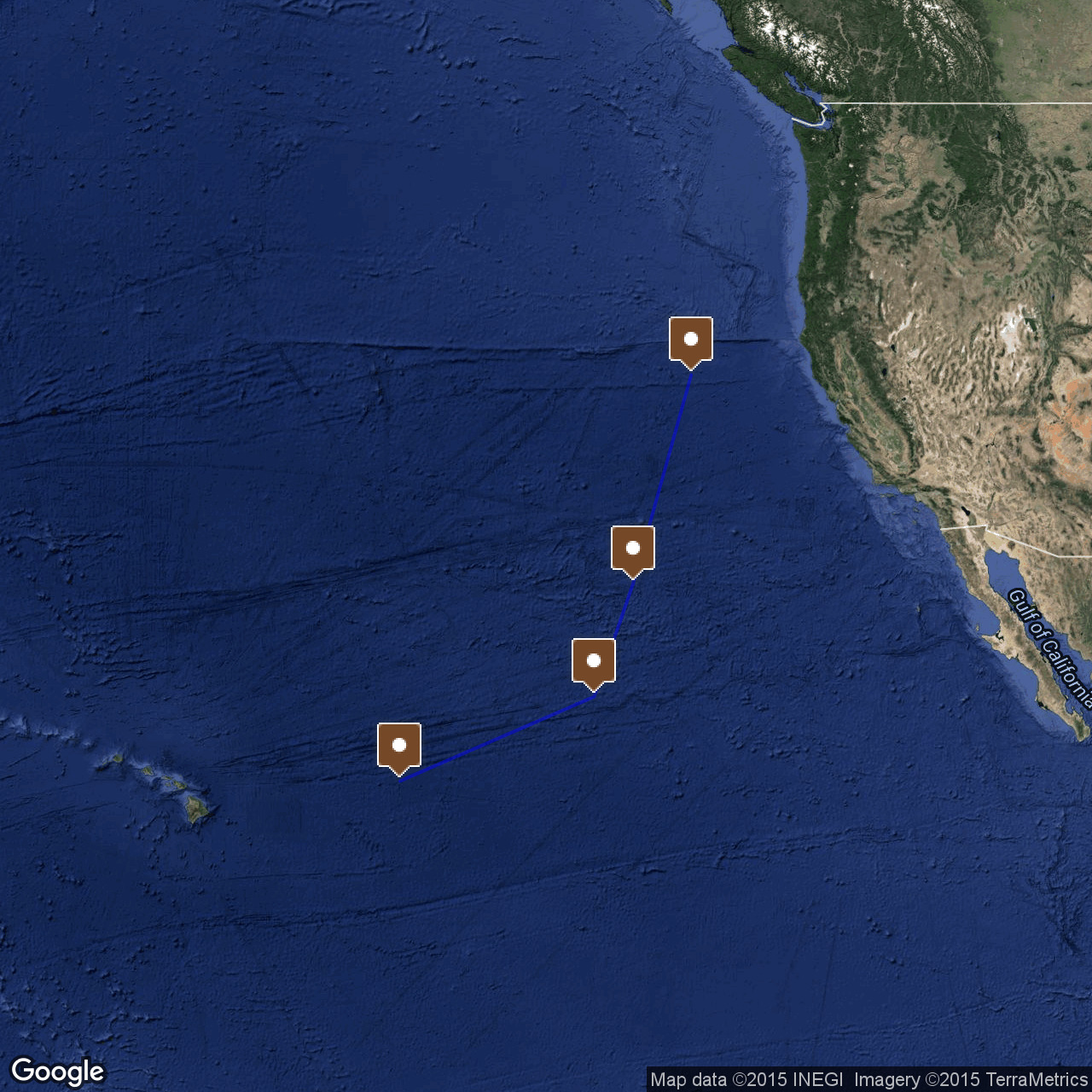 Posted at 12:33h in Blog, Hawaii, Seattle by Don and Sharry 7 Comments
We have been running the rumb line from Cape Flattery to Hawaii with the engine at 1500rpm making 8-9kts at 1g/nm. We had a North wind on our stern at 20-34kts, which on Starr wa a very comfortable ride. The sea water temp has gone up from 62f to 67.5f.

670nm out of Seattle

Our weather guru has advised us to alter course East of the rum line, so last night we altered course, reduced engine rpm to 1250rpm and slowed down to 7-8kts. This cuts our fuel usage down to 5gal/nm and extends our range to 4000+nm using our remaining 3100usg. If we stay on the waypoints listed below we should have fuel reserves to accommodate an additional 12-1600nm beyond the 2380nm projected from our position today to Honolulu.

Here is what our trusty weather guru says:

“The mid and SW Pacific (N hemisphere) is a minefield at present per courtesy of El Nino. Your journey down the pacific looks good – it’s when to turn right and make the westing that is the biggest challenge. The latest run of the EC model (best model for +5 to 10 days) has sharpened up a tropical low coming N-NNE from lower latitudes. It crosses Hawaii on 6th (Z/UTC time) then to 26/151 on 8th and then speeds up to be 34/145 on 9th. That has cyclonic winds and you need to miss it and give it a good clearance. This is a fair way out and timing and track may change. The track is likely to hold – heading NNE as it is pulled into the main system well to the north – so the main avoidance is to hold east (as per yesterday’s WP) and if necessary slow a bit to give it more clearance.”

So, with this advice, our new course is as follows.

Revised Route
After already having run 670nm, we still have around 3100gallons of fuel on board. With that we can still run another 4000nm or more depending on how much we slow down.

Our ETA are as follows:

All is well on board. Doug MacQuarrie made a delicious frittata for lunch yesterday. Doug Cole is working on improving the ham radio reception.

Sharry is very happy that the winds have been 1-2knts on our stern for the past 18 hrs w/ a full moon at night and sunny blue skies during the day.