Some Thoughts about our Passage (so far) 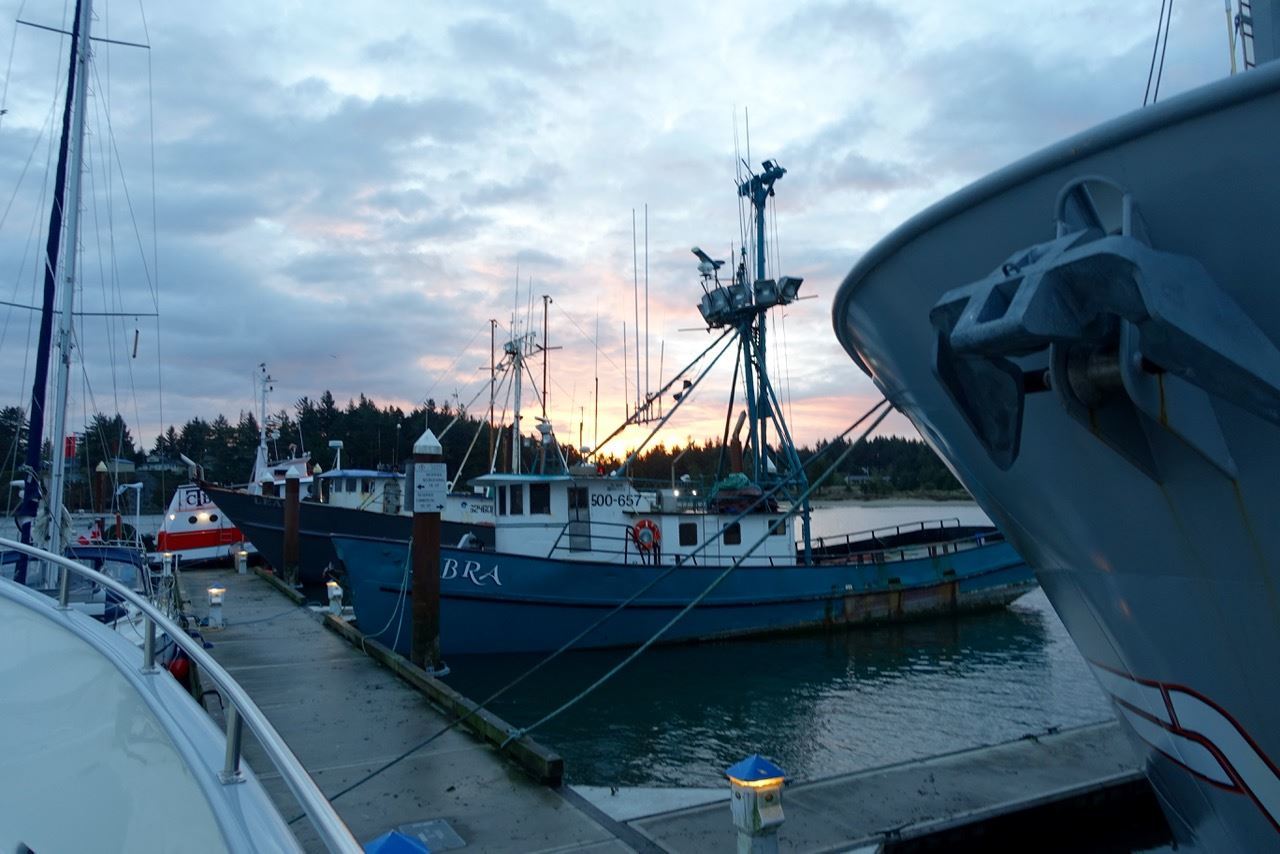 31 Oct Some Thoughts about our Passage (so far)

Posted at 17:32h in Blog, Seattle by Don and Sharry 4 Comments
Some Thoughts about our Passage (so far)

I have asked each of the four of us onboard to write a short Blog entry regarding thoughts about our passage, so far:

We arrived in Coos Bay early Sunday morning Oct. 30 at 0300. We were running ahead of a storm and were very happy to be in a safe harbor. We will be departing tomorrow morning, Nov.1, at 0500, again running ahead of multiple storms, and hope to be able to past San Francisco and on to Hawaii. We have options to take refuge in Crescent City and/or Eureka, California.

Finally I think that I have caught up on my sleep, have put all of the “stuff “loaded on Starr away, have organized the boat, and am no longer fearful about the very nasty weather. I feel as if I am the “glue” that holds all of the “domestic life” on the boat together; I guess that I am the “chief stewardess” on the yacht Starr, the cook, (but not the bottle washer-the guys do the dishes), and the person who can locate where items are stored. I also stand my watch 2x day, and I am the lead deckhand. Don is the Captain and Engineer, and Brownie and Duke are the “able bodied seamen”. We are a very compatible crew.

We started using PredictWind last year; PredictWind is a New Zealand weather forecasting tool and is proving to be very useful.

“PredictWind is the only company in the world that runs their own global weather model at 50km resolution with 2 sources. In addition 1km / 8km resolution forecasts are generated for popular regions around the world.

These forecasts (PWG & PWC) can only be found at PredictWind.

We also have a couple of very talented weather routing friends who have many years of experience, and we are privileged to have their support as well. We are not hesitant to look for the very best advice available. We’re not bashful about calling the Coast Guard to get advice before entering any of these coastal ports where we can encounter substantial waves crossing the bars. Before entering Coos Bay, I called Sause Brothers Towing who base here in Coos Bay, and talked to their Port Captain, Jeff Hill, to get his advice on entering the harbor. Jeff’s input was greatly appreciated. We had never entered Coos Bay before and we were anxious about entering at 0200 in the morning in pitch dark conditions.

Using hindsight, we know we should have departed Seattle a month earlier and let the boat sit in some harbor in Southern California. Our weather friends tell us that this winter weather system we are seeing is much earlier than usual. Possibly this has to do with the North Pacific water temperature being 2° or more colder than last year. We are clearly in a La Niña system.

This next 375nm will be critical. If we don’t get through this next piece of water in the next few days we may be sitting here in Coos Bay for quite an extended period, as there’s another major front coming through with no foreseeable end in sight. Once we are clear of San Francisco we should be able to start altering course to Hawaii.

Starr is ready, the crew is rarin’ to head back out and the weather is easing. So, on this day of Halloween we are still laying in Coos Bay, Oregon surrounded by fishing boats and the 86′ 1924 Ted Geary motor yacht Westward, famous as being the second yacht of her kind to circumnavigate. We were given a great tour of her this morning and marveled at her 100hp four cylinder Atlas Imperial engine. It is the oldest of its kind in existence and the sound of Westward underway is a sheer delight.

The lows have continued to march through and our weather planning, led by Don and Brownie, has been very intensive. If you plan your route long enough and precisely enough, the weather is bound to get better! Ours is a happy ship with Sharry keeping us exquisitely fed and Starr being fitted with every convenience for our comfort from heated floors in the heads, sparkling teak decks and an Italian espresso machine. With fortune and a continued good weather window, we hope to be bound for Hawaii tomorrow.

Starr’s passage to Hawaii is Lee’s and my last passage together. She is headed for her final resting place in Kaneohe Bay just as she wished. We are sharing a cabin as we did on our own boat, Wings. But this time in deference to her post-mortem status (ashes), she has been excused from the watch schedule and other rigorous duties aboard.

The trip out Juan de Fuca and around Tatoosh was particularly poignant. Each landmark brought back a memory of Lee when she and I were leaving Seattle in 2001 to go world cruising. Seeing the world from a boat was her dream. Sometimes the husband is the cruiser and the wife goes along. In our case, Lee was the cruiser and I went along. She was delirious with joy when we rounded Tatoosh in 2001 with the world on the bow.

Then as now, we were headed for the tropics. Lee loved the tropics and by yesterday it was already warmer. I was able to put on my Hawaii gear on only the second day (although only for a few hours). She will soon be warm in Kaneohe Bay where she can rest in peace. Meanwhile, she is already getting more sleep enroute than the rest of us. J