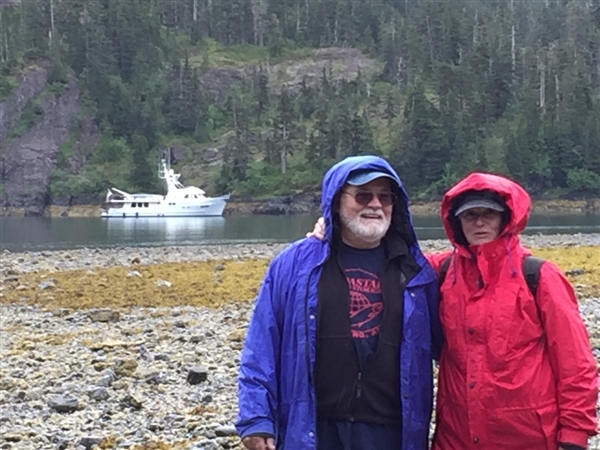 Posted at 12:41h in Alaska, Blog by Don and Sharry 0 Comments
On Saturday Starr punched out into the Pacific for the final time while Lori and I will be aboard. We had a twenty mile stretch at the southern end of Chichagof Island where there was no inside channel to protect us. Fortunately, it was another stellar day with light winds and nearly calm seas. After we cleared Chichagof we turned left once more and entered the narrow channels that run between Kruzof and Baranof Islands for the final twenty five mile run into Sitka. The channel was narrow and there was lots of fishing boat traffic heading in the other direction. The season opening for commercial salmon trolling was the next day, and dozens of boats were heading north from their home port of Sitka to be in position when the starting gun sounded.

We anchored in a cove just a couple of miles north of Sitka, a protected spot where two families who work in town have built homes on rafts moored there. The homes are just large shacks, but one of them added a second large raft and has an impressive garden growing on it. Potatoes, garlic, mint, strawberries, radishes and all kinds of flowers were thriving. Don and Sharry had met the couple that owned the farm on a previous visit so we went over in the dinghy to chat with them. They gave us some radishes, strawberries, and mint while we visited with them and played with their two dogs.

Yesterday we powered Starr the final few miles into Sitka. This is a busy place with planes coming and going, fishing boats and pleasure boats heading out to enjoy the weekend, and traffic ashore. We found a spot for Starr in the harbor on the transient dock just in front of Janice of Wyoming, a beautiful 130′ sloop that Lori’s aunt and uncle had sailed on. The mega yacht had just arrived after a ten day passage from Honolulu.

With internet access for the first time since leaving Seward, Lori and I got busy arranging our transportation back to Hawaii while Don and Sharry took off down the dock to reconnect with pals in the harbor who’s boats they recognized. Later we walked around town, visited the raptor center where injured eagles are rehabilitated, and tried a local brew in a waterfront pub. Team Starr had a nice black cod dinner out at a recommended restaurant.

Lori and I will enjoy one more day as tourists in Seward before we fly back to Hawaii on 7/3. We will spend a couple of weeks at home in Hawaii before returning to Sitka on 17 July for Chapter 2 of “Noodle and Lori’s Excellent Alaska Adventure”. We’ll be joining Matt and Vicki Dyer aboard their trawler “Thankful” to explore the waterways of SE Alaska before we work our way back towards Seattle.

Don and Sharry will stay in Sitka until after the 4th of July celebrations here and then take Starr south to her home port of Seattle. They are heading home in order to spend some time cruising with their granddaughter Kat before the summer ends.

This has been a thoroughly enjoyable and memorable cruise. We’ve seen a part of the world few get to see, have loved the comfort and seaworthiness of the mighty Starr, and enjoyed spending time as shipmates with Don and Sharry. They have been gracious hosts, and we feel privileged to have sailed with them.