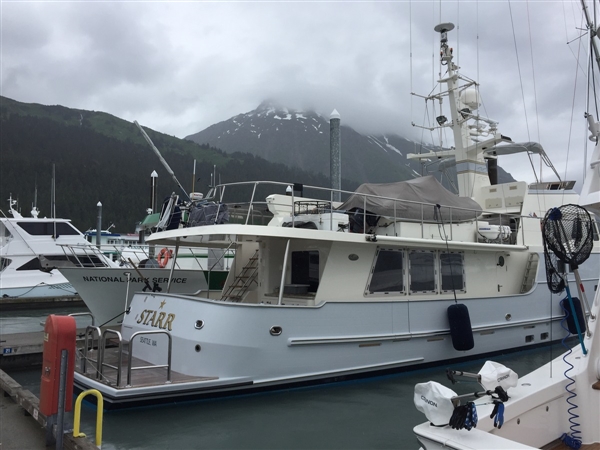 Starr powered the length of Marmot Bay and at 9AM made the turn at Marmot Island leaving Kodiak and Afognak Islands behind. It was a cloudless windless day for our 100 mile crossing of the Gulf of Alaska outside Cook Inlet. We passed a number of logs and mats of floating debris mixed with kelp, more than we’ve seen elsewhere on the voyage. The birds were out in force, and flocks of hundreds congregated on the surface between meals. As Starr approached, the startled birds took flight, filled the sky around the boat, and then landed again after we passed. I spotted a lone unmistakable orca fin slicing the water 100 yards away, but he showed no interest in us and disappeared.

The snow covered mountains of the Kenai Peninsula came into view when they were fifty seven miles distant. That’s some clean air.

The temperature climbed into the fifties during the day and each of us spent some time enjoying the warmth of the sun up on the flying bridge. The clouds started to roll in as the evening wore on and the wind increased from behind us.

Clay saw some pods of humpback whales lazing on the surface as Starr approached the islands guarding the entrance to Resurrection Bay.

Once again we had some lingering twilight to help us enter an unfamiliar port. We felt our way into Seward’s small boat harbor and found the empty slip a pal of Don’s had arranged for him. Starr was all secured at 330AM and we all hit the rack for some overdue rest.