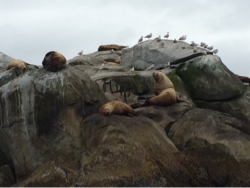 Posted at 14:13h in Alaska, Blog by Don and Sharry 1 Comment
There are hundreds of small islets here on the Pacific side of Chichagof Island and a maze of narrow channels between them. Most of those channels are blocked at some point by submerged rocks making them impassable, but in a few places a boat as large as Starr can wind its way deep into the mess and find a protected spot to moor. We were in one of those spots last night, with the stern tied to a tree ashore and an anchor holding us off the stones. It was completely calm in there. The evergreens surrounding the anchorage forced any wind that might be be in the neighborhood to pass harmlessly above us.

After Starr was snugly secured here yesterday we all piled into the dinghy and went exploring. We passed three sets of islets to get to the outermost group, and there we found herds of dozens of sea lions burping, barking, and basking on the rocks. They were fun to watch until we made the mistake of moving downwind and got engulfed in eau de sea lion. Yeech.

We returned to Starr by a different route, and I don’t think I could have found her in the twisting turning channels without the GPS iPad plotter Don had wisely brought with him.

Last night after dinner team Starr sat in the salon looking out the picture windows at the twilight lit scenery around us, sipped Zacapa Rum, and listened to Lori Lloyd recite Robert Service poems about Alaska.

We are continuing on our way south this morning after departing Don’s secret spot. A couple of minutes ago we just missed hitting a humpback whale that surfaced fifty feet in front of us. He slid by on our port side with about ten feet to spare.