Return Through Dangerous Pacific Ocean from Honolulu to Seattle 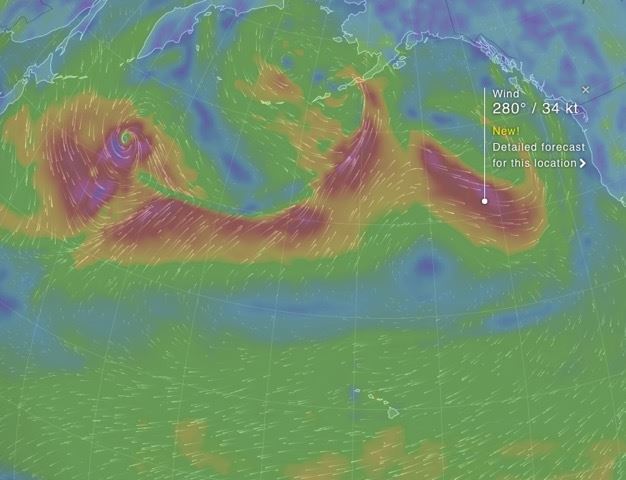 07 Apr Return Through Dangerous Pacific Ocean from Honolulu to Seattle

Posted at 21:32h in Blog, Hawaii by Don and Sharry 7 Comments
We are ready to depart Honolulu this Friday, April 8th, for the 2400nm passage back to Seattle.

The Weather Outlook
We are well aware that the weather is still a little dicey. There are some large low-pressure systems still coming out of the NW. The reason for our leaving this is early is to be in Seattle for Seattle Yacht Clubs Opening Day on May 7. Sailors from Summa Yacht Club in Kobe, Japan (Seattle’s “Sister City”) will be in Seattle for a sailing regatta with SYC. In 2010-11, when we were in Ashiya, Japan on Starr they rolled out the red carpet for us and made us feel very welcome. We would like to host them on Starr for Opening Day.

Suma Yacht Club Welcomes Starr – February 2011
We are using every resource available to us to analyze the weather. We download reports from Predictwind on a daily basis, but more importantly we have a weather routing friend who will be helping us stay on top of things. We also look at the weather picture using Windyty

Our CCA friend Joe Golberg just flew in from Lopez Island to join us for the trip; Donna Lee, our Paddling buddy from the Waikiki Yacht Club, is also joining us. We thought you might want to know a little about them so we asked them to write a bio for us:

I was born in Seattle Washington, a leap year baby on February 29, 1948, the son of a mother of a sailor. My first 18 years I lived on Lake Washington in Bellevue close to Enatai Beach. From the time I could walk I spent my summers cruising with my grandparents on our Owen’s Cutter in northwest waters. My grandfather had a Flattie (Geary 18) and he drilled me on righting the boat by myself and practice, practice, practicing landings. He used to say any idiot can sail this boat across the lake and back. Early on he bet me a 2hp Elgin outboard that I couldn’t swim from our dock to his, a couple of days later I jumped in at our house and swam to his dock, walked up to his house and made him take me to Sears to claim my won bet. My summers were spent leaving with my Grandparents in the spring and returning in the fall cruising Pacific Northwest waters from Olympia to the Broughton Archipelago in British Columbia. I started racing at Corinthian Yacht Club as a junior and crewed on many larger boats, Gary Philbrick from Mercer Island had a Geary 18 and I was his crew, our parents would to trailer the boat to regattas and drop us o for a week of sailing (and other mischief) as we weren’t old enough to drive.

After graduating high school I went to Alaska on a King Crab processing boat the “Deep Sea” and spent the summer northeast of Kodiak Island before returning to Bellingham for college. There I joined the Western Washington University sailing team. The next summer I returned to Alaska on the “Akutan” another processor and spent the summer out on the Aleutian Island Chain so early on had Seattle/ Alaska/Seattle trips by sea.

In 1969 I was lucky enough to join the crew of the 6metre “Goose” and we were chosen to race against an Australian 6metre in San Francisco (representing the St. Francis Yacht Club as they had on 6metres) winning the first Australian- American Challenge Cup. I was inspired to “run away to sea” and left school for a sailmaking career first at Northwyn Sails in Seattle, then with Buchan Sails

where I was fortunate to sail with Bill Buchan and crew with him on his Soling in an Olympic campaign. We won the World Championships in 1975 and fell just short of winning the trials in 1976.

After my tenure with Buchan Sails I was recruited to manage and own North Sails Seattle sail loft where I spent the next 10 years. This opened up many racing opportunities, multiple SORC’s in Florida, Italian Admiral’s Cup Trials on the Mediterranean, Canadian Admiral’s Cup Team with John Newton on Pachena and many other wonderful adventures both locally and out of the area racing o shore and one design. Most of my o shore experience has been racing but in recent years I have done coastal deliveries on the west coast from Seattle to San Diego.

After my sailmaking career I was a manufacturer’s representative for Avon, Simpson-Lawrence, Whale, Marlow and other quality marine products. I have lived aboard and cruised a Herresmho Rocinante, Alberg 35 and a Cal 2-46, which I lived aboard for 12 years, moving from Seattle to Lopez Island where I have lived for 24 years. I sold the Cal and purchased an Express 37 (Carl Schumacher design) and fast cruised that (fast, fun and simple) for10 years locally, sold that and now have a Beneteau 42CC which I continue to cruise extensively in the Pacific Northwest.

I am a lifetime member of the Seattle Yacht Club and am honored to be a member of the CCA-PNW station. Currently standing by in Honolulu with Don and Sharry Stabbert on “Starr” preparing to depart for Seattle.

“The Sea’s in my veins, my tradition remains, I’m just glad I don’t live in a Trailer”

Hi I’m Donna and I’m very much looking to doing this passage to Seattle with Don and Sharry.

I had a career in Florida teaching and doing research at UF as a professor of agricultural and natural resource economics. After 13 years in Florida I decided I really wanted to be to Hawaii so I put my Florida house up for sale and moved to Honolulu near Diamond Head and Kaimana Beach. Right away I got back to all my favorite activities snorkeling, canoe paddling, and sailing. In 2009, I was joining friends for a fun sail trip to Maui but when two sailboats were consolidated to one, crew quarters started to look very cramped. That’s when I met Don and Sharry. They were headed to Maui the same evening and were kind enough to ferry me across. I enjoyed a smooth comfortable ride and I got a good night’s sleep. In the morning they drove into Lahaina Harbor, pulled up to the stern of Dusty Cash. I climbed off, waved goodbye, and Starr took off like a shot. Ever since then we’ve remained friends. Recently we started paddling our 1-man canoes together. Our friend Brantly organizes an early Tuesday morning pup sup where she brings Poi and her SUP and we all paddle out together enjoying a fresh start on the morning. It’s always fun. We come across rainbows, turtles, dolphins, whales, Hawaii 5-0 actors, mysterious floating luggage, and even an occasional shark. We never know what we are going to get but for sure we always get to see the sunrise. The regular pup sup paddlers include Brantly, Donna, Dave, Don, Sharry, Pat, Nicole. Guest paddlers include Nic, Rebecca, Joey, Rob, Robin, Katy and several more.

For employment, I have positions with the UH and Maui college analyzing the economics of local food and innovative local food products in Hawaii, and assessing the benefits to producers, consumers, farmers, and workers.

In my spare time I enjoy playing ukulele with my friends in our Park Rats band. This past January 2016, I joined a local choir group, Voice of Aloha, and am having an amazing time rehearsing and learning about chorale singing.

In Seattle, I’ll visit with my cousin Terry. From there I’ll fly to the Bay Area to spend time with Mom, family, and friends in Fremont, CA, then I’ll fly back to Honolulu where I’m looking forward to paddling with my Ikaika friends, Nicole, Brantly, Dave, Katy, Karen, Rudy, John, Dan, Lorraine, Coach Shelley and Coach Phil.