Rescue on the High Seas 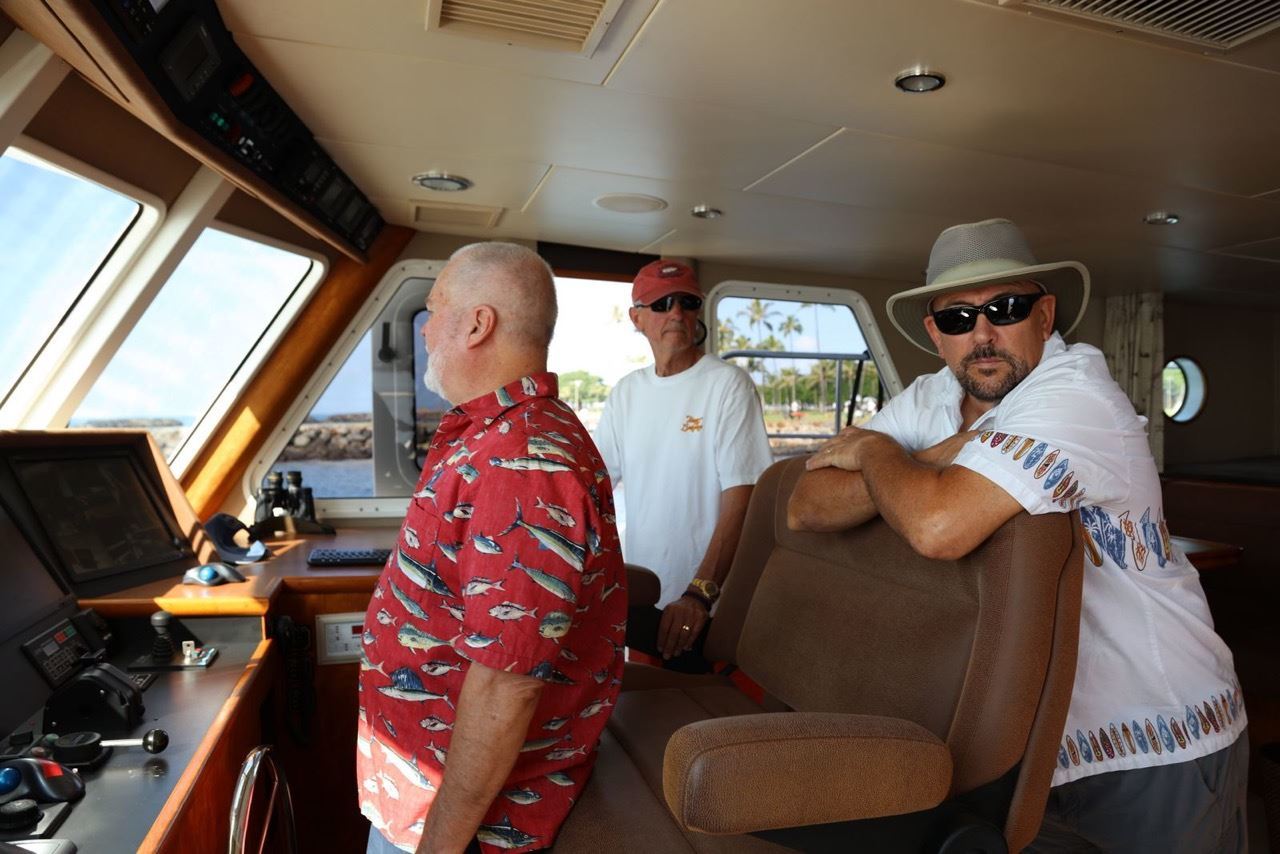 15 Dec Rescue on the High Seas

Posted at 16:37h in About Early Years, Blog by Don and Sharry 2 Comments
Our dockmate James Ellingford on the Nordhavn62 from Australia has posted this on his Pendana Blog ( http://www.pendanablog.com). James knows how to tell a good tale . . .

Rescue on the high, I mean Hawaiian Seas……

“James, how would you and Claire like to go for a nice relaxing cruise?” said, Captain Don of MV Starr. “Sure, sounds like fun!”

The day started like any other, but today Claire and I were to board the mighty MV Starr for a relaxing cruise out into the blue abyss of the Hawaiian seas. Also aboard for the ride was Mickey Smith (marine electronics guru to the stars) and his charming wife Snow, Steve Scalzo and Kerri Wood who were slowly but surely defrosting after just arriving from a rather cold Seattle and local, Chris Clothier, from the Waikiki Yacht Club. Our generous hosts were of course Don and Sharry from MV Starr. All in all, nine adults all with whom have a fair bit of ocean going experience and the knowledge to fix most things at sea. This knowledge was to come in very handy indeed.

Don, Steve and Mickey (wearing hat) as MV Starr leaves the confines of Waikiki Yacht Club
The day was perfect and MV Starr was purring like a kitten doing a sturdy 9kts drinking a respectable nine gallons per hour. The sun was shining, the birds tweeting, not that I could hear them but trust me they would have been and the ocean was a magnificent deep blue. What a lovely day out this would be as a calm relaxed state came over all of us aboard the mighty MV Starr. A calm that was not going to last long.

MAYDAY-MAYDAY-MAYDAY. A young voice on the other end of the radio somewhere was conveying to US Coast Guard that they were sinking. Yes, SINKING! We soon realised that the vessel in question was the Maverick, forty footer, with a father and son on board. Don, without hesitation quickly changed course and headed directly towards the vessel in distress, while Steve and Mickey prepared the emergency pump on the rear deck and I took over communication with coast guard and the vessel in distress with my main objective to try and reassure the poor child on board that he was not, in fact, sinking. Having me try and reassure a child that all is ok is like having Goliath try to reassure David that he is really a nice guy!

MV Starr comes alongside the Maverick to great relief of the young child on-board
Don manoeuvring MV Starr with the precision of a brain surgeon on a very, very good day
Within minutes Mickey Smith, yes, THE Mickey Smith was on board the Maverick and he soon went below. Steve passed Mickey the hose so that he could start pumping the water from the vessel. The Maverick and MV Starr were now connected like a mother is to her newborn child in a dance as the sea moved beneath both making an already difficult duet even more challenging.

Maverick and MV Starr now joined as one
As Don kept MV Starr in the exact position required, to allow both vessels to remain joined while the pump went to work extracting the water from Maverick’s engine room the seas started to pick up and some large rollers came through. With each set of rollers MV Starr held firm and with Don’s skills being put to the test both vessels moved in the ocean as one, as if in a world class ballet performance, with few lucky enough to see.

Fifteen minutes later Mickey Smith emerged from below the Maverick announcing that the vessel was fine and that he had sorted out the issue with the through hull at precisely the same time the US Coast Guard turned up.

Don, asking very nicely that they (the US Coast Guard) not get too close
With Don’s encouragement they soon moved further away from MV Starr’s shining exterior
Twenty minutes had passed and Don still had both vessels connected via his emergency pump while the US Coast Guard, were being briefed by Mickey Smith on the Maverick.

Still connected
The little boy aboard the Maverick looking a whole lot happier!
Now, all we had to do was get Mickey back on-board MV Starr and while my suggestion to make him swim for it was considered it was soon discounted by Captain Don and most aboard. Hey, all I was trying to do was get few action photos for the blog….really! With some very careful manoeuvring both vessels were close enough for Mickey to make the leap of faith.

Mickey preparing himself
Mickey makes it safely onto MV Starr
Me taking some action shots so this blog would be possible.
Kerri attending to Mickey Smiths injuries from his time aboard the Maverick
Sharry and Chris grateful the mission to save the Maverick was a success!
Claire grateful Mickey made it safely aboard
Snow, Kerri and Steve having some fun after a busy day on the water!
Next time Don says, “Hey James feel like coming out for a nice relaxing cruise on MV Starr”? I may think twice!

(and Don and Sharry)