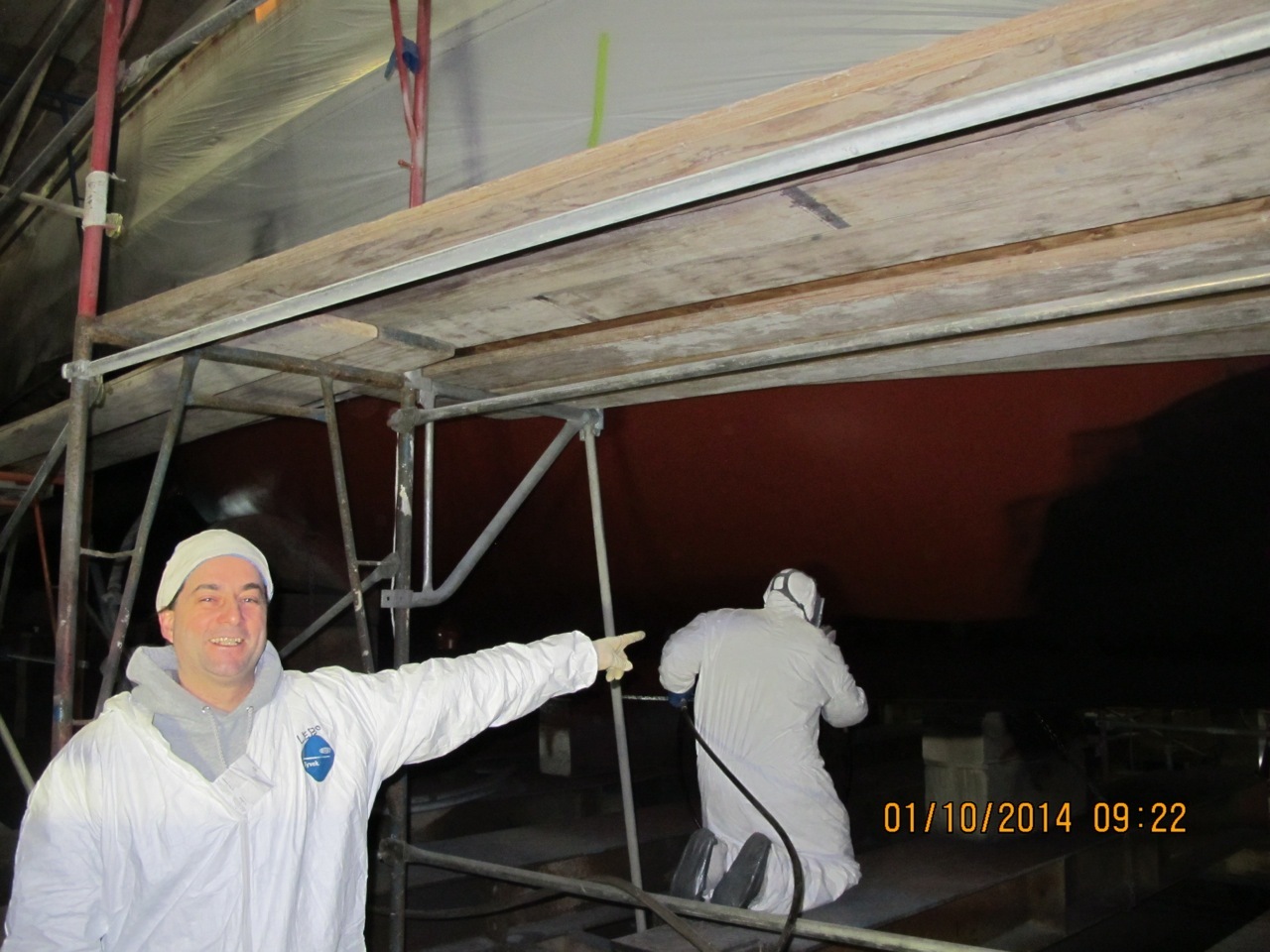 We are starting to see the results of hundreds of hours of backbreaking work. The fairing is mostly completed. Last weekend APM (All Points Marine) sprayed on the epoxy high-build primer; we are using AwlGrip’s Ultra Build.

This high-build primer goes on thick (28mil), and then will be sanded down for the finished surface.

High-Build Primer ready to sand to as “smooth as silk”

Fred Jahaske, one hard working guy who is happy to be moving onto the painting stage

I stewed over what bottom paint to use, and finally decided to use AkzoNobel’s International Commercial Paint, rather than their Yacht Paint (which they sell under the name of Interlux). We used the international Interspeed bottom paint when we last did the bottom, two years ago in Honolulu and that worked OK.

Our International Paint Rep suggested we get advice regarding the particulars in applying International’s commercial bottom paint from Taylor Pennock. Taylor has applied this bottom paint on hundreds of fish boats, and knows what to do and what not to do. It is great to have experts like Taylor who freely share their knowledge.

Dana is very, very happy that he is mostly done with the dusty grinding and is finally applying paint.

So there you have it: Bronze followed by Aluminum for the barrier coat , followed by antifouling in Black and Red, and finally the top coat will be Blue.

Inside in the Wheelhouse Tom Moore is installing box after box of new electronic gear. Our radar and navigation systems are all “Black Box” but we are using off the shelf NEC monitors, the brains are still big boxes that are taking a lot of space under the dash.

In the Engine Room, Dave Schmidt and I opened the port fuel tank and we were assuming that we would be opening all four fuel tanks and would have to climb into them to clean them. I had last opened and cleaned the tanks in 2009, and at that time they were like a dirty bathtub that a muddy football player bathed in for a year without ever cleaning up after himself.

What we found this week was a very clean tank where a wipe-down produced nothing more than a dirty hand towel.

The port tank is 17 feet long

Dave climbing out of a very clean tank

Up topside Sharry is going over the new wallpaper selections with Richard Liepelt.

We have retained Richard to help us with our finishes. Richard is VP of Operations at Citadel Marine Center in Tacoma; Kevin Jaffe, owner of Marama, a Delta 124 Full Displacement Expedition Trideck, referred Richard to us. SBMC was Marama’s Homeport during the winter of last year.

Marama has the finest paint job that I have ever seen on a yacht, and Richard Liepelt was Kevin’s Project and Paint Manager on his last three boats, including Marama. Diamond Painting painted Marama at Delta Marine. We wanted to have our work done at Delta by Diamond, and we were on their schedule to paint in 2015, but we decided that the paint was deteriorating rapidly in the tropical sun of Hawaii and we needed to do it sooner, rather than later. Delta and Diamond were both booked out over a year on their paint commitments, so we figured out how to get it done NOW. We told Richard that we wanted paint quality very close to what they achieved on Marama, but we didn’t want to wait another year. Richard said he had just the guy to produce the quality that we are after, and introduced us to Dana Lebo and his partner Bill Kennedy at All Points Marine.

Richard Liepelt, Dana and me

Back in the Engine Room, I’m getting hydraulic layout advice from Paul Hoffman, owner of Pacific Marine Hydraulics.

I’ve mentioned Paul before and I’m going to again say that Paul is probably the best hydraulic stainless tube guy in the Pacific Northwest!

Paul Hoffman on a Combination Seiner next to his work

Paul commented on our hoses being over 5-years old. On some of the boats Paul works on, like Starbound, the owners have their hydraulic hoses replaced every 5 years.

Paul does all of Starbound’s hyraulic work

The dates on our hoses read that they were manufactured in the first quarter of 2008.

Speaking of when things were manufactured:

Where and when was our Cummins NTA 855 main engine built?

Dave was under the engine this Friday and looked up to the bottom of the Cummins oil pan and here is what he found.

Stamped on the bottom of the oil pan of the engine: Made In Japan 1936

There has to be an interesting story about this; I wonder how to find out what it means?

Does anyone have any ideas?

AND THE WORK GOES ON:

This week we will be installing the wheelhouse cowling, sealing up the fuel tanks, and prepping the exterior hull for it’s primer coat of paint.