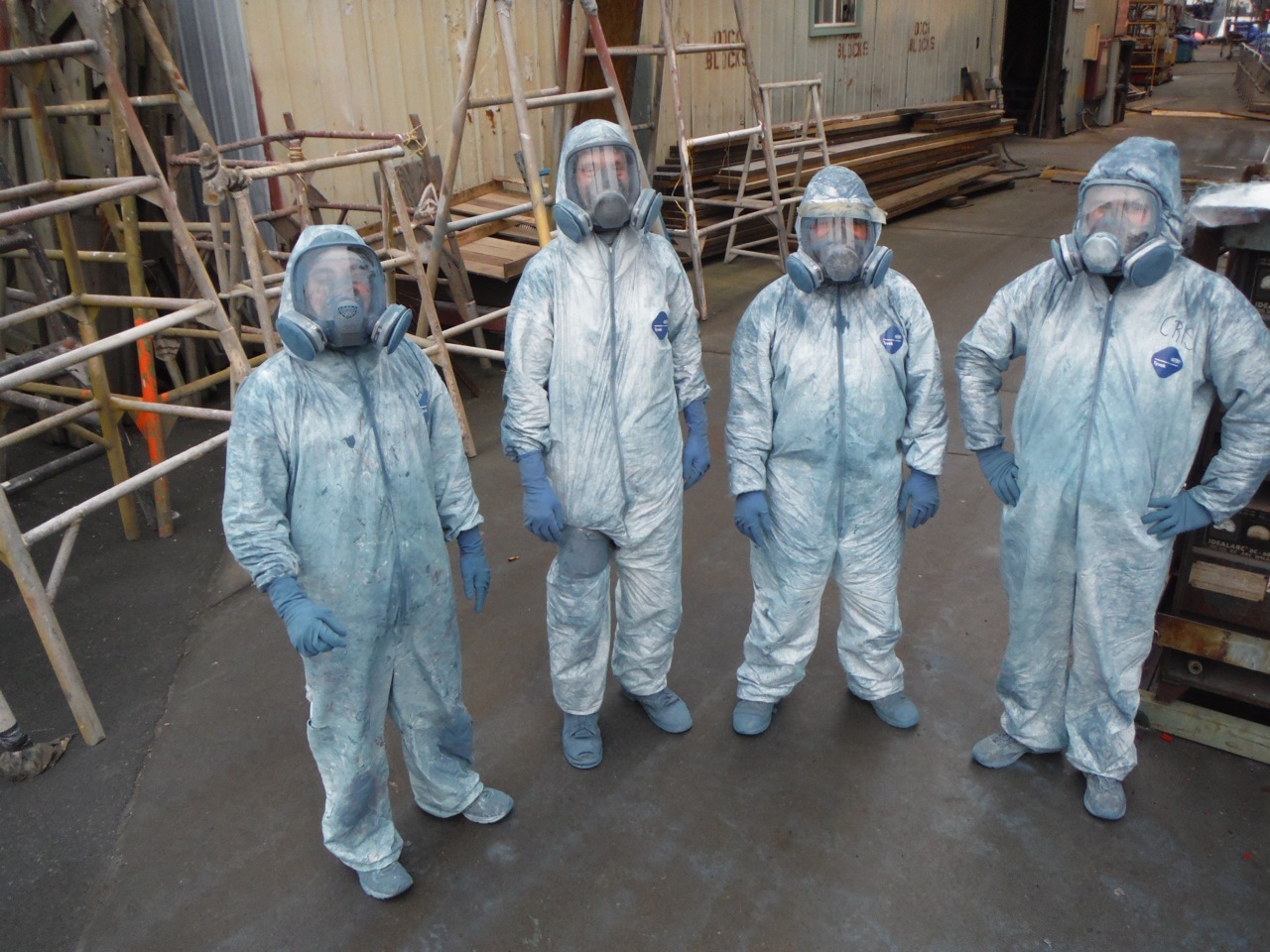 Weeks of Nov. 25 to Dec. 13 – It’s Snowing Inside the Boat Shed at PacFish We are nearing the end of the itchy fiberglass sanding work. Since my last report we have removed the transom and top deck forms. Sharry calls me “Frosty the Snowman” when I come home from work, and it’s not because of the recent cold weather but because I am covered with fiberglass dust.

Our work on Starr is Itchy and Noisy! Here is a short video looking down the port side deck:

And another where Pablo is die-grinding on the top deck

The transom with the foam removed

The top deck with the form removed

By this past weekend Dana and his guys had finished one full week of grinding away 16 years of accumulated bottom paint. They masked the bottom from the boot stripe down, and ground off the bottom using 8″ grinders with 40 grit paper. It was a very messy job.

The bottom is masked off

Here is what they looked like all week long

The Men in Blue, Dana and his guys

While Dana and his crew were glassing and grinding the connections between the existing and the new sections, we (Randy, Dave, Tom, Nick, Brandy and I) were inside working on the mechanical and electrical systems.

The grey water tank top manifold was rotten, so Nick Parks is building a new one and replacing the PVC piping with Mepla. Mepla, is a triple layer of pipe which consists of an inner layer of cross-linked polyethylene, a middle layer of welded aluminium, and a protective outer layer of HDPE.

Brandy with the polisher

Brandy back on board Starr looking for tools

Back outside we (Dana, Pablo, Chris, along with Randy and I) were attaching the pre-laminated transom deck. The top was loaded down with 12×12’s to compress the pro-set adhesive connection.

The transom loaded with 12×12 timbers for compression

Dana with jig for shaping the gutters

Now that the transom deck is in place, we are getting ready to make the patterns for the new teak decking. I did get a bid from a well-known national teak decking company that does a lot of work for our Northwest boat builders. Paul Zimmer, who is the partner at S3 Maritime, heard that I was about to let the bid, and Paul suggested that I talk to Adam Karpenske, a young and talented local shipwright. I wasn’t aware of Adam working in our neighborhood, but given the choice, I prefer to give my business to our local craftsmen.

While I’m talking about talent, I’m continuously amazed at the talent that exists here in Ballard, “the center of the maritime universe”:

A few days ago I went looking for Chuck Albertson, who was just finishing managing a “new build” 58ft x27ft combination fishing boat which can carry over 200 tons of fish. Northern Marine had just launched the boat, and Chuck was overseeing the final touches here in Ballard. Chuck said the boat was tied up next door to Starr at Ballard Oil. I went next door to find it, and saw a Seine boat that from a quick glance looked new, and I scrambled over the rail.

The Arctic Fox from Petersburg, AK

What caught my eye first was the beautiful stainless hydraulic piping. Out of the engine room walked Paul Hoffman, the hands-on owner of Pacific Marine Hydraulics. I also noticed that the boat I’m on isn’t the one Chuck was managing. The worn wood-clad decks show that this boat has been hard at work. Paul told me about this boat, and it is one highly productive fishing machine. Paul installed the hydraulics on the Arctic Fox several years earlier. Daniel Crome, the 30-something-year-old Skipper/Owner is from Petersburg, Alaska and works 5 different fisheries. The single screw boat runs 11 months of the year, fishing King Crab, Salmon, Dungeness Crab, Heering and Sardines, and ranges from Alaska to Northern Oregon.

These hard working machines are all single screw and can’t afford any down time.

One of many details that Paul was pleased with on this boat included the through-bulkhead JIC unions that are CNC cut and fabricated at JK Fabrication. These unions allow the 3000psi hi pressure oil to connect leak free thru the bulkheads and deck plates. http://www.jkfabrication.com

Paul had the hydraulic valves Hot Spray Zinced, and then epoxy painted. They look like new after years of continuous duty. What he didn’t mention, but is clear to me is that his stainless tubing workmanship is “pure art”! When Paul sends his work to sea it keeps working!

I finally caught up with Chuck. He had moved the Optimus, the new Northern Marine Combination Seiner/Crabber/Everything, over to the West Wall at Fisherman’s Terminal.

The Optimus from Sitka, AK

The hydraulic system on Optimus was built right next door by Puget Sound Hydraulics.

Take a look at the Stainless hydraulic piping on Optimus

Meanwhile back in Starr’s engine room, I’m “re-arranging the furniture”. I’m moving things around: like changing the orientation of the sea chest, moving the diesel furnace from the port over to the starboard side, replacing the hydraulic manifold with a more compact one made of stainless, and relocating the pumps for the A/C system for easier servicing. I’ll talk about that some other time.

Next week we will be moving on to more fairing, and our goal is to have the fairing completed by January 1 and start working on priming the hull and house.

It feels good to be putting this awful, noisy, messy, nasty, dirty work behind us.