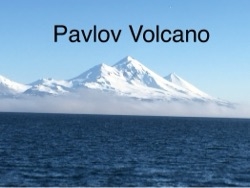 Posted at 14:16h in Alaska, Blog by Don and Sharry 2 Comments
I took a four hour nap after getting off watch at 4AM, and came up to the wheelhouse in the morning to find Starr landlocked in a maze of channels between the Alaskan peninsula and some offshore islands.

We had intended to head up the coast well offshore, but we met a fisherman in Dutch Harbor who was kind enough to come down to the boat and mark up our charts showing us the favored routes and hidey holes the locals use. His suggested route took us where we are now, in a scenic wonderland of snow covered volcanic peaks and barren rugged islands.

Clay said that Belkofski Bay, which we were leaving when I came up, was full of humpback whales lazing on the surface.

Just before noon we passed two forty foot cruising sailboats headed in the other direction under power. We spoke to a gal aboard one of the boats over the radio. They were cruising in company out of Sitka and bound for Attu, one of the westernmost islands in the Aleutians. “What’s in Attu?”, Don asked her.

“We like to hike,” she replied, “and there’s no brush there on the slopes to scrape your legs on or slow you down.” Hmmm. That’s a couple of boat loads of motivated hikers.

We spent the rest of the day working our way to the northeast up the Alaskan peninsula, enjoying the scenery.

Some of the fishing boats here burn unbelievably bright lights at night. It was 100% overcast last night so it got dark for a few hours. We passed a boat heading the other direction in the darkness a half a mile away with an obnoxiously bright white light burning on his mast. We almost had to put sunglasses on to tolerate it. The light, which I suspect was visible from the ISS up in space, completely washed out his running lights. Later on my watch I encounterd another fishing boat similarly lit, but I couldn’t find him on the radar or AIS. It looked like he was 100 yards away from us, so I called Don for a second opinion. He zoomed the radar out further than I had and found the vessel ten miles distant. That was a bright light.

The approaching low we are watching continues to haunt us. We skipped our planned anchorage at Canoe Bay to give us more breathing room. We were hoping to be able to stop tonight in Geographic Bay, just across Shelikof Strait from Kodiak Island, but this morning’s forecast says don’t dally. We will probably power right on through to in order to beat the bad weather into Seward.