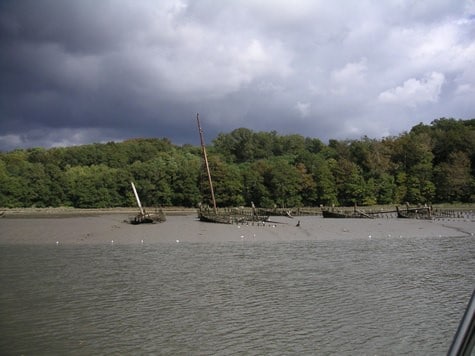 A Voyage at Sea M/V Starr: Le Rochelle, France to Palma, Spain As I woke to the familiar rolling motion and the drone of the large diesel engine I could sense it was already daylight. I had no idea what day of the week it was, but from the sun’s two warm glowing spots on my cabin wall I knew our direction. I knew, while I was sleeping, we had made “the turn” we had been talking about for days. By the time I finished my watch at 2:00 am earlier that morning I could see that famous point of land many miles ahead on the large radar screen. After my evening three hour watch, 11:00 – 2:00, I woke Jean Claude Oudry, the Frenchman from near Rochelle, so he could take the next three hour watch. He was followed by Sharry who enjoys that magically wonderful experience of “sun rise at sea”. Our crew of four is complete with Don, our captain, navigator, morale officer, and engineer. I always enjoy coming into the pilot house in the morning to see how the wind is interacting with sea and if there is sight of land or any other boats. The new day was an exciting time on board shared over Don’s strong “cowboy” coffee, as Jean Claude called it. After a long night of limited visibility staring at dimmed CRT screens and listening to music or books on tape, the crew was ready to exchange details about the events of the night before. What ships past in the night, how many miles made good, and how the wind and waves had changed size and direction. At eight knots our momentum seemed slow during the day but after several hours of rest the progress was more obvious. Refreshed I happily relieved Sharry and take a morning watch she would busily tended to the ship’s many other chores. On this particular morning I climbed the stairs to the pilothouse excited. I knew I would see what navigator and famous explorers had sailed past for centuries. I knew this was called “the end of the land”, the Western tip of Europe, when the world was thought to be flat. Caesar sailed past our position in 61 BC and all the great English, Portuguese, Spanish, French sea explorers followed him. There, in all its glory, was Cape Finisterre, the Northwest tip of Spain. This barren point was solid granite, about 1,500 feet high and could be seen from many miles away. In the sunny blue sky morning with comfortable following seas it did not seem so dangerous, yet a few days earlier we waited for 5 days for a 40 knot gale force northerly to stop blowing. We had been waiting out the storm in La Coruna, Spain only a 12 hour run away. If we had been sailing a slow awkward square rigger and not been receiving weather reports updated hourly from the new NavTech electronic receiver we could have easily been smashed on the rocks of this lee shore. Experienced captains have always paid substantial respect to these hazards of navigation. Don and Sharry have tremendous respect for the sea and the weather that controls it. Coupled with their years of experience together they run a very safe and well organized ship. Bringing people from different backgrounds together to co-habitate on a small boat for several days is often a difficult social challenge. In our case, we were four very compatible crew members that I hope will be able to sail together again some day. A few days later I enjoyed the same exciting experience when I woke to see the entrance to the famous “Straits of Gibraltar”. And later that day we docked in historic Gibraltar and spent a few days exploring “the rock” and learning about this supremely strategic mountain of rock that juts right out into the narrow passage between Spain and Morocco.

Peter Trogdon, a friend from Annapolis, MD
(And a GREAT crewperson! Don and Sharry)