Our summer on the Atlantic Coast of France 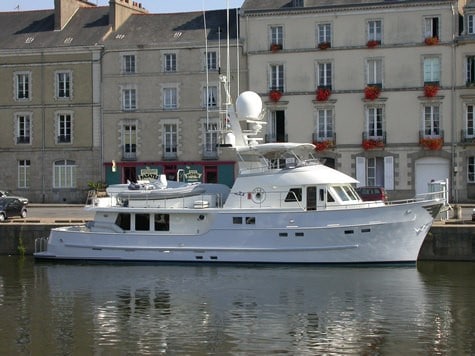 01 Mar Our summer on the Atlantic Coast of France

STARR arrived in La Rochelle on July 6, 2003. On our second day in this charming seaside town we went to Le Marche, the year-round daily farmers market, and decided to make La Rochelle our home base for the remainder of the year. We were partly tired from just finishing our Atlantic crossing and we were partly weary of the past two years of constantly moving across the huge distances of the South Pacific from April to October in order to arrive in the safe harbor of New Zealand by the beginning of the cyclone season. Now in Europe we studied the charts and said “its only 200 or 300 or 500nm from here to there”, instead of the 1000+nm (5 or 6 days) necessary for many of the passages between island-countries in the South Pacific. In spite of “freedom fries” and all of the misunderstandings that they represent, we found the French people on the Atlantic Coast to be friendly and helpful to Americans who could barely speak enough French to be polite.

We fell in love with France and with our new French friends. We were charmed by the 14th century towers that guard the Vieux Port of La Rochelle and the ambiance of this nautical center. We adored the fresh seafood, the fish, oysters, mussels, and assorted shellfish that we had never even seen before. We swooned over the salad greens and seasonal fruits and vegetables, especially the tiny, succulent, sweet melons. And the baguettes that come in all shapes and sizes and must be bought fresh every day. And croissants with our café crème for breakfast. And we learned that you don’t just drink white wine with chicken and/or seafood and red wine with meats; but a specific kind of white wine, maybe a Muscadet, with shellfish and specific kind of white wine, maybe Sancerre or a Graves, with a specific kind of fish, etc. (You get the idea.) Besides having to learn French, we had to learn food, and wine and 350 different kinds of cheeses that are made in France . . .

We cruised up and down the West Coast of France and explored the rivers, sometimes traveling 50 nm or more inland to places that once were great river ports of France. In Southern Brittany we rode our bicycles to the megaliths at Carnac and ate gallettes (buckwheat crepes) with hard cider at a little farmhouse next to the fields of huge “standing stones”. We squeezed STARR into a tiny basin with locks for gates on an island with fortifications designed by Vaubin, the Royal designer of fortifications for King Louis IV. Just outside this “safe harbor” the outer harbor would go completely dry leaving boats with solid bottoms leaning against the walls, sitting in the mud until the tides came back in to fill up the harbor. Then the lock gates would open up and a parade of boats would depart for their next holiday destination and another parade would parade in.. After squeezing into and out of a narrow locks that controls the river tidal flow, we traveled 30nm up a beautiful river to what was once an important river crossing, and walked the cobblestone streets of a village settled in 980 (more or less) by Vikings. Here, we anchored in the river under the remains of a tall bridge destroyed by a German mine during WWII. Just a sampler of the France that we discovered by boat and eagerly explored, good food and history surrounding us everywhere we went.

And there were sailboats everywhere. All summer, up and down the coast there were “flocks” of small sailboats full of little children learning to sail, medium-sized sailboats with medium-size children, and even bigger sailboats full of eager teenagers. There were classic wooden sailboats with Frenchmen, “persons aged”, single-handing. In mid-summer we discovered a fleet of about sixty twenty-one foot sailboats preparing for the Mini-Transat, a single-handed race in July from La Rochelle to Brazil (Seattle’s own Jonathan McKee was one of the competitors). Later in October there was a smaller fleet of sixty-foot racing sailboats preparing for the Transat, the double-handed version of the earlier race to Brazil. Although we were cruising in our powerboat, we felt as if we were a part of a special club. The West Coast of France is sailboat heaven, and since we were aggressive racing sailors in our previous life: first in Thistles, then in a Cal 3-30,and finally moving up our beautiful Cal 40, Lord Jim.