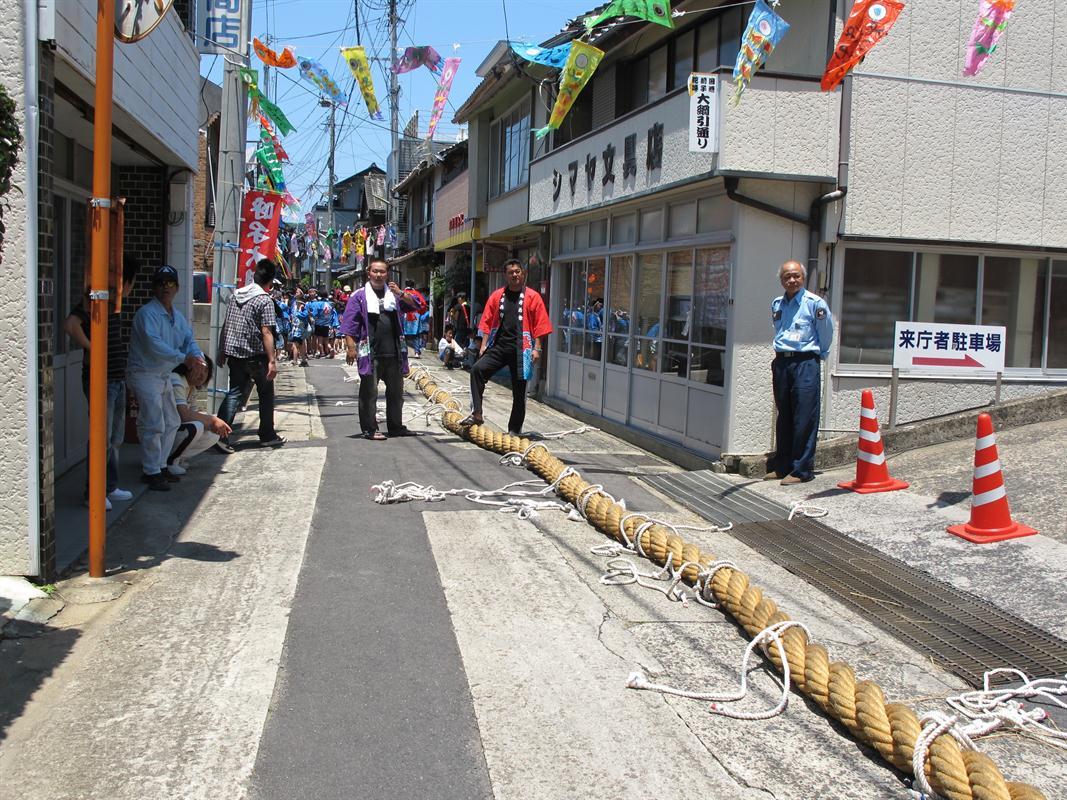 We stayed in Yobuko mostly because we loved the intimate feel of the small town and because we made so many friends. We also stayed because there was a festival on Saturday and Sunday, the Otsunahiki (“the Rope Pull)”. As quoted from the local tourist brochure: “In ancient time, when Hideyoshi Toyotomi was camping at Nagoya Castle for the war, he let the soldiers and the people there tug at ropes to encourage their fighting spirits. It was the beginning of this event. The people (including old people) of this town are divided into two groups and tug at the 15 cm in diameter and 500 m long rope.” The festival for hundreds of years has become a contest between the “hill people” (farmers) and “sea people” (fishermen). Legend says that the winner of the contest is assured of a good harvest in the coming year.

Whatever the legend says, the festival is a great party. It all takes place on the narrow back street between the two rows of houses and shops. At the center point of the rope is a big egg shaped mound of woven rope, with a net of smaller lines tied around it to give a handhold. During the Otsunahiki kids (on Saturday) and adults (on Sunday) stand on top of this mound, and like cheerleaders urge on their team. The winning team has to pull this large mound, with several people on top, so that it is completely on their side of the red line painted on the street.

On Saturday the kids battle it out . . .

Center Point-note the red line painted on the street

And on Sunday, the adults really battle, but the center egg shaped mound has been doubled in size and men jump on top and add their weight to the contest.

This festival has been going on for 400 years and many people who were born and raised in Yobuko return home for the occasion; everyone dresses for the festival, even babies

Don and Sharry in festival dress

A Festival is an excuse for the Japanese to have fun, and everyone has a really good time.

Sharry with the Party Boys

On Sunday the Festival is held at the bottom of the stairway to the shrine, and starts out quietly enough with the blessing of the priest

As the “Rope Pull” gets underway the egg shaped mound moves a little one way and then back. This goes on for a while and everyone is pulling really hard. The energy increases and grows to a frenzy. . .

The team that wins the best of three attempts is the winner, and between rounds both teams collapse and rest.

Everyone gets involved: men, women and children, the old and the very young . . .

Saturday was a good party; Sunday was a brawl. The farmers won the contest on Sunday and we were told that the fishermen drink too much beer and usually lose. No one really cared. As we walked back to the fishing harbor to Starr, we were invited into several homes along the way where families and friends were drinking beer and enjoying the day. The Japanese work really hard and when they stop working to party, it’s a REAL party!!