On Entering the Garbage Patch 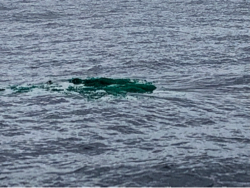 25 Aug On Entering the Garbage Patch

We have been underway for 5 days with 7 more to go to Hanalei and are 650 NM off the coast of California having run 1000NM since leaving Seattle.

As I am writing this, a school of dolphin came to play with us. We have only seen two ships since leaving the coast, both of them today. We are running two radars, one a Furuno FAR 1518, set at 12NM range and a Furuno FAR 2117 set at 24Nm.

During my 0330 watch the Furuno FAR 2117 picked up a target 24NM ahead of us. The AIS target finally showed up when the vessel was at 16NM giving us the detailed data of the vessel. The ship was the Danish Tug, Maersk Transporter, 240ft x 65ft an anchor tender, running at 14Kts, heading for Vancouver. When the tug was 6NM off of our port beam we had a chat. The tug was returning from a mid pacific project for Ocean Cleanup. I asked the captain what we should expect to see ahead, and he said that we would likely see a fair amount of nets and garbage to the SW, which is directly ahead of us. He also thought our landside friends might learn more of what he had been doing by going onto the Ocean Cleanup web site. Unfortunately, we don’t have internet access, only our limited connection using Iridium GO! which sends and receives at 50-150kbytes.

We are now coming across more floating chunks of Styrofoam net floats and a number of 12” diameter black poly net buoys. We have decided to try a different watch system where during the night there are two standing watch with 3hrs on and 9hrs off.

We have picked up nets and lines on previous passages. If we detect a small change in sound from the engine or vibration in the hull our first action is to immediately put the boat into neutral, so we don’t tear up the reverse gear and propeller drive assembly. It’s important that the watch stander is attentive. Music is fine as long as we can still hear the engine. At 2am on the 2011 passage from Japan to Hawaii, I was in my bunk below the wheelhouse and heard the engine shutdown. When I got to the wheelhouse, I asked our friend at the helm what happened, and he said “What”? He was using his iPad to find stars and the iPad slipped and hit the engine kill button. The engine was so quiet and he was so concentrated on the stars that he didn’t notice the shutdown.

Break!! Wouldn’t you know! Sharry just spotted a bright green net which was about 10ft across and who knows how deep. Noodle immediately let out the fishing line and he had a hookup. Not only did he have a Mahi Mahi, but a whole school of Mahi Mahi followed the hooked fish right up to the boat. The Mahi we boarded was 40” long and maybe 10-12#. Total time between hookup and fish into the fridge was 45 minutes. Time not underway about 10 minutes.

Our process for removing nets and lines in our running gear is as follows.

Immediately stop the prop from turning.

Get the GoPro under the boat to see what is going on.

We have a live deckside camera hooked up to the GoPro so we can move the camera around to see all angles of the prop and stabilizers.

For night viewing we have bright LED underwater floods attached to the camera pole.

Our first action is to try to use the Spurs to cut up the tangle.

Our next action is to get into the water and use tools including a pneumatic saber saw with an assortment of blades for line and cable. Also included is a pneumatic hi-speed cutting wheel with metal cutting blades.

Our diving gear includes Hookah with a full-face mask as well as conventional scuba gear and tanks.

Our real asset is our friend/crew Clay Hutchinson who was a professional diver!

Tonight’s dinner will be Mahi sautéed in olive oil, butter, with capers and lemons along with brown rice and a green salad. YUM!