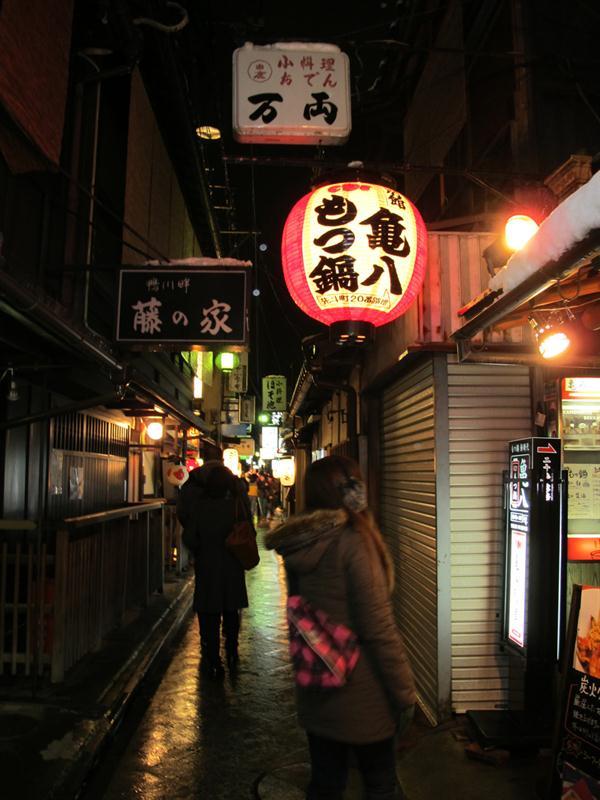 Posted at 00:00h in Blog, Japan by Don and Sharry 0 Comments
New Year in Kyoto

The Temple Bells of Kyoto and the Rabbit in the Moon

A VERY large part of my desire to spend a year in Japan was my wish to experience all four of Japan’s very distinct seasons. At the center of my wishes was my desire to hear the temple bells ring in the New Year in Kyoto. This idea arose from reading the last novel by Nobel Prize winner Yasunari Kawabata, Beauty and Sadness (Utsukushisa To Kanashimi To, published in Tokyo in1961). The opening images are those of, Oki Toshiro, traveling by train to Kyoto to hear the New Year’s Eve bells. Oki remembers listening to the bells on the radio for years: “The deep booming note of a huge Buddhist temple bell resounded at leisurely intervals, and the lingering reverberations held an awareness of the old Japan and of the flow of time. . . . For a long time he had been tempted by the thought of being in Kyoto one New Year’s Eve to hear the living sound of those old temple bells.” I had read Kawabata’s book in the 1980s, but the memory sat in my mind and surfaced to the top when we began to plan to cruise Starr to Japan. I, too, wanted to hear that “living sound”

It wasn’t an easy thing to plan; I began to look for accommodations in Kyoto in April and soon discovered that there were none available. I didn’t know that most Japanese people return to the places they grew up to spend time with their family at New Year. Most Japanese homes are small and the returning family member stay in ryokan and hotels, making reservations for the next year when they check out in January. I was fortunate to find a gentleman who operated a small boutique hotel in Kyoto who helped me find a very nice room at the Kyoto Hotel Okura.

Don and I arrived back in Ashiya on 28 December after spending Thanksgiving and Christmas with our family in Seattle. We had one day on Starr to unpack and to repack for four nights in Kyoto. The next morning we took the 0827 bus to the JR train station, jumped on the 0900 “Super Rapid” train and were in Kyoto by 1000. We left our bags at the hotel and walked to Nishiki Market to see what kinds of special food were on display for this most important holiday of the year in Japan. The market was so jammed with people that I wasn’t able to take any photos; we were all like a single moving organism flowing down the narrow aisle, occasionally able to separate ourselves from the whole to stop at a food stand to admire the beautiful displays.

That night we walked down the narrow lanes of Pontocho, the old geisha district on the Western banks of the Kamogawa River, hurrying to meet with Masahiro Murakami san at his “now closed” Hotel Haut-Village, adjacent to Murakami ju, his family’s 150 year old pickle factory and shop. We were taking Murakami san as our guest for dinner as a “thank you” for his kindness in helping us find our accommodations in Kyoto for New Year. We had asked him to choose one of his favorite restaurants, convenient to his hotel. After making the reservation he responded by email:

“The name of japanese restaurant is Ajihana which is near our hotel by 8 walk minites.

It is small restaurant which has only 10 seats , but the taste of japanese food is high class

and few person knows this restaurant in Kyoto.

for a long time and was independant to the present owner restaurant .

As you know, the taste of kyoto japanese food is most simple and light.

And many vegetable of kyoto brand in the cooking as the material.”

Ajihana is a very small restaurant with a small counter and two tables; the food was outstanding Kyoto cuisine beautifully presented, and it was very affordable.

On the way back to our hotel we passed a restaurant with this beautiful Norin Curtain.

Japan’s years are named after the ancient Chinese Zodiac and we were on the verge of exiting the Year of the Tiger and entering the Year of the Rabbit. The Rabbit is very special in Japan and is associated with “moon viewing”. While we Americans see “the man in the moon”, Japanese see a rabbit pounding mochi. On the Norin Curtain a rabbit family is climbing a ladder to the moon.

In the morning, when we opened the curtains to our window (on the 11th floor) of our hotel, Kyoto was white with snow. We headed out early . . . to Starbuck’s for a triple-shot latte and croissants. First on our agenda for the day: a quick trip to Uniglo for some Heat-tec long underwear; “Oh Baby, it’s cold outside.” Then off we go to explore Kyoto, using my guidebook, “Old Kyoto, a Guide to Traditional Shops, Restaurants and Inns” by Diane Durston. Immediately next door to Starbucks, Funahashi-ya is a shop that has been selling rice crackers, next to the Sanjo Bridge on the West bank of the Kamo River, since 1885 (way before Starbucks). The shop next door, Naito, has been making hand-tied hemp palm shuro-boki and millet-stock kibi-boki brooms and brushes since 1869. We also search out Tachikichi, a shop selling fine kyo-yaki (Kyoto ceramics) since 1752.

It is traditional to eat soba (buckwheat noodles) on New Year’s Eve since thin long noodles symbolize longevity. It is called toshikoshi soba (passing the year noodles). Soba restaurants around the country are busy making soba on New Year’s Eve. People say to each other “yoi otoshiwo” which means “Have a nice year passing” at the end of the year. We sought out one of the oldest and best soba shops in Kyoto to have lunch. Misoka-An Kawamichi ya has a history dating back some three hundred years. Located in a long, narrow traditional Kyoto building, it has three very beautiful (if small) gardens which were dusted with snow. We had a one-pot dish called hokoro which was prepared at our table in a special metal pot.

Don at the entry to Misoka-An

View of the rear garden

Sharry at the gate to the front garden

As the day progressed, it continued to snow lightly. After a sushi dinner at Tai-Sushi (another recommendation of Murakami san), we walked through Yasaka Shrine to hear the temple bell at Chion-in. Before midnight on New Year’s Eve, temple bells across Japan begin to toll slowly 108 times. It’s called joya-no-kane. People welcome the New Year by listening to the sound of temple bells. It is said that the temple bell tolls to purify a person of the 108 Buddhist worldly desires. We were heading for Chion-in because it has the largest temple bell in Japan, and it takes 17 monks to make it ring.

We were directed along with the crowd through Yasaka-jinja (which is considered the guardian shrine of Gion), through Maruyama Park and into the extensive grounds of Chion-in Temple.

The ringing of the bell was scheduled to begin at 10:40pm, and we were early enough to get into the already extensive line forming to climb the stairs up the hill to the bell. The snow was beautiful; the trees looked as if they were blooming with cherry blossoms and the air was cold and crisp. The bell began to ring as we were moving along in the line, which moved forward, and then folded back on itself, and then moved forward once again, as we slowly climbed the wide stone steps up the hillside. The deep, rich sound of the bell enveloped you and was more full than I had imagined. We reached the giant bell with its attending monks, and were able to move along the pathway encircling it during the process of, perhaps, a half-dozen rings, and then we all moved on down the hill to let others take our place alongside the bell.

The line to the Bell

The line to the Bell

Ringing of the Bell

Ringing of the Bell

As we descended the stone pathway surrounded by snow, we could still hear the deep, powerful ring of the bell echoing us on our way into the New Year of the Rabbit.

If you want to hear the sound of the temple bell, go to: http://soundcloud.com/tributes-and-laments/chionin-temple-bell-on-new-years-eve

If you want to see a video of the ringing of the Chion-in bell: http://www.youtube.com/watch?v=XUHTnMX4QFA&feature=related