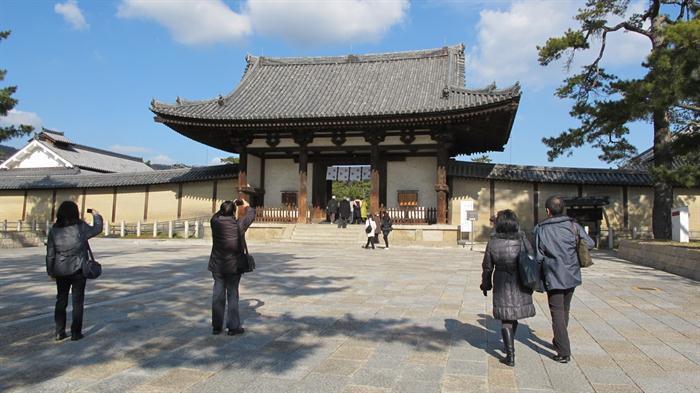 Posted at 00:00h in Blog, Japan by Don and Sharry 2 Comments
Nara: A Trip to Japan’s Ancient Beginnings

Horyuji, the oldest Temple in Japan and Yamayaki

We met an elderly gentleman on the train from Ashiya to Nara; his name was Mitsui Maekawa and he was a 78-year-old retired school principal from Osaka. He was also a volunteer guide at Horyu-ji Temple in Ikaruga, three stops on the train in the direction of Osaka from Nara. He stayed on the train and got off with us in Nara and “guided” us to the Tourist Information Center and to our hotel. We didn’t need his help, but this is the way of the Japanese people; they want to take care of visitors to Japan. Maekawa san told us that we MUST go to Horuji, that it is one of the most important temples in Japan and perhaps the oldest. We offered to send him in a taxi back to the train station, but he would have nothing of it, and walked back (about a 20 minute walk). We parted at the hotel, and told him that we would see him at Horyu-ji the next morning.

We arrived by train around 0930 on a beautiful, if cold, and sunny day. We walked the 20 minutes or so to the temple grounds and Maekawa san was standing right inside the entrance at the Main Gate to this very large temple complex. He walked with us to the Western edge of the complex, and we could tell that he was very frustrated that his English was not good enough to explain to us the details of the temple.

Maekawa san introduced us to another volunteer guide, Tomoaki Ikeda, who was very proficient in English and was an outstanding tour guide. Ikeda san spent three hours with us, teaching us about Horyuji. It was like taking a concentrated university course on early Japanese history and the beginnings of Buddhism.

I’m going to make this entry short; I have probably bored you enough with more information than you ever wanted to know about shrines and temples in Japan. I will simply show some of my photos of this remarkable World Heritage Site (which are limited because visitors are prohibited from taking any photos of most of the incredible Buddhist art objects inside the buildings and in the Treasure Hall.

One more word about Ikeda san. He was very well prepared, with a large binder with pictures depicting the major Buddhist images and a small notebook with “notes” on specifics in English for his own assistance in explaining details in English. I will give you an example of the broad scope of his knowledge and his “teaching aids”:

There is a beautiful portable shrine in the Treasure Hall called the Tamamushi Tabernacle, dating from the Asuka Period (538-645 AD), which was decorated with the iridescent colors of the wings of the Tamamushi Beetle. After describing how the tabernacle was decorated, Ikeda san used his flashlight to highlight a small spot on an upper corner of the shrine that still had a tiny spec of the beautiful iridescent green color; he then whips out of his pocket a preserved tamamushi beetle in a plastic case with its marvelous luminescent many colors of green. This is making history come to life.

There is a photo of the shrine in the links below:

If you want to learn more about Horuji go to the following websites:

The fireworks started at 6:00pm, and were the best we have ever seen, and this includes having seen the fireworks in 1997 in Hong Kong during the “handover” ceremonies. The fireworks images included the face of Fukurokuju, one of the 7 Lucky gods of Japan (god of Wealth, Happiness, Longevity, Virility and Fertility), the head of a Rabbit (for the New year), the head of a Deer (Nara is overrun with deer, one thought to be messengers of the gods), and trees with cherry blossoms.

The “grass-burning” on Mt. Wakakusa began immediately after the fireworks.

As quoted from Tomoko Otake of the Japan Times: “The ritualistic burning of the 342-meter-tall haill dates back to the Edo Period (1603-1867) when people reportedly started torching the grass due to the widely-held belief that ghosts would haunt them if they didn’t.” It worked; we didn’t see a single ghost while we were in Nara.