[MVStarr] We are almost there 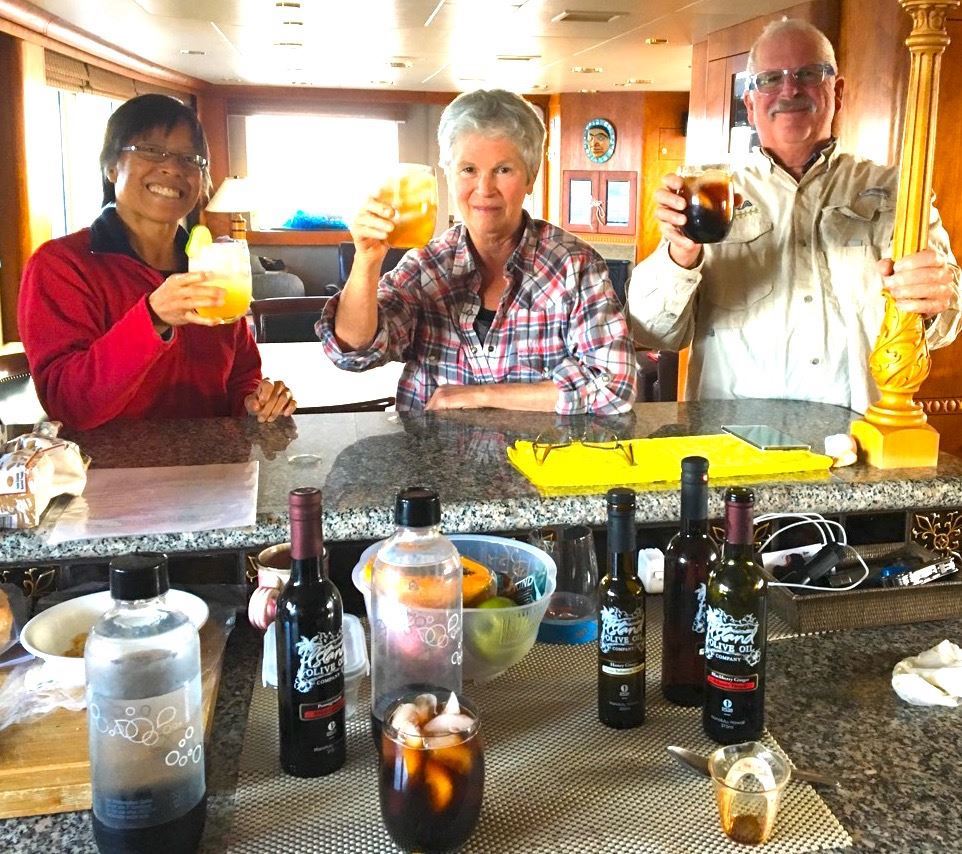 23 Apr [MVStarr] We are almost there

(The first three Blog entries below were written on April 19 when the wind and seas were still strong and rough.)

Sharry is frustrated with banging into 18-25 kn headwinds and seas. I can’t say I blame her. We have had only a few meals that were cooked on the stove. Most of the meals have been grazing on pita bread, microwave Udon soups, nuts, yogurt, dried fruit and stuff like that. It’s a regular health food cruise, thanks to both Sharry’s and Donnas’ provisioning. Joe has been freezer diving looking for morsels of frozen meat. I might add that in spite of the weather, we have had cocktail hour a couple of times. Our hard drinking crew each has their own special concoction. Sharry’s is Pear Ginger balsamic vinegar with soda water…Joe’s is Blackberry Ginger balsamic and soda. Donna prepares crushed candied ginger with honey, and mine is Blackberry balsamic vinegar with soda. These are hardy, hard drinking mates!

Our non-alcoholic cocktails
We have been running the engine at 1600 rpm, which is 100-150 rpm higher than our normal cruising speed. In flat water, 1450-1500 rpm gives us 8kn, and 1600 rpm gives us 9kn. With the head seas and the engine at 1600 rpm, we would punch into a wave and slow down to maybe at the lowest, 5kn, and then slowly grind back up to 6.5-7.5 kn. Yesterday I stepped out onto the aft deck to check the aft running light and got soaked from the bow spray coming all the way to the stern.

The boat is heavily incrusted with salt.

Better seas are coming and hopefully the fish lines will soon go back out.

Only 3 days until Cape Flattery.

Grey, grey, grey . . .
We have been at sea for 9 days now with 5 days of seas so rough that we were unable to cook dinner. Here are some of our Log entries:

“Yah Sure You Betcha-Smoothin’ Right Out (NOT)”

I guess that Joe and I are the only ones writing down our grouchy feelings, but I know that everyone has been thinking the same as us.

I have been wondering why I haven’t been enjoying this passage as much as I usually do. Here are some reasons:

1. We are going the wrong direction and too early in the season. It is much nicer to go from cold to warm and last time we made this trip it was in JULY of 2013; we arrived in the Pacific NW in SUMMER.

We would usually cruise with the Pilot House doors open, or at least partially open. The PH doors have been closed tight for days because of the cold outside air and the seas beating against the sides of the PH doors. It was necessary to turn on the heat inside when the PH temp read 44 degrees at the beginning of our night watch.

4. Starr is a GREAT ocean-going boat, but the wave action is erratic and it has become very difficult to walk about the boat.

It is our rule: “one hand for the boat”. It takes more than one trip to carry a sandwich and a bottle of water from the galley to the PH.

THE GOOD NEWS IS: the weather appears to be settling out. We hope that it will be smooth sailing from here. It’s like giving birth; one forgets about the pain not long after. I will be ready to make another crossing by next Fall when we head back to Hawaii.

A little Happiness along the way: a perfect loaf of bread
Donnas’ Blog: Booby on Board

After two days of fishing, the winds came back up so it was time to stow all the gear. We went outside to the back deck, and there was a brown booby! It saw us and quickly scuttled to the safety of the space under the ladder. I watched it, took a good look and decided it was a juvenile, so cute! From my previous passage-making experience, I assumed the standard ships’ protocol regarding boobies on board was as follows: 1) admire the booby, 2) check on the booby from time to time to see if it is still on the boat. I was quickly corrected in my assumption when Don rounded the corner.

Don: Did you get rid of it?

Don: No! You grab it with your hands!

At that point, Joe took charge and showed me how it was done. He donned a pair of orange rubber gloves that looked to be about two sizes too small but perfectly adequate for a booby extraction. Then he walked over to the booby hiding place and reached under the ladder. There was a mild scuffle and the sound of toenails scraping on the deck presumably the bird’s. Joe lifted the bird up over the railing, said a few words of encouragement, and dropped the booby into the big blue. The booby flew a safe distance from the boat, sat on the water, then turned and watched us as we drove away.

That was a good lesson for me. Next time there is a booby on board, I’ll know just what to do.

Day 10, ahoy from the MV Starr, a little battered but making good progress home. As my mates have relayed we have had a couple of bumpy days, many of you know what I mean, the boat moving in unpredictable ways which require baby steps and having a hold of something secure, occasional moments of weightlessness and bruises showing up in mysterious places. I am careful not to dance across the galley with a cupboard door in my hand that I have inadvertently ripped off its hinges.

Joe’s “owie”
With calmer seas and true wind down to under 10knots I soon forget the past days of bucking straight into the waves and relish the beauty and vastness that is the open ocean. Now that wasn’t so bad after all was it, life is good. I am still bailing my way across the Pacific, emptying the Nalgene bottle we set up to catch water in my stateroom from a hull window with a catheter attached to a fitting screwed into what’s left of the shelf we ripped with the Skill saw and bailing with a sponge. The flatter the seas the less the water comes in.

You sailors out there would be really impressed with Starr’s upwind VMG numbers, this baby will go to weather like no sailboat I have ever been on hour after hour and day after day. The last week or so on a sailboat I would have been thinking “I can’t get there from here”. Although I miss being outside I don’t miss putting on my “foulies” and long underwear to stand my watch and after my watch going below to wash the salt build up off my extremities and out of my eyes.

Starr is steady on toward Cape Flattery and the welcoming light of Tatoosh Island. How soon this marvelous adventure will be over.