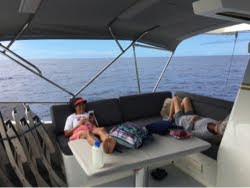 Posted at 13:48h in Blog, Hawaii by Don and Sharry 0 Comments

It was another glorious day yesterday spent piloting Starr from the flying bridge. The wind was still from the NE, directly behind us, basically blowing the same speed we were going so it was like a calm day at the beach. There was a lot of lounging, napping, and reading up there by the off watch crew.

Visibility is much better from Starr’s flying bridge, ten feet higher than the wheelhouse. As a result, we could see a lot more of the rubbish that sits just at or below the sea surface. It was everywhere, and we were never out of sight of small pieces of plastic. We passed a few nets as well. They weren’t huge nets, but might have been large enough to foul Starr’s prop had we hit them head on.

It was stressful looking for nets ahead of the boat, particularly during the late afternoon when the sun ahead of Starr created a glare that prevented the watch stander from seeing submerged items until the boat was nearly on top of them. That tug boat captain we spoke to a few days ago was right about nets after dark. There is no way we’d see them, even with our infrared camera. We are depending on luck to avoid those, and so far luck has been with us.

This morning it is looking like garbage density is less. Perhaps we are through the worst of it? We shall see.

The wind shifted overnight and is now coming from ahead of us. The seven knot breeze combined with our speed through the water makes an apparent wind of fifteen knots over the deck. That might be too windy to enjoy life on the flying bridge today.

I tried to contact Keith on his Cal 20 by text via his Spot Tracker system but never got a response from him. We are now past his probable position so it doesn’t look like we will see him out here.

We did pass a 750 foot cargo ship yesterday headed from somewhere in Asia to Peru. She looked like an empty grain carrier heading for South America to pick up a load to take back to Asia. Do the Chinese eat quinoa?