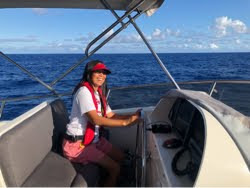 Posted at 13:46h in Blog, Hawaii by Don and Sharry 0 Comments

Yesterday it felt like we were in the tropics. The wind was from the Northeast, directly behind us, and blowing at the same speed Starr was powering, about nine knots. That made the apparent wind close to calm, and it was glorious on deck.

Don dug out the flying bridge cushions from the lockers, and all of the crew spent time up there during the day. Sharry read her book for a few hours in the shade of the bimini and Donna spent her entire three hour afternoon watch scanning for nets from the upper level control station. It was easier to spot rubbish from that higher elevation, and debris density increased to the point that there was always some pieces of plastic in sight. Interestingly, it was almost all smaller than a dinner plate in size. We continued to see the occasional plastic fishing float, but haven’t seen any other large pieces of garbage, We’ve only seen two nets so far.

I sighted my first malolo, or flying fish, during my afternoon watch. Yep, you’re in the tropics when the malolo are around.

The barometer is telling us that the high, or one of them, is behind us. After steadily climbing for a few days, it started dropping a day ago. Barometric pressure is down from a high of 1024 to 1015mb. Usually a significant amount of wind accompanies a pressure gradient that steep, but we haven’t seen it.

We reached the halfway point of the passage yesterday afternoon. The forecast shows that the high is starting to get better organized behind us, and the North Pacific is moving back into a more typical summer weather pattern. Fortunately for Starr, the trades won’t return to normal until we are just two days out of Hanalei. Until then we should be enjoying flat water and light winds.

Last night we could see squalls filling in all around us on the radar, and dawn revealed what will likely be a wetter day than yesterday. Starr can use the rinse.

Our new watch system has a problem we need to sort out. We have been allowing the nighttime standby watch stander to nap in the wheel house day bunk. The current watch stander rotates into the standby position at the 10PM, 1AM, and 4AM change of watch. We don’t want to rouse the soundly sleeping former standby person, (“Wake up, it’s time to go to sleep”), but there is no place for the new standby watch stander to nap unless we do. If we don’t deal with this quickly, Don may come up to the wheelhouse for his 7AM watch to find Donna at the wheel and Clay, Sharry, and I spooning in the day bunk!