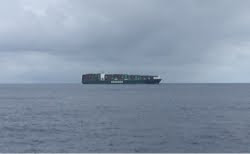 Posted at 13:44h in Blog, Hawaii by Don and Sharry 1 Comment

Shortly after posting yesterday’s blog we got a radar contact. The “Ever Lyric”, an 1,100 foot container ship heading from Taiwan to Los Angeles at 21 knots, was on a near collision course with the mighty Starr. Don called them on the radio, “Do you see us?”, he asked.

“Yes, we see you,” the female on the other end of the radio call answered in Chinese accented English.

“Would you mind altering course a bit to pass green to green?”, requested Don.

“OK. Green to green,” she replied.

We watched nervously as the behemoth bore down on us, slowly altering course to port. She passed us about a mile away.

We saw a few other large ships during the day and evening at a greater distance from us on similar or reciprocal courses heading to and from Asia.

Speaking of other vessels in the area, Kaneohe Yacht Club member Keith Letzky, who is out cruising around the North Pacific on his Cal 20, is about a day ahead of us on this heading. That was not a typo. He is indeed out here on a Cal 20. We will be keeping track of his position as we get closer. It would be fun to run into him (figuratively, of course) out here. “Pardon me, Do you have any Grey Poupon?”

The volume of floating rubbish sighted increased significantly yesterday. We probably saw a couple of dozen bits of junk before it got dark last night. Most prevalent were black plastic fishing floats, chunks of styrofoam, and plastic bottles. No more nets, and no glass balls.

We are keeping a close watch ahead of us for nets that might foul Starr’s propeller. We have confidence that we can see and take evasive action in time during the day, but not so at night. Don decided that we should have two watch standers during the hours of darkness so there is always someone standing next to the engine controls just in case we do suck a net into the prop. Quick action to put the engine in neutral should save the transmission, prop, and shaft and make it easier to get rid of the net. Our new watch system has each of us on for a six hour watch at night and a three hour watch during the day. While on watch in the dark we are staring at the TV screen for the infrared camera pointed at the water in front of Starr’s bow. It’s not very exciting, akin to studying a television test pattern for hours on end. Nobody saw anything of note last night. We also didn’t suck a net, so Life is Goo aboard the mighty Starr.