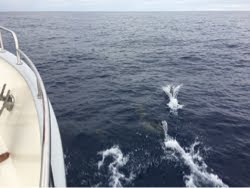 Posted at 13:41h in Blog, Hawaii by Don and Sharry 0 Comments

We are definitely in The High now. The barometer has steadily climbing up from 1014mb a few days ago to 1023mb today. Water temperature is up to 76 degrees, seas are almost Kaneohe Bay smooth, and last night the skies were perfectly clear. The Milky Way was directly overhead during my midnight to 3AM watch pointing the way to Kauai.

After seeing no garbage all day long, we saw a plastic buoy and a few minutes later some styrofoam just before sunset yesterday. A ship passed behind us on the radar screen during Donna’s night watch, our first since leaving the coast four days ago.

Don and I were chatting just after the end of my night watch when a ship appeared on the radar ahead of us heading in the opposite direction. As we converged its details appeared on the AIS. It was a 250 foot tug powering at thirteen knots, too fast to be towing anything. Curiosity and boredom took over. We called him on the radio to find out what he was doing out here.

The watch stander aboard replied that he was working in The Garbage Patch, and was on his way home. He didn’t tell us what he’d been doing, but said we could find out more at “Ocean Cleanup”. Perhaps he was pulling that long boom thing we have been reading about?

We asked him where the largest concentration of garbage was located. “Southwest of our current position,” he replied. Let’s see we are heading….. Southwest. Ok, then.

We got into a long discussion with him about seeing and avoiding garbage, particularly fishing nets that can foul our propeller. “You might see them in time during the day, but there is no way to avoid them at night,” he stated confidently. Don has some experience with nets and propellers. On the 2016 crossing from Hawaii to Seattle, Starr twice got nets tangled in her prop at night. Fortunately, Don was able to get the nets off without damage to the propulsion system with only a couple of hours delay.

This morning we are passing a piece of floating garbage every few minutes. Styrofoam, black plastic fishing floats, a mess of cork floats probably with a submerged net below them… No glass balls yet. We have modified the watch system going forward so there will always be two people on watch during the hours of darkness. Hopefully if we keep a constant eye on our forward looking infrared camera, we can keep nets out of the propeller at night.

A huge pod of perhaps fifty spinner dolphin stopped by for a visit at 9AM this morning. We never get tired of watching these beautiful animals frolic in Starr’s bow wave.

As I was getting ready to post the blog, Don spotted a net floating ahead of us. “Quick, get the fish line out!”, he yelled. I rushed to Starr’s stern and got our already rigged lure in the water. I was letting the line out as a mahi hit the lure next to the net.

“Fish on!”, I yelled, and Don stopped Starr. As I reeled the fish in I could see dozens of mahi following their hooked companion toward Starr’s swim step. Somehow the brand new hook broke off of the lure just as the fish was getting close, and the whole school disappeared. No problem. We rigged a new lure, circled around to the net again, and hooked another one. This time we landed a nice ten pound female. Fish for dinner!