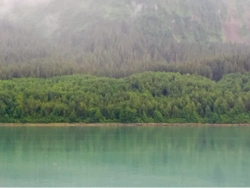 Posted at 14:42h in Alaska, Blog by Don and Sharry 0 Comments
Lituya Bay is a six mile long by mile and a half wide body of water that runs between the steep glacier covered mountains on the northeastern end of the bay and the ocean to the southwest. The entrance to the bay is a narrow channel only thirty five feet deep in the middle that quickly shoals on either side. With a twelve foot tidal swing, there is a lot of water that moves into and out of the bay twice a day through the small entrance. The coast pilot said that the prudent mariner only transits the entrance at slack water, and we are prudent mariners, or at least we sometimes try to be. Starr arrived off of the entrance to Lituya Bay on schedule just before slack low water and our passage through the channel and into the bay was uneventful.

The first thing you notice after entering are the two toned evergreen trees surrounding the bay. Between the water’s edge and an elevation of about 100 feet the trees are all a lime green color. At higher elevations they are all darker green. The line of demarcation between the two groups is distinct and obvious. We had already done our research and knew that the lime colored trees were all new growth since the lower elevations were scoured by the1958 tsunami.

As we approached the head of the bay the line of demarcation started climbing the slopes and topped off at over 1,700 feet opposite the landslide area that caused the tsunami. It was surreal to look up and see how high the water had climbed.

The second awe inspiring feature we noticed was the change in topography since the landslide. The chart, which was drawn in great detail prior to 1958, shows a “T” shaped bay with two half mile long by 300 foot deep inlets at the northeastern end of the bay beneath the glaciers. The inlets are gone now, completely filled with rubble to well above sea level. The amount of material that had to be moved to make this change was almost unbelievable.

With a new found respect for Mother Nature, we turned back towards the entrance and anchored for the night off of an island in the middle of the bay.

We wanted to get an early start this morning so got underway just after 4AM. This wasn’t slack water though, and as we approached the bay’s entrance we could see through our binoculars that ignoring the Coast Pilot’s advice was not going to be a good idea. Waves were breaking across the entrance and there was a large standing wave where the water rushed out at the throat of the channel. We reanchored, went back to sleep, and tried again at 8AM at the change of tide. Sorry, no harrowing tales to tell once again.

As I write this we are running along the coast watching the scenery slip past. La Perouse Glacier is coming up beside us. This afternoon we will be entering the fjords of SE Alaska, practically home turf for Don and Sharry. Don grew up aboard a boat in these waters and they have been cruising here together since the mid ‘80s.