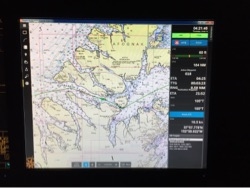 Lori emailed and asked me to include info on Starr’s position and daily run when I blog. I keep forgetting to provide that information, but if you want to know where we are at any time, just click on http://forecast.predictwind.com/tracking/display/Starr. This is a case sensitive link. We are a power boat that goes eight knots in almost all conditions. Starr will do 192 miles per day, perhaps a few more or less depending on wind, wave, and tide. Daily milage isn’t as variable or noteworthy as it is on a sailboat.

Kodiak is an eighty mile long by forty five mile wide island lying twenty miles southeast of the Alaskan peninsula. Shelikof Strait runs between the two. We had planned to hug the peninsula side of the straight as we headed for Geographic Bay on the peninsula, but now we are focused on the fastest course to Seward.

The current tables showed that we could get a tidal assist if we cut between Kodiak and Alognak Island to the north based on our expected arrival time there. That route would also would put the wind and seas further behind us for the crossing of the entrance to Cook Inlet, and probably cut an hour off of the trip. We’d also get to check out the scenery on Kodiak Island which we wouldn’t see if we stayed on the peninsula side of Shelikof Strait.

Decision made, we altered course to leave the Alaskan peninsula behind at 2PM, and four hours later Kodiak Island appeared ahead out of the mist. We powered northeast up the coast of the island enjoying a nice one knot push from the current and wind from behind us. Small dolphin played in our bow wave for a while after dinner. At 11PM we passed an Alaskan ferry doing eighteen knots in the other direction. Perhaps they were heading for Dutch Harbor?

We were a bit concerned about weaving our way through the narrow passage between the islands in the middle of the night, but the sky was clear and cloudless. We had twilight all night long and when we entered the narrowest and busiest part of the channel at 3AM the sky was already starting to get brighter with dawn approaching.

As we approached the throat of the channel at 5AM all three of us were up in the wheelhouse to enjoy the fun. As the gap narrowed next to Whale Island, Starr’s speed over the bottom increased and it topped out at 16.3 knots just before we were spit out the other end into Marmot Bay. 8.3 knots of current; what a ride!