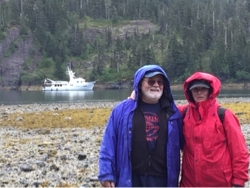 Posted at 14:24h in Alaska, Blog by Don and Sharry 0 Comments
One of our consultants told us about the great glacier viewing in Icy Bay, so we headed in that direction after a pleasant morning in Otter Cove. It was like entering a different world as Starr approached the entrance to the bay. All of a sudden the water was full of small ice bergs, which we hadn’t seen before. We were trying to get close to Chegena Glacier, but the bergy bits got so dense as we crept into the bay that we barely got a glimpse of it before the ice completely blocked our path and forced us to turn around. We didn’t want to touch ice and risk damaging Starr’s paint or appendages.

We backtracked a bit and dropped the hook in Humpback Cove at the end of Whale Bay. The cruising guide said the hiking there was good, so we went ashore to give it a go. It was a very gradual drop off and we couldn’t get the dingy right up next to dry land. I was the only one in the dinghy with rubber boots, so I got to piggy back the rest of the Starr crew ashore to keep their feet dry. Fortunately there wasn’t anybody with a camera ready to record the comedy.

We marched around the bay for about an hour looking for some kind of a trail but never found one. We did find a lot of bear scat though, some bones from fish bear had eaten, and a number of large bear paw prints. We had our bear spray with us, kept together, and made lots of noise to minimize the likelihood of an encounter. Didn’t see any bear, but we did see eagles and found some harbor seals basking on the rocks. In all our stomping around the bogs our feet got soaked so the earlier heroic effort to stay dry was all for naught.

There was plenty of daylight left and team Starr still had energy in reserve so we moved deeper in Prince William Sound to Barnes Cove, about fifteen miles away on Knight Island. This looked like it would be a good spot if the winds got up near twenty knots from the southwest overnight as forecast.

Barnes Cove is a completely landlocked hole at the inner end of a fjord that penetrates to the middle of the seven mile wide island. It is spectacularly beautiful and completely protected. There are 2,000 foot snow capped peaks to the east, south and west. The cove opens to the east-west running fjord on the north, but the dog leg entrance channel rocks block any waves that might make it in this far. It may be blowing twenty out in the sound this morning, but we can’t tell in here where it is glassy calm.