Indecision is the Key to Flexibility 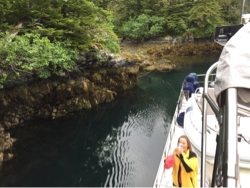 24 Jun Indecision is the Key to Flexibility

Posted at 15:19h in Alaska, Blog by Don and Sharry 1 Comment
Starr’s course wavered as she headed north, but we finally decided on Disk Island off of the mainland. On the way there we set our shrimp pots in 350 feet of water hoping for better luck than our first drop. We saw a small boat sitting stationary nearby and headed over to speak with them. They had just landed a thirty five pound halibut and gave us some tips on where to find more. We tried following their advice but only caught a number of rockfish, which we threw back. Discouraged by our lack of luck fishing, we headed into the anchorage at Disk Island for the night.

The entrance channel into the Disk Island lagoon was even narrower than the one into 29 Fathom Cove. With nerves of steel, Don maneuvered us in using bow and stern thrusters to keep Starr off of the stones. Our fiberglass fishing poles, angled off of the stern, acted like those flexible metal fender feelers you used to see on cars back in the ‘60s. The poles never touched the vertical rocky sides of the channel, but they came close. Once inside, we found a calm protected anchorage for the night.

This morning we picked up our pots and found another meal’s worth of shrimp. Not bad, but nobody would call us great shrimpers.

The title of today’s blog is one of Clay’s favorite sayings, and it seems appropriate here. The ability to change the itinerary at a whim is one of the advantages of voyaging by boat. This morning team Starr discussed the course ahead. Lori and I had planned to depart for home in a few days from Wittier, a small port on the western side of Prince William Sound. That would give Don and Sharry some time alone to enjoy the area. However, while the wind Gods have been kind to us, the cloud and temperature deities have not been as friendly. It has been dreary, completely overcast, and cold for nearly the entire time we’ve been here in Alaska. There also has been a surprising lack of animal life here in Prince William Sound. We’ve seen lots of sea otters and the occasional whale and seal, but have yet to see any four legged critters ashore. The scenery has been spectacular, but we aren’t seeing much that is new and different from the day before. As a result, Don and Sharry have decided to take Starr to Southeast Alaska ahead of schedule and have invited Lori and me to stay aboard until the boat reaches Sitka. We are looking at our calendars to see if we can make it work.