In the Great Pacific Ocean 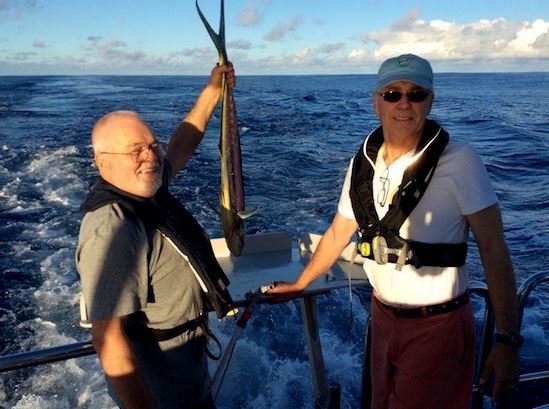 06 Nov In the Great Pacific Ocean

Posted at 09:14h in Blog, Seattle by Don and Sharry 5 Comments
Fish On, Sneaking Out the Window and Reefer Madness

As the sea temperature has risen above 70 degrees, the sea hunters have stirred to battle. It is an unfair fight with Don and Brownie marshaling their considerable collective fisherman experience in the quest for dorado and tuna. In terms of armament, few vessels are as well equipped as Starr. Proper poles and lures, an electronic alarm in the wheelhouse to signal “fish on”, a perfect broad swim step complete with high staples to keep us aboard and a custom table extending over the sea to filet the catch. Just as Sharry began to prepare meatloaf for dinner the alarm sounded. Don and Brownie entered the fray; Sharry put the meatloaf away and took the helm. Brownie reeled in a beautiful mahi mahi, flashing green and yellow with the feather well set. Don manned the gaff and aboard the fish came, still gamely fighting, but doomed. Brownie poured vodka down its throat, the final sedative. I was a bit envious! As it died it’s brilliant color faded. Filets were carefully carved away by Don taking all that was given and with capers and olive oil he and Brownie prepared the spoils of war. It is an age-old story of hunter and prey. Everyone has to eat.

Sneaking Out the Window for a Visit to Paradise

After anchoring in Neah Bay overnight on October 27th with an eye out for a weather window, we were able to sneak down the coast from Tatoosh to Mendicino inside a series of low pressure systems that were marching north one after another.

Travelling inside the first system, we got as far as Coos Bay arriving on Sunday, October 30th at 0200. As we came in, the chart plotter overthought the approach and suggested we were on the beach before full algorithmic reflection. Don wisely ignored it in favor of the nautical wisdom that what you can actually see trumps (lower case “t”), especially when the faithful radar agrees. (No judgment implied on the radar sensitivities of capital “T” Trump). See Duke on “No News is Good News” (except for weather data, of course).

Departing Coos Bay
We initially thought we would have a further window from Coos Bay beginning on Tuesday morning, November 1st,, an appealing daylight departure time. As we were planning for this, a complication developed when our sub-zero refrigerator/freezer quit working for no apparent reason on Wednesday afternoon. (See Duke again on “Reefer Madness”). Thinking we would need to stop in San Francisco for parts and knowing we would need to be right on the shore until we were at least past Cape Mendicino, we plotted an elaborate rock by rock, hour by hour course with 60 waypoints just off the beach between Coos Bay and San Francisco, 48 hours to the south. Every source pointed to hugging the beach: Predict Wind, our weather consultants, and Don’s interviews of tug boat routers and commercial fishermen.

Our course with waypoints
As we were getting ready to go ashore for a comfortable dinner in Coos Bay where the calamari was advertised as excellent, we brought down the Predict Wind weather one more time just to be sure. This is when we decided, oops, no calamari. The Window is closing faster than we thought. Time to go. And we did.

Then things began looking up. The refrigerator started working, again for no apparent reason. Despite the Coast Guard warning us to wear life jackets crossing the Coos Bay bar, it was relatively smooth. After Sharry brought us around a rough Cape Blanco on her watch, things smoothed out more. We decided not to stop in San Francisco. We snuck down the coast rock by rock. Nodding to us affirmatively, Cape Mendicino was momentarily calm. And we were “Out the Window” bound for Hawaii at 1800 on November 1st. Hours later the next low pressure system brought strong southerly winds to the path we had just taken, we could see the window closing behind us, not only from Predict Wind, but from the dark clouds and the squalls on the northern horizon prominent on our longer range radar.

The weather window is closing down on us
On her last trip to a tropical Paradise Lee would have been particularly gratified by the trip close down the beach. For all our years of cruising, she always preferred the beach and I always liked sea room. We debated this endlessly and when the two of us were watch on and watch off, we generally zig zagged along the shore with Lee tacking in on her watch and me tacking out on mine. Appropriately, on her last trip, she totally got her way! We had a glimpse of nearly every rock on the beach and snuck out the window together bound for her tropical paradise.

All in the maritime firmament, when things are looking up, inevitably a cloud appears. The sea is not a welcoming host to things electrical or electronic, yet our vessels are full of circuits, semiconductors, control modules and maybe even diodes. They are all gamely battling the salt air, even the rarified salt air aboard a yacht as well-kept and perfectly maintained as Starr. As we set our plan to depart Coos Bay yesterday afternoon, Don opened the double-wide Sub Zero reefer, chocked to the gills with fresh provisions, and the light didn’t come on. In fact, nothing was working. Kaput!

Visions of food being tossed overboard, 10-12 days of only cookies, cereal and canned soup. spanakopita, meatloaf, baclava, fresh veggies to be fed to the flock of gulls following us as if we were a fish boat. Don began to dismantle the ceiling and access ports. The calls went out to Sub-Zero dealers, radiating further and further away as local sources for a control box were exhausted. Finally, with part numbers in hand and the Sub Zero National Service Desk fully engaged, we ordered the parts and arranged delivery to the St. Francis Yacht Club on the Marina in San Francisco. We would pack in some ice and some new chests and stop in SF. Then Don, in an act of optimism, pushed the “on” button and the sleeping reefer sprung back to life! It ran. Maybe it would keep going. So, we promised to respect the reefer’s sensitivities and slithered out past the Coos Bay Bar on the ebb and set out South. With expert routing by Brownie, we rounded Cape Mendocino and set a course nearly due South. San Francisco and our parts there will have to wait. If we can tomorrow, we will make our slow turn to the west.

Gotta have somethin’ if you want eat at sea

I can’t be your galley hero

If my Sub Zero won’t chill you see

Can’t cook and I am not foolin’

Without some coolin’ down to 38 degrees

Cause all our grub will be spoilin’, I can’t be toilin’

With a reefer that is dead you see

We need a brand new controller

Not a new boiler, but it’s not free

Spread full, I know you will agree

Gotta have somethin’ if you want to eat at sea

I can’t be your galley hero

If my Sub Zero won’t chill you see.