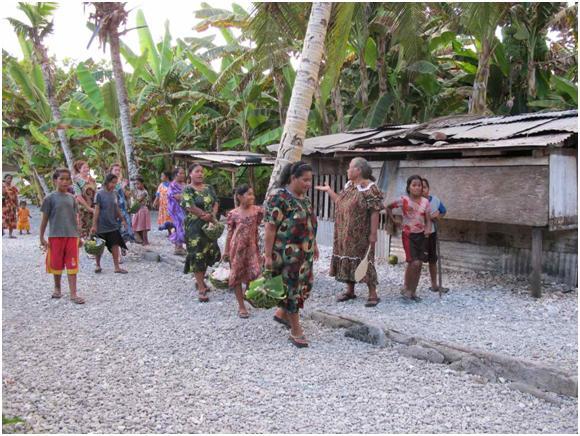 We went ashore at 6pm and were met by the wife of the minister of the Protestant Church, the first church built by missionaries in the Marshall Islands (1857). We unloaded some gifts that we had brought for the village and put it all into a wheelbarrow, which the Minister’s wife pushed to the communal gathering area behind the church, and we followed. We were seated in two white plastic chairs and visited with them for a while, wondering what was going to happen next. So far the four of us were the only people there and our chairs were the only chairs in sight.

Before long the women began to gather closer to the beach, next to the church and after about 20 women and children had arrived, they began to approach us as if in a processional, singing songs and carrying woven baskets.

We were told to please stay seated. Once they were all gathered in front of us, Roseanne came up to us (we felt like royalty, seated in our white plastic thrones) and formally welcomed us to their village, telling us how happy they were that we chose their island to visit. The women and children then all filed past us, shook our hand, told us welcome to their island, and put a lei of coconut candy around our necks (we learned that their island is called “Candy Island”, other islands make handcrafts, but their island is famous for its candy). Every woman and some of the children gave us a freshly woven pandanus basket, full of food: papaya, coconut oil and beverage made from the resin of the coconut tree, coconuts (all husked), two huge stalks of bananas, banana bread, cooked reef fish and more candy and shook our hand.

After the personal greeting everyone stood in front of us and together they sang another song for us, something like a chant with words of mixed Marshallese and English. Annie, the World Teach Field Rep, translated after they finished singing, The song told about how their island was small but it had experienced many storms and was still there, that it is a safe place to live, ending by saying that Imrodji is their “home sweet home”. After their song, they all sat down on the ground in front of us.

We asked Annie: “When do we give our gifts?” She told us that we could present our gifts after the last song. Don presented fishing poles, reels, hooks and line; a 20# bag of rice; and my gift of hairclips for the women who all have beautiful long, thick hair. Then they asked us to sing a song for them; that the tradition is that they sing for us and we then should sing for them. Instead, Don told them stories about growing up on a boat that went to the Native villages of the Pacific NW and how similar their life on Imrodji seemed to him. We both told them how happy we were to be with them on their beautiful island.

We were overwhelmed. We had no idea what it meant to be welcomed to their island. It was becoming dark, but the near-full moon gave us light to return to the beach. The women walked us to the beach and the children waded out into the water to help load the baskets of gifts into our dingy. It was a magical evening.