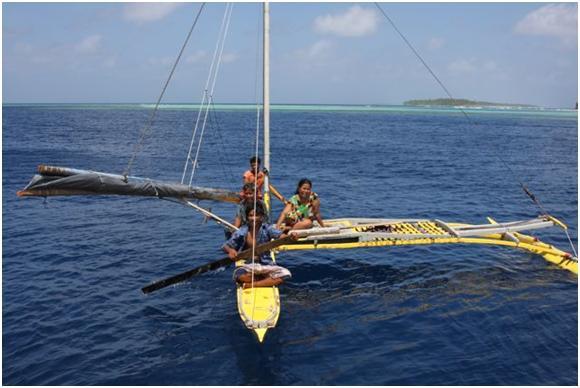 Posted at 00:00h in Blog, Marshall Islands by Don and Sharry 0 Comments
6-degrees4N/169degrees36E

Roseanne (who spoke very good English), Sarah, an older woman (who didn’t speak) and two young boys just came out to Starr, at anchor off Imrodji Village on the North end of the Jaliut lagoon, to invite us to come ashore at 1800 (6pm) to be welcomed to the village. We arrived yesterday afternoon at 1500 after a slow and cautious trip from the SE Passage at Jabor, the largest village in Jaliut Atoll to the N. Passage and the tiny island just inside (about 3600 ft. long and 600 ft. wide) with a population of 120 people. It has taken us several weeks, but we have finally arrived at Paradise.

We went ashore shortly after anchoring about 300’ off the beach, snuggling inside a small reef off our bow, and another larger reef off our stern. The wind is almost always at this time of year from the NE, and has been howling at 20+ knts everywhere we have been in the Mashall Islands so far. It was delightful to find that this was a quiet, peaceful, protected anchorage. We were greeted on shore by Rose, the World Teach volunteer living here and Annie, the World Teach Field Rep who just arrived by sailing canoe from another even smaller village in the lagoon. A village boy was playing the ukelele and a group of children were singing for us. Rose was just about to take Annie on a tour of the island, so we tagged along.

There are no cars here; in fact, there are no roads, only footpaths. There is no electricity. Some of the villagers have solar panels, and those who don’t bring their car batteries to these houses to charge them for a little light after dark. The village goes to bed shortly after sundown and gets up with the roosters at dawn. There are two footpaths on the island, one on the leeward (lagoon) side of the island and one on the windward (ocean) side. We started south, down the lagoon side, but had to cross over to the ocean side before we reached the southern end. Rose told us that we had to cross over because if we didn’t, the women who lived in the last house would cast a spell of Black Magic. Rose said that they would cast a curse at our legs and that we would fall down and die. She said that she wasn’t sure if people really believed this, but that everyone crossed over and maybe the people who lived there just wanted their privacy.

We walked past “the swamp”, three small “lakes” in the “jungle” part of the island (salt water ponds that form at high tide and empty at low). Children love this area because as the tide is emptying out, they jump from one mud clump to the other. It sounds like a version of “King of the Hill”, but the whole island is maybe 6’ above sea level and mud clumps have to do. We were already at the South end, so we then turned around to walk to the North end of the island.

Walking north we continued past the Elementary School, where Rose teaches English and looked at her classroom; a big room with four little 2-person size desks. Next to the school is the village gathering place, a large common area for “parties” (communal dining), which also happened to be behind the church. Rose lives at the North end of the island with a local family. World Teach volunteers live with a family that literally becomes their Mother, Father and Brothers and Sisters. Rose has her own, very simple little hut. There is an outside cooking building and another house for her Mother and Father and her siblings. This is very simple living: there is no running water and no toilet facilities that we saw. I later learned that Rose has her own outhouse left over from the Peace Corp and the only one on the island. The rest of the villagers go to the ocean side of the island, where the breaking surf keeps their toilet facilities clean.

This is a matrilineal society and the whole extended family lives on the family plot of land that has been passed down from Mother to Daughter for generations. Land is very precious and no one ever sells the land. The plots reach from the lagoon side to the ocean side, part is for living and part is for making working (making copra). Food consists of rice (always) with a little fish, or for special occasions, chicken or pig. The chickens and pigs that run free seem to be to be communal unless they are penned up, eggs are available if one hunts for them (but it is better to let the eggs grow up to become chickens). This diet is augmented by papaya, pandanus, and, of coarse, all things coconut (juice, meat and oil).

We returned to Starr thinking that we had come upon a place where life had not changed for centuries.