I’d Rather Be Lucky Than Good 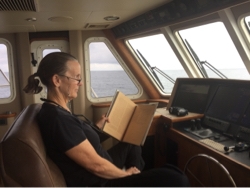 27 Jun I’d Rather Be Lucky Than Good

Posted at 13:41h in Alaska, Blog by Don and Sharry 0 Comments
Lady Luck has decided to stay aboard Starr as a member of the crew so far on this passage across the Gulf of Alaska. She has given us more than a day of glassy ocean out here as we head for Lituya Bay. Lori Lloyd, who is quite susceptible to sea sickness, is our canary in the coal mine and so far she is having a great time.

Good luck is important out here. I got an email from Clay yesterday with details on the loss of the sloop Kalaerin off of Seattle ten days ago. Kalaerin belonged to friends of Clay, competent sailors on a seaworthy vessel that were unlucky enough to be in the wrong place at the wrong time. It is a riveting story, and you can find all the details in Don’s blog at Mvstarr.com.

Don and Sharry are taking one watch and Lori and I the other. Since there are two of us on watch together, we’re sitting longer four hour watches now which gives those with time off a little longer sleep period. The watches go faster when there is someone to share them with and they are more fun. Last night Don and Sharry spent their watches listening to classical music. Lori and I listened to podcasts.

The sky cleared for a few hours last night and Team Starr enjoyed the full moon at the 11PM watch change. We hadn’t seen the moon since leaving Hawaii a month ago.

Vigilance on watch is important out here as we’ve seen a number of large logs. We haven’t had to alter course to avoid hitting any yet on this passage, but Starr has had a couple of close calls. Many of them are large enough to bend a prop or damage the hull. Fortunately, the twilight is still lasting all night so we are able to see what’s ahead of us twenty four hours a day.

Vessel traffic has disappeared since Starr left Kayak Island behind at 4PM yesterday afternoon and turned in toward the coast. The shipping lanes to Seattle and points south are now further offshore so we are all alone out here. Our only company is the occasional puffin, gull or albatross.

Starr remains on schedule for a slack tide 8PM arrival outside Lituya Bay this evening.