Hiroshima and Miyajima Revisited (with Family) 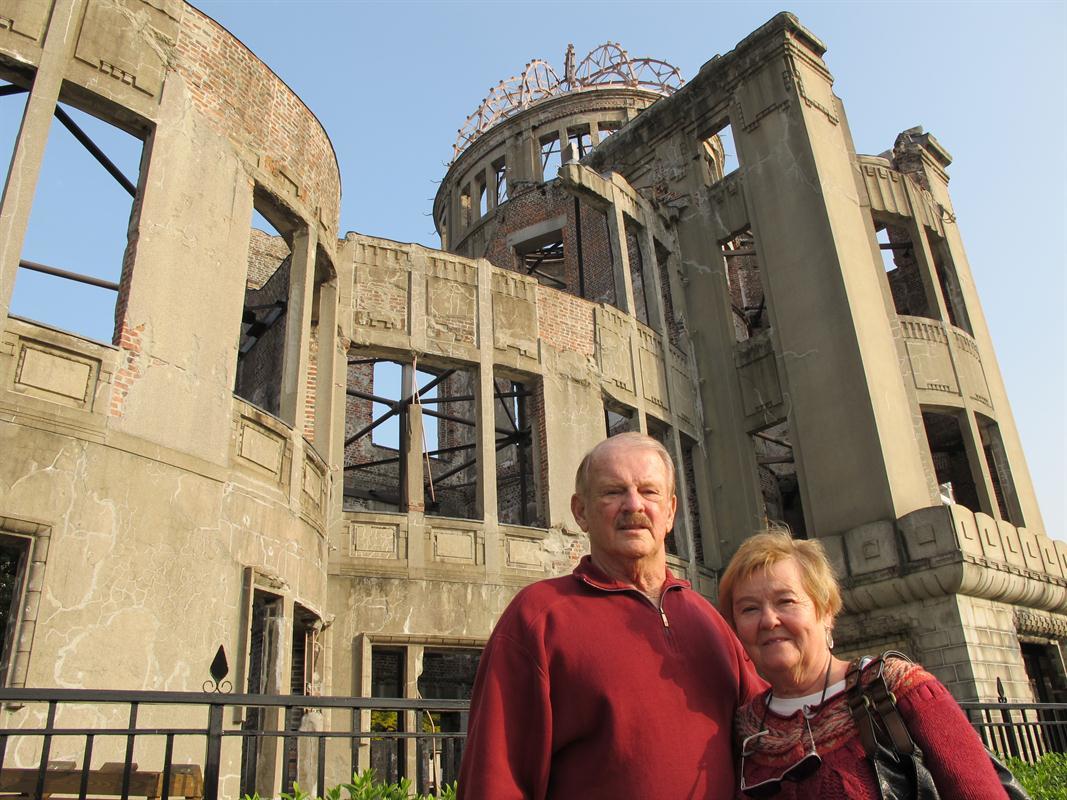 Posted at 00:00h in Blog, Japan by Don and Sharry 0 Comments
Hiroshima Revisited (with Family)

Who would have thought that you could have so much fun with family?

Don’s oldest sister Donna, her husband Wayne, Don’s youngest brother Dan, and his wife Cheryl arrived in Ashiya on Friday, 12 November. The next day we took the train into Kobe and visited the Earthquake Memorial Museum.

On January 17, 1995 at 5:46 am, the city of Kobe was hit by the Great Hanshin Awaji Earthquake, resulting in the death of more than 5000 people and the destruction of tens of thousands of homes. This was Don’s and my second visit to this museum and it is a very scary “wake up call” regarding the potential of a major earthquake happening in Seattle.

This short trip into Kobe was also a “practice” experience for our family, as we were taking the train to Hiroshima the next day.

A Japanese story: On the train ride back to Ashiya from Kobe we changed from the slow, “Local” train to a “Super Rapid”. In the process, Dan left his very nice Nikon camera on the seat of the train. He quickly discovered his loss, and when we reached Ashiya we waited for that “Local” which arrived at the station shortly after and jumped aboard, found the car we had been in, but sadly there was NO CAMERA. We immediately got back on a train returning to Ashiya and upon arrival attempted to talk to the station attendant on duty at the exit gate. He didn’t understand our problem, and stepped out of his booth, stopped a teenage schoolgirl and asked for her help. School kids usually speak pretty good English. Once he understood our problem he motioned for us to wait and got on the telephone. A few minutes later we were able to understand, mostly through gestures and a few words that no camera had been turned in but he gave us a phone number in Osaka and told us to call after 1000 the next morning. As we were heading off to Hiroshima the next day, we asked our Japanese-speaking friend, Paul Faust, to call for us and then to let us know what he learned. The next day, shortly after 1000 Paul called to tell us that someone had turned in Dan’s camera and that the train people in Osaka (about 20 miles away) were putting it on a train and sending it back to the Ashiya Station for Paul to pick up. This is the TYPICAL behavior of Japanese people, not the exceptional behavior. (Don and I have had a sales clerk run out of a big electrical store in Osaka, and chase us down the block because we left our credit card on the counter.)

This story could ONLY HAPPEN IN JAPAN.

At the top of Wayne’s “wish list” for his stay in Japan was to go Hiroshima. Wayne’s father was a Chaplin in WWII and when he and Donna visited us in Honolulu the previous year we had all gone to Pearl Harbor together. Now he wanted to learn about America dropping the Atom Bomb on Hiroshima.

At 0900 on Sunday morning we caught the bus (a 5 minute walk from Starr) to the train station in Ashiya (a 10 minute bus ride) and the train to Osaka Umeda station (15 minutes) and taxi to Shin-Osaka station (5 minutes) where we boarded the Shinkansen (fast train) to Hiroshima. We arrived in Hiroshima by 1200. The transportation system in Japan is AWESOME!! By 1230 we were checked into the Mitsui Garden Hotel, about two blocks from the Hiroshima Peace Park. We dropped off our one carry-on size bag each and walked to the park. It was a beautiful, sunny and warm day and we had lunch near the park and then walked about in the park absorbing the “idea” of Atom Bomb.

Donna and Wayne in front of the A-dome

Memorial for the victims of the bombing

Memorial for the children

The next day Donna, Wayne, Dan and Cheryl went to the Peace Memorial Museum, Don went with Keiji Wakisaka to check out a shipyard that he was considering to haul-out and paint Starr’s bottom; I wandered about town, just exploring. Upon Don’s return, we went to lunch at a very small restaurant that had been recommended for oysters, for which Hiroshima is famous.

Enough of disasters, natural in Kobe and created by man in Hiroshima; now, we moved on to Miyajima and an experience of “old Japan”.

Miyajima is considered one of Japan’s three most scenic places. http://www.japan-guide.com/e/e2250.html

Don and I had visited Miyajima on my birthday, May 10, and had stayed in the historic Iwaso Ryokan. When we hiked up Mt. Misen in the pouring down rain, I really wanted to return in the fall, see “Maple Valley” with its red and yellow leaves and hike up the mountain a second time. I also wanted to show our family a little of “Old Japan”. Because the time of the leaves is the most popular time to visit Miyajima I thought that it would be impossible to find a place to stay, much less rooms at the Iwaso. The gods were kind. When I first emailed the Iwaso they had two rooms available, and I couldn’t find rooms anywhere else on the island. A week later (and this was late October) they emailed me again to tell me that they had had a cancellation and that there were now three rooms.

We stayed at the Iwaso Ryokan

We stayed in this hanare at Iwaso Ryokan in May

A room with a view . . . of unbelievable color

The view from our window in the morning sun.

I have this photo on my computer desktop and upon returning home to Ashiya I wrote a haiku about my memory of the moment.(Note: Our friend Paul Faust reintroduced me to the art of the haiku. He has been writing haiku for more than 20 years and has won many awards. He gave me a copy of his book of published haiku which inspired me to try to write one of these verbal “word pictures”.)

in the yellow and red leaves

We started at Daishoin Temple

The view was spectacular

Misen Hondo Main Hall at the top of the mountain

Prayers to Jizo (look on the left side of the temple porch in the photo above) About Jizo – http://www.zendust.org/jizo/

The top of Mt. Mizen

View from the top: the Seto Nakai

We took the ropeway down

Don loves this shrine, built in 1587 by Toyotomi Hideyoshi, because of the construction of its internal roof structure.

I love the paintings hung from the ceiling

Dan & Cheryl on the deck of Senjokaku with Mt. Misen in the background

After dinner the staff at the Iwaso told us that they had a surprise for us; when we followed the staff person outside, there was a taiko drummer performing just for us.

After the drumming, Don and I and Dan and Cheryl walked to the water’s edge at Itsukushima Shrine to see the Torii at night.

The ending of a perfect day

I think that it is very unusual to successfully repeat a special experience, but our stay on Miyajima with our family was even more wonderful than our first visit in May for my birthday. It was a magical experience.

You would think that this would be enough for a visit to Japan, but upon our return to Ashiya the adventure continued: we all were guests at Paul and Emiko’s home for a Nabe dinner, we cruised Starr in the Seto Nakai to Shodoshima, and before eveyone flew home made a short trip into Osaka to finish our Christmas shopping. We had a very busy 10 days.

Our family returned home to Seattle on 22 November and Don and I few to Seattle the next day to spend Thanksgiving and Christmas at our “other home”.