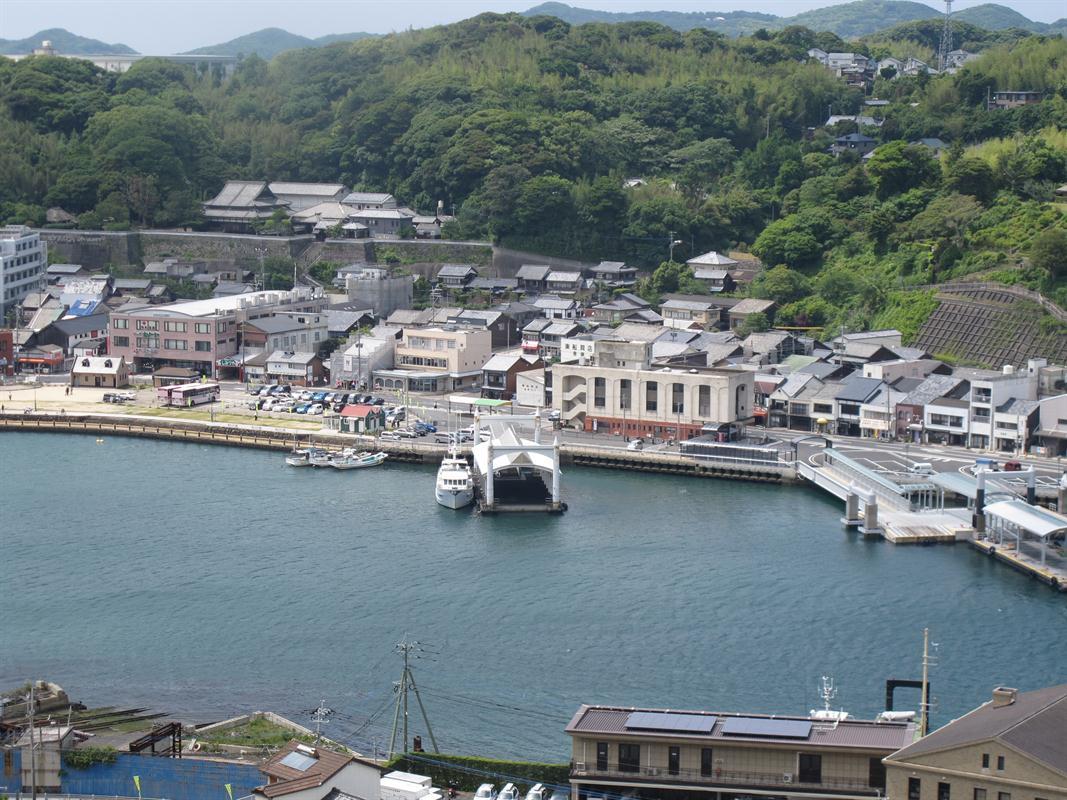 I had no idea that when Carol called me from Gagyu-gama Gallery in Nagisaki to tell me about the beautiful tokkuri (sake bottles) and sakazuki (sake cups) in the gallery, where her call would lead us. Carol knew that I had been looking for a special sake set, but had not yet found one that “spoke to me”. As a result of her call, I met her at the gallery and as soon as I walked in knew that the ceramics there were beautiful beyond anything that I had yet experienced in Japan. I bought my tokkuri and sakazuki and then went back to Starr and began to read about Kyushu ceramics. I learned about the three important Kyushu ceramics towns: Imari, Arita, and Karatsu, all in Saga-ken. Don humored me when I decided that I wanted to visit all three of these towns.

I sent Furuno-san an email telling him that we were very interested in Japanese history and Japanese ceramics and that we wanted to stop in Hirado, Imari, where we could visit Arita by train, and Yobuko which is now part of Karatsu City. I and asked for his help in securing us entry to these ports and a berth.

After leaving Nagasaki on Saturday, May 29 at 0600, we had a beautiful cruise to Hirado, a very small castle town just north of the bridge in Hirado Seto., a narrow passage between Hirado-shima and Kyushu with very strong current We were a little late and the current was building, but we powered into the harbor against a current of 5 knts (thank goodness for Starr’s twin rudders) and tied up to the ferry dock. R. Uchiyama san from the Japan Coast Guard was at the dock to help us tie up, and Nobuyuki Tanigawa from the Visitor Center appeared shortly after to give us information and maps. Both spoke excellent English. We started out by visiting the Matsura Historical Museum (the post Meiji restoration home of the Matsura family who ruled this area from the 11th to the 19th century), and we walked the town.

Starr in Harado with Matsura Historical Museum in background

The next day Tanigawa san acting as our guide in Hirado took us to the Memorial Service for William Adams (1564-1620), Miurin Anjin sama from James Clavell’s novel Shogun. William Adams died in Hirado and every year there is a memorial service to honor him, attended by the 41st lord Matsura and representatives of both the Dutch and the British embassy. I vaguely remembered that Anjin san was based on a real person, but had no idea as to how greatly he influenced events in Japan during his lifetime and how much he was honored by the Japanese. According to Wikapedia: “Soon after Adams’ arrival in Japan, he became a key advisor to the shogun Tokugawa Ieyasu and built for him Japan’s fist Western-style ships. Adams was later the key player in the establishment of trading factories by the Netherlands and England. He was also highly involved in Japan’s Red Seal Asian trade, chartering and captaining several ships to Southeast Asia. He died in Japan at age 55, and has been recognized as one of the most influential foreigners in Japan during this period.”

If you would like to learn more about William Adams go to: http://en.wikipedia.org/wiki/William_Adams_(sailor)

Our guide, Tanigawa san, was born in Hirado, is decended from a Samauri family and is very knowledable about Hirado’s history. In addition to Anjin sama’s memorial service, he took us to the Buddest Temple, to the Catholic Church of St. Francis Xavier (who visited the town three times during his life in Japan) and to Matsura Castle. Up to this point we had spent most of our time in large cities; Hirado is small, mainly two streets of old-style wooden houses, one on the waterfront and one a block behind the waterfront. There is a street with shops selling dried fish and seaweed, and a street of sweet shops with the castle towering over the harbor and town.

Hirado is what we have been looking for in Japan: a small fishing town packed with history: daimyo and samurai, “hidden” Christians, Dutch and British trading houses, a Meiji villa which is now a museum, and the visual pleasure of the castle dominating the scene.

Sunday night we had one of the best dinners we have had in Japan in a small restaurant with counters built around pools for live fish; the young sushi chef, wearing rubber boots, netted the fish from the pools that he served to us as sashimi. The owner is an artist and the interior was incredibly funky and original.

Menu and our Sushi Chef

Monday morning we left Hirado and traveled a quick 18nm to Imari. Furuno san still hadn’t been able to get clearance from the Imari Port for us to stay, so we entered the only commercial port area that looked possible and tied up with a bunch of tugboats against a concrete wall. Shortly after we heard from Furuno san that the Port officials wanted us to move to another location outside the enclosed harbor we were in, and tie up to the quay in the main channel with the big freighters. The crew on the tugboats had told us that the space that we were in was a “free space” and that we were welcome to stay. We cried “safety” and Furuno san talked the Port into letting us stay. It’s a great location, quiet and safe and very close to the local train to Imari and beyond.

Starr with the tugboats

Tuesday morning we took a 20-minute train ride to Imari, which was a window into the current state of the Japanese economy. We searched for a place to eat lunch, but nothing was open; Imari was a town of empty storefronts and closed restaurants. It had fabulous porcelain works of art placed on bridge posts and on corners in the downtown, but no one was on the streets but us. It was a ghost town.

We found the one small noodle shop that was open for lunch and slurped down a bowl and then went to the Akira Kurosawa Memorial Museum Satellite Studio (we were the only people there). It was great, memorabilia, paintings and film clips of the great Japanese director. On the way back to the train station we quickly checked out the two Imari porcelain shops that were on the main street and headed back to Starr.

Note: if you are interested in Japanese feelings about the Atom Bomb in Nagasaki, we just recently watched Rhapsody in August, written and directed by Akira Kurosawa, which explores the thoughts and feelings of the older generation that lived at the time of the bomb, and a younger generation becoming aware of how it effected their grandmother.

Wednesday we took the train the to Arita, near Sasebo. I thought that I remembered that the Gagyu-gama kiln was near Sasebo, so upon arriving at the Arita Train Station I asked the young laday at Visitor Information if it was in Arita. The answer was “no”, so we asked if there was any of their work in Arita and she called a gallery that she thought might carry their work. “No” again, but she would call the Gagu-gamma Company and ask where we could see their product. She made a phone call and then asked us if we would like to visit the company? Yes! We would like that very much. She went outside the train station with us, and told the taxi where we wanted to go. Ten minutes later, we are at the Gagyu-gamma Company; we walked in the front door into the most incredible Gallery of fine porcelain, far beyond what we could have imagined. A young woman comes running down the stairs and turns on all of the lights, asks us to be seated and brings us tea. She tells us that she doesn’t speak English, but someone will be with us right away. Hiroyasu Tagawa, the 77-year-old gentleman from the Nagasaki Gallery comes into the room and greets us; he just “happened” to be there for a visit. He, it turns out is the Chairman of Gagyu gama. He gives us a tour of the work areas; we meet the 82-year-old master, Yokoishi Gagyu (Soyo) XIII, and see some of the process of producing the beautiful product being done by other young artists. Tagawa san then takes us to lunch at a wonderful “popular” ramen shop before we take a taxi back to Arita where we visit the Kyushu Ceramics Museum before we take the train back to our very rural suburb of Imari. Our heads are full of images of beautiful Kyushu porcelains dating back to 1600.

If you are interested in learning more about Gagyu-gama go to: http://www.gagyu.co.jp/i/