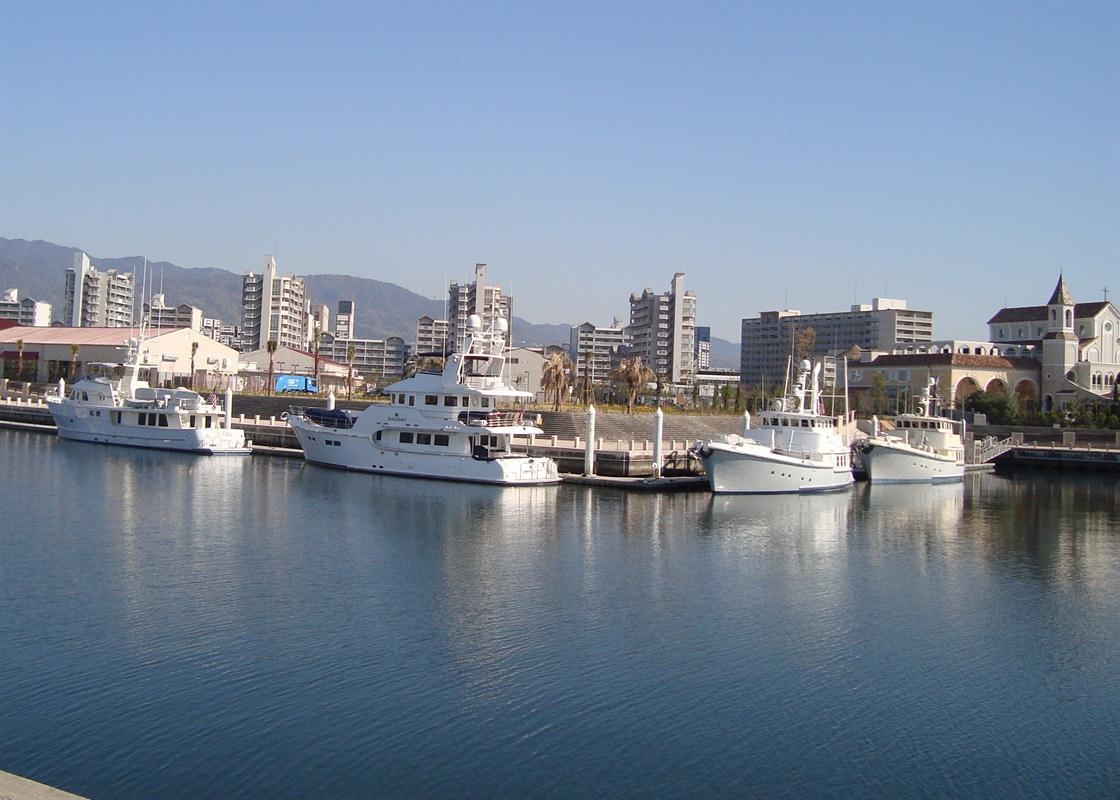 We left Ashiya yesterday morning at 0800 and the GSSR group +1(Starr) cruised to the island of Shodo-shima, the beginning of the Seto Nakai, the Inland Sea of Japan. After so many miles of cruising on our own it felt a little strange (but good strange) to be traveling in the company of other yachts, especially other powerboats.

Don and I are very independent in our cruising; we like to travel without an itinerary. Usually we know when we will start a trip and when we will return; everything in between is loosely structured. If we like a place we stay as long as we want. If we hear about what sounds like an interesting place to go, we go. The itinerary for our voyage from Hawaii to Japan was very simple: leave Hawaii sometime in late January – Arrive Japan in mid April. The only structure in between was the date that Dave and Mary Utley were scheduled to fly into Honolulu and home from Majuro, and the dates Tad and Joyce Lhamon were scheduled to fly into Guam and home from Japan. We cherish this flexibility.

We also cherish our privacy. While we enjoy having friends with us on Starr, we love cruising with just the two of us on board. We traveled very loosely with Shibui from Seattle to Pohnpei; Brian and Mary Alice are also very independent travelers. We left Seattle at the same time and met again in Sausalito, CA. We left San Francisco at the same time and met again in Hawaii (but they cruised in other islands and even when we were both on Oahu they were on the opposite side of the island from us most of the time). They left Hawaii before us and cruised to Palmyra; we met again in Majuro in the Marshall Islands. They headed North to Kwajalein; we headed South to Mili and Jaliut. We met again in Kosrae in Micronesia; we left before them and met several weeks later in Pohnpei. In Pohnpei we parted ways; they have traveled to Lamatrek and Yap and we are here in Japan. That is what I call loosely “crusing together”.

So now we are a part of an Official Group: the GSSR (Great Siberian Sushi Run) at least for a while. We are really happy that they let us into their group because (1) We didn’t make the trip to Japan via the Aleutians with them and (2) Starr isn’t a Nordhavn. They jokingly called themselves “the Wrong Way Group” and now they call Don and I “the Long Way Group”. They are headed down the southern Japanese Ryuku Islands to Okinawa, and to Hong Kong where they will spend the winter. We will cruise with them through the Seto Nakai to Nagasaki and then we will turn around and cruise up the West Coast of Japan, back into the Seto Nakai and return to Ashiya, our Homeport for our “Year in Japan”.

We arrived in our first anchorage of Uchinomi-ko, on the island of Shodo shima at 1600. It was quite windy so we all settled in on our boats and planned to go ashore and explore the sites in the morning, but around 1700 we noticed that a rubber inflatable boat had pulled up alongside San Souci. It was the Japanese Coast Guard (JCG) telling us that Uchinomi is a Closed Port and that we would have to leave. Grey Pearl had a Japanese guest on board who tried to tell them that all four boats had been imported into the Japanese system and showed them the papers that authorized us to cruise freely throughout Japanese waters. They were intractable; Uchinomi is a Closed Port and we must leave. We called Furuno san, our ship’s agent in Tokoyo and brought him into the discussion; nothing changed. Our Japanese guest who owns and operates a shipping and stevedoring business in Yokohama called some people that he knew; the answer was still “No”. Finallly after about an hour of talking, the JCG allowed us to stay the night, but told us that we must leave in the morning and we would not be allowed to go ashore. Furuno san is negotiating with the JCG and Shikoku Transport Bureau about our visiting Closed Ports. The current problem is that this is “Golden Week” holiday throughout Japan and the Transport Bureau will be closed from May 1-5 due to the holidays. He issued us a list of Open Ports that are approved for us to visit. Apparently we can visit Closed Ports if we arrange in advance and obtain permission.

Our Japan Coast Guard Escort out of Uchinomi Ko