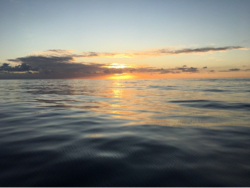 Yesterday morning we decided it was time to bust out the fishing gear again and snag something for dinner. Within an hour we had landed two mahi mahi. The first went into the freezer. We threw the second one back and put away the rod and reel. Not bad. We’ve fished for just over an hour total and landed three mahi mahi.

The skipper declared that we’ve caught enough mahi. It was time to catch some ahi. How do we do that? I texted my daughter Kendra’s boyfriend Fred, a legendary offshore fisherman, for some advice. He responded, “7-9 inch, green lure, bullet shaped… and Kendra is gonna be jealous that I got a text and she didn’t! Haha.”

It was glassy all day yesterday, and once again there was relatively little rubbish in the water, just a few floats and the occasional smaller stuff just below the surface. We didn’t see any ships. I did see a contrail above us parallel to our course. Must have been a HNL-SEA flight.

A couple of us saw a green flash at sunset. The air was exceptionally clear with clouds disappearing over the horizon. That’s the second time I’ve seen it this summer!

We are in just about the same location where I’ve had to make some hard decisions during multiple Transpac races to Hawaii. After six days on starboard tack, the decision on when to make that final jybe to port tack is critical and often determines the winner of the race. Jybe too soon, and you’ll have to jybe back to starboard, the lifted tack, at the end of the race. That means more miles sailed and a slower race. Same thing if you wait too long to jybe – wasted miles. It is difficult to pick a lay line from 400+ miles out but it sure feels good when you get it right.