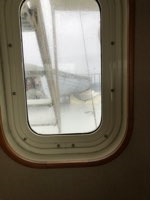 Posted at 18:04h in Aleutians, Blog, Hawaii by Don and Sharry 5 Comments
This is Noodle’s daily blog on 5 June

“What should be the title of today’s blog?”, I asked Sharry.

“Gray”, she replied. It’s an accurate description of what it looks like out here. The ocean is gray except for the breaking white caps. The 100% overcast sky is gray.

The wind has increased and clocked around so that it is now coming out of the west at about twenty five knots. There has been much debate in the wheelhouse about the actual wind strength. Our anemometer says it is blowing over thirty knots, but it seems lighter when looking at the sea surface. We’ve tracked some of the squalls rolling past on the radar just for fun, and some of them are moving at forty knots. As sailors, we can get a pretty good sense of wind strength by the feel of it on our skins, but there is not a chance in hell that we are sticking our heads outside the wheel house into the 41 degree wind and spray.

The seas are big and coming from a couple of directions so they are confused. Starr is laboring as she works her way through them. You may have noticed on the tracker that we have slowed down to about seven and a half knots. Our RPMs are still up, but the seas are impeding our progress.

Salt spray on the wheel house windows is constant and heavy, Thank goodness Starr is completely water tight in these conditions. We did find one small leak back in the lazarette that is dripping. Looks like it is coming through the port side windlass or one of the plugs back there.

Whoa! As I was writing this, a huge wave broke against Starr’s port side. It tore open the port side gate through the vessel’s four foot high bulwarks breaking the gate latch, swept across the aft deck, and turned our picnic table, which was lashed against the transom bulwarks, into kindling. About twenty gallons of water poured down the ventilators into the engine room. It even broke on our davit deck twelve feet above the water line, tearing our rowing dinghy from its chocks.

Don was in the wheel house when the wave hit. He throttled back and turned us into the swells so we could deal with the loose gate, broken table, loose dinghy, and water in the engine room. A half hour later we were all cleaned up, but it is still rough out here and we don’t want a repeat performance. We are continuing to head into the seas at about six knots.

The forecast says that the wind and waves should moderate a bit tomorrow. That will allow us to get back on course and back up to speed. If we can get going again by late tonight or early tomorrow we will make it into Dutch Harbor by late Friday. We don’t want to mess around out here any longer than that because another deep low is approaching from the west.