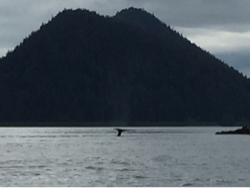 Posted at 14:37h in Alaska, Blog by Don and Sharry 1 Comment
The seas flattened out and the skies cleared as we entered the fjords of Prince William Sound. Starr wove her way around headlands and through the islands to our anchorage for the evening at Fox Farm Bay.

This is the southern most protected anchorage in the sound and is the first and last stop for many boats arriving and departing this cruising paradise. There was another boat in the anchorage when we arrived. They departed shortly after we got the hook set and three more boats arrived later in the day.

After launching the dinghy Don and I went out into the passage outside the anchorage to try to snag a salmon. We had no luck there, but did encounter a young humpback whale that was skimming the shore and bubble feeding. He came within twenty feet of the dinghy, but of course the battery on my iPhone had died by the time he got close so I didn’t get any good photos.

Don went over to socialize with the other boats later in the day and got some good tips on where to fish, shrimp, and crab here in the sound. This morning a couple off of a Nordhaven 50 that Don had been talking to came over for coffee and brought some bear meat and shrimp to share. They told us the bear is great for stew and that the shrimp was caught yesterday.

This is a really nice spot. Otters float peacefully on their backs, eagles fish, and humpbacks spout within sight of Starr as we swing to our anchor. I could spend a month here, but there is a lot we have left to see. We plan to go for a quick hike ashore and then depart for the next gem a little deeper in the sound.