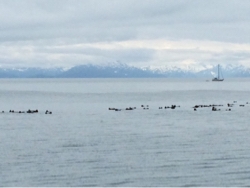 Posted at 15:51h in Alaska, Blog by Don and Sharry 1 Comment
After some terrific glacier viewing we picked our way back out through the ice cubes to clear water. The spot where the ice ended was right over a submerged moraine, the ancient limit of glacial ice where rubble carried by the ice was deposited creating a shallow area. The moraine was very popular with the Otter. There were multiple rafts of as many as thirty of them floating around. It looked like some kind of a community meeting or perhaps a love-in.

Wells Passage is a bottleneck in Prince William Sound that separates the northwestern fjords from the rest of the sound. As Starr came around Pt. Esther and into Wells Passage we ran smack dab into the middle of a fleet of hundreds of fishing boats drift net fishing, our second flash mob of the day. With that many boats out we suspect it was opening day of the season and an especially popular fishing spot. It was nerve wracking zigging and zagging as we picked our way through the long and hard to spot nets. The fishing looked good with lots of big salmon coming up as the boys retrieved their nets.

Later on we picked up the Polar Endeavour, a tanker headed from Valdez to Barbers Point, Oahu, on the AIS. Now we know where our gasoline in Hawaii comes from.

We ducked into a couple of coves along the way where Don and Sharry had a look at two oil spill response barges that they are considering investing in. These 400 foot long by 100 foot wide barges are staged in a couple of places in Prince William Sound to provide quick response if there is another accident similar to the 1989 Exxon Valdez mishap.

We stopped for the night in Garden Cove, the closest sheltered anchorage to the eastern entrance to the sound. We wanted to be ready to begin our dash across the Gulf of Alaska toward Sitka first thing this morning. We found a small motor sailer, Shearwater, anchored in the cove when we arrived. Don remembered meeting the owners a few years ago while cruising in the Pacific Northwest. They had just arrived from Sitka and are looking forward to spending a couple of months in the sound.

The mighty Starr has lucked out again with the weather, at least so far. This morning we are thirty miles down the track toward SE Alaska in flat seas and zero wind. We are running along next to the shipping lane, and there is a lot of traffic out here. We’ve passed a number of tugs pulling barges, a cruise ship and a couple of fishing boats. The visibility is exceptional. We can see a glacier abeam thirty miles to the north and Kayak Island came into view when it was fifty miles ahead of us. The forecast looks good all the way to Sitka.

We timed our departure this morning so we will arrive off of Lituya Bay at slack tide tomorrow evening. This was the site of the largest tsunami in modern times. The 1958 tsunami washed out trees on the hillsides around the bay to an elevation of 1,710 feet above sea level. A couple on their fishing boat, which was moored in the bay at the time, miraculously survived the onslaught. We can’t pass by the site of this historic event without sticking our nose in to have a look.