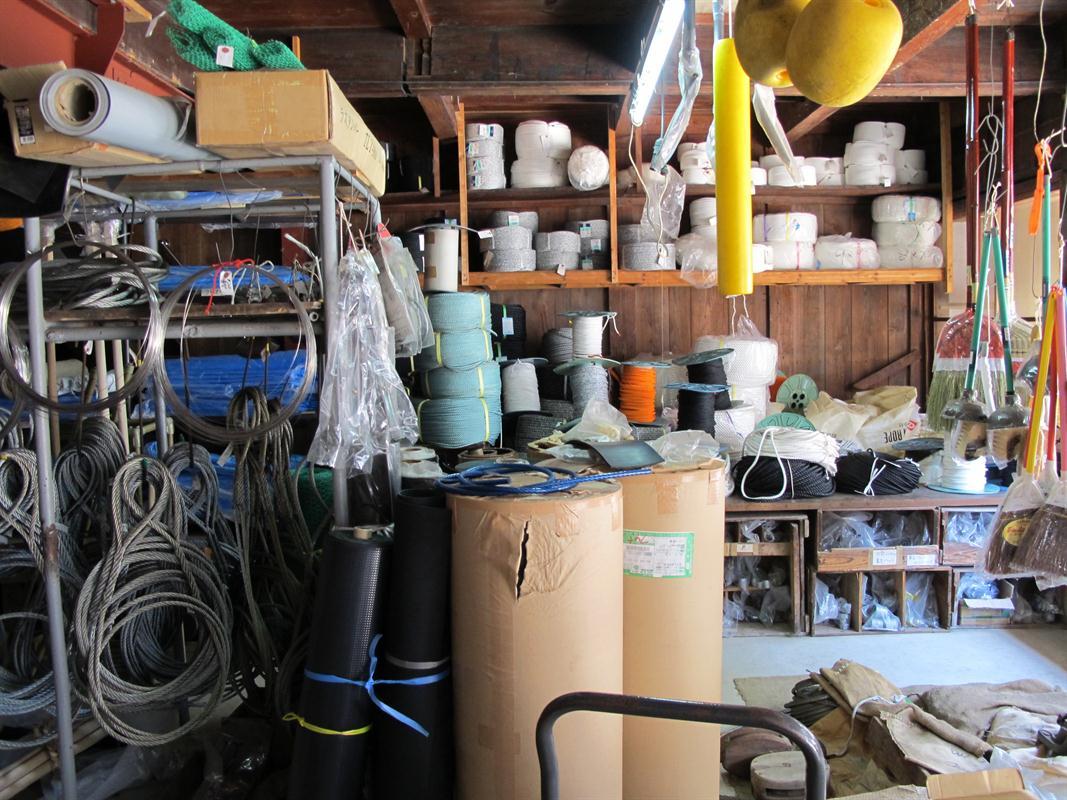 Sharry and I were wandering down the main business street in Yobuko, just looking at the various small businesses that were interspersed with homes. Often the business was on the front and the living unit was in back or adjoining on the side. We came across one shop that was full of ships rigging and parts such as stainless steel and galvanized shackles, swivels, chain, block and tackle. Rows of treasure for us boat nuts. In one section there were galvanized cable chokers with the eyes beautifully hand spliced! I went up to the main desk and asked who did the cable splicing. I needed to replace the eye splice that joins our 400 foot long, 5/8inch anchor cable to our one shot (90ft) of anchor chain and I was on the lookout for a good splicer. The man at the desk didn’t understand my English and I couldn’t make myself understood with my poor excuse of “Nihongo ga wakarimasen” (I DON”T UNDERSTAND JAPANESE).

Another man steps out of a parts aisle and said “I don’t speak English very well but maybe I can help you”? We proceed to question who had made the cable splices, but concluded that they were done by machine in another town too distant for us to travel to. After I drew some pictures explaining what I needed, another man who was working at the desk, made a few calls and then my new friend, who introduced himself to us as Junichiro Taniguchi, said to me “let’s go get in my truck because a splicer will meet us at your boat in ten minutes”.

Taniguchi san and Keishu Ayabee (the man at the desk, who works for Taniguchi san’s brother at the ship supply store) go to meet the splicer at the dock and we proceed to re-splice the eye.

We had a lot of help, as the fishing port boss, and other interested people watched and offered help on the project.

When we were finished with the splicing, Tanibuchi san wouldn’t let me pay them. Taniguchi’s response was to say that he was a sea person and sea people help each other.

Instead of letting us pay him for the splicing work, Taniguchi san asked us if we would like to meet him the next day and he would give us a tour of his town and some of the adjacent towns as well. We spend the next day touring castle grounds and shrines and start to learn a little about him. In typical Japanese understatement he told us that he taught in a fisheries high school on the island of Hokkaido, 1000 miles to the north. As we spent more time with Taniguchi san we learned that he was not only a teacher, but also a principal and when he retired was the superintendent of the fisheries school, which has a student body of 500 kids up to age 20. He also had done numerous voyages on the school’s 300 ft fisheries research ship to places like Hawaii and the Bearing Sea with his students.

We spent the next 5 days off and on with Taniguchi san. He was raised in Yobuko and was back in his hometown helping with his elderly parents. Dad, at 89, was to have a serious operation the next week. We met his family and friends and felt part of the village by the time we left. We told Taniguchi san that we were making a 4am departure the next day. Guess what? When we leave on June 7 at 0400 in the dark, I start up the main and turn on the running lights and reflected in the red port running light is Taniguchi san there to throw off the lines. What a guy!