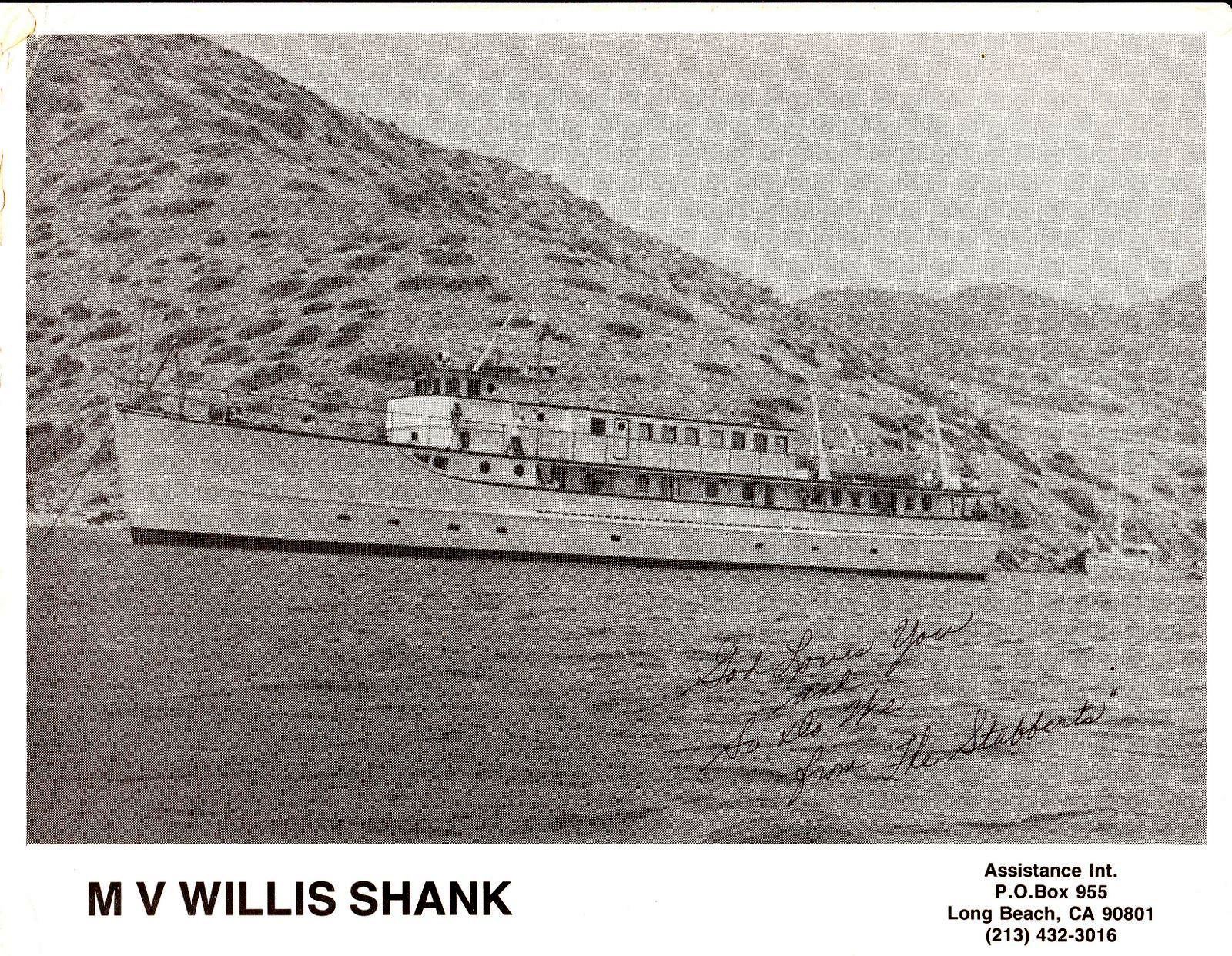 Posted at 18:33h in About Early Years, Blog by Don and Sharry 2 Comments
Don’s sister responded to our Blog: “Rescue on the High Seas”:

As many of you already know, Don was raised from age 3-19, on a 136’ WWII minesweeper converted to a Missionary Hospital ship. This is “Donna’s Story”, her memory of a experience from her teen-age years on the Willis Shank.

Willis Shank
Donna in Alaska this summer on Starr
Dear Don and Sharry,

I read the blog yesterday, and broke down in tears. In fact even today I have butterflies in my stomach just thinking about your rescue story. What prompted such emotions? The little boy’s voice calling out that they were sinking. Here I am in my Senior Years remembering “My Story” years ago, and responding emotionally through the eyes of that little boy.

In my teen-age years, I was on the Willis Shank during a violent storm. We were crossing a body of water in the winter on our way to Craig Alaska. The storm came up and the waves were so big that it was impossible to turn around. We were all in our bunks holding on so that we wouldn’t get thrown out of our bunks onto the deck. The waves were slamming us and so high that you couldn’t see the top at times. Dad was at the wheel, and my cousin Bud Hartung, a former Navy seaman, was standing watch with him. Finally Dad had to leave for a moment and asked Bud if he could take the wheel for just a second. Every wave had to be taken at the right angle and at the right time, if we were going to make it through the storm. Bud looked down for a second to clip a fingernail took the wave wrong and the boat ended up in the trough. The boat shook, quivered, and I along with the rest thought this was the end of my life and the rest of our family. I didn’t know if the boat would make it. We heard everything around us falling, the sound of breaking glass, and the organ that was bolted to the deck was thrown across the room. At that point we were all too scared to care about the damage. The chaos and noise of everything falling

For reasons unexplainable, the boat did right itself, and Dad was able to make it back to the pilot house, and continue piloting the ship, riding out the vicious winter storm. There were smaller vessels that did not make it through the storm, including a friend and Minister at the Presbyterian Church in Craig Alaska.

I am so in awe of your skills Don, and your superb ability to handle your Ship. The support you had from the rest of your crew, as well, in rescuing the vessel, and putting that dear little boy at ease. I can see the smile on Dad’s face as he said “Well done Son, I am so proud of you”.

Okay, enough, for some reasons writing this, is still bringing tears to my eyes. What a wimp I am.

“I think that I was about 7 years old and I clearly remember that we found the 65’ fish packer washed up on the rocks. The skipper and his crew were found in their life jackets tangled up in the kelp bed. It’s funny though, I don’t remember the storm even though I was on board. I BLOCKED IT OUT COMPLETELY, but I can still see the image of the fish packer wedged up high on the rocks.”