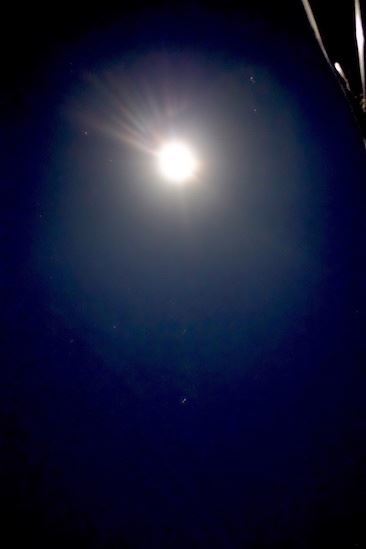 My Last Night Watch of this Passage

Supermoon
I’m sitting on the step on the port side of the wheelhouse, both wheelhouse doors are open and the warm night air at 78 degrees is cooler than the temperature of the sea at 82.5 degrees. I am barefoot, dressed in shorts and a tank top, and the warm night air wraps my body in a soft caress. The “super” moon is a slightly squashed circle of light, not quite full but probably will be by tomorrow night. It looks as if some giant hands have squeezed the moon on each side and slightly flattened it. It is so bright that it lights the Pacific Ocean like a giant spot light shinning on the night dark sea. We are now very close to Hawaii, 114 nm, and this is my last night watch of this 18-day passage from Seattle to our Hawaii home at Waikiki Yacht Club.

I love the night passages; on previous night passages I have listened to music or to audio books, but this passage I decided that I wanted to spend my nights in silence; well, not quite silence, there is always the faint background “whooooo-whooooo” sound of the engine, and the ever-present “slouch-slouch’” sound of the sea, (which sometimes is a not-so-friendly ”BASH!-BASH!” sound of the sea beating against the hull). Tonight is the perfect night passage and it is a quiet, constant “slouch”. These sounds are very comforting to me. The moon creates a “half-daylight” and the stars are singular and bright in their appointed places in the sky. This passage I have been accompanied by Orion off the port-aft quarter and Cassiopeia off the starboard, familiar and comforting companions for a 3000nm journey.

Sitting in the pilot house I must always be alert to our two radars on “night mode” and our navigation screen, all set to search for the tiny blob that might identify a vessel (or might be a squall) and for the AIS identification of any vessels which might be passing us in this tiny little part of this hugely vast Pacific Ocean. Watching the screens, the sea, the moon and stars in silence, I am always amazed at how quickly the time passes. These night watches are my time to be alone with myself, I suppose it is a little like meditation, and it is my favorite part of an ocean passage on Starr.

This was our sixth passage from Seattle to Honolulu and back to Seattle, (not counting our passage from Hawaii to Japan and back to Hawaii, 2009-2012, or our South Pacific runs). Starr has accrued 14,300nm just commuting to and from Honolulu; this trip has taken us 18 days.

Since we purchased Starr in 2000 we have traveled 100,000nm, which includes the crossings of both the Pacific and the Atlantic Oceans.

Supermoon setting in Waikiki: the view from Starr in our slip at Waikiki Yacht Club
Don’s Thoughts:

The North Pacific winter storms had an early start in the Pacific NW. Our first 5 days were bumpy, with a 36-hour layover in Coos Bay Oregon to avoid the 30-40kts winds outside the harbor. By the time we passed Point Arena, 80nm north of San Francisco, we were clear to start heading in a more westerly direction on our southern course, and the running was more comfortable with Starr staying on the southern edge of the ongoing depressions. The combination of using the professional version of PredictWind, with Brownie crunching the numbers, combined with the first class weather routing from our shore-side experts, made for an interesting trip. At times it felt like we were threading a needle avoiding bad weather. We were making course alterations on a daily basis as we saw the weather shifting.

We are fortunate to be members of the CCA (The Cruising Club of America); our Pacific Northwest Station is made up of remarkable people who are ocean-experienced sailors. Most of our passage- making crew have been friends who are CCA members. We had a great time with Douglas (Duke) Adkins and Mike (Brownie) Brown. Both of these guys are excellent writers and published authors. Douglas authored the Collector’s Book, Dorade, about the 1930 Olin Stephens Yawl that most recently won the 2013 Transpac. Brownie co-authored Thog’s Guide to Quantum Economics: “50,000 years of accounting basics for the future”, a very funny and thoughtful book. (Both of these books are available from the authors or on Amazon).

It has been Sharry’s and my pleasure to have Doug & Brownie on Starr for this passage.

Douglas (Duke), Mike (Brownie), Don and Sharry on arrival at Waikiki Yacht Club
We arrived in Honolulu on November13, had a few days to recuperate from the passage, and to wash and clean up the boat; we then took Starr around the South end of Oahu to Kaneohe Bay. On Nov 20, with 30 of Mike’s family we spread Lee’s ashes in Kaneohe Bay. We were privileged to be a part of Lee’s last Ocean Passage.

WE WILL MISS HER!