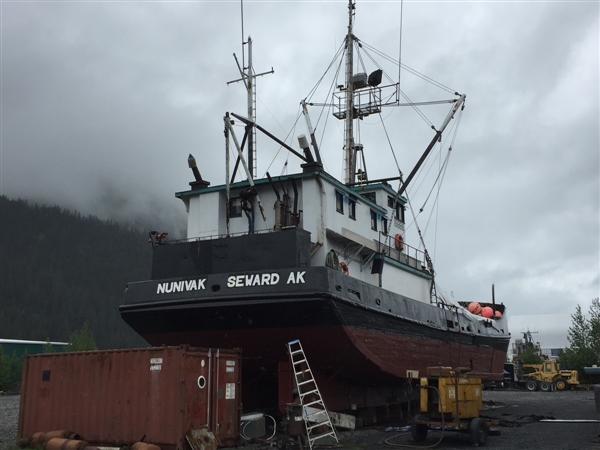 Posted at 20:10h in Alaska, Blog by Don and Sharry 3 Comments
Shelia took us on a driving tour of Seward and then up to her new house that is currently under construction on Bear lake a few miles outside of town.  She and Al are about 2/3 done, and it will be a very comfortable home when it is finished.  She loaned us her truck so we could do some provisioning, but on the way back to town Don took a detour to have a look at the local shipyard.

“Oh my God!”, Don exclaimed as we pulled into the yard.  He’d seen a ghost, an 88 foot power scow that he heard had been scrapped many years ago, sitting on the hard with a new paint job getting ready to be launched.  It was the “Nunivak”, a boat once owned by his father that Don started skippering in Seattle when he was fifteen years old.  The twin screwed wooden power scow was one of many built during WW2 to tow barges and haul freight.  Don used to haul sand and gravel in her, among other things, and he was running her when he first met seventeen year old Sharry.

A crew member on Nunivak invited us aboard to have a look.  Don toured me around, reminisced, and described how things had been changed; gear shifts, stoves, engines, cranes, etc.  She’s an old girl now and is quite the contrast to the immaculate Starr.

Lori’s bus from Anchorage stopped for an hour midway in the drive at a wildlife park and she got to see porcupine, deer, elk, brown and black bear, and moose up close.  She arrived in Seward at 430PM and the Starr crew went out to dinner at “Ray’s”, a nice restaurant at the head of our pier.

A strong front associated with the low pressure area we’ve been avoiding passed through at 3AM this morning bringing forty knot winds and lots of rain.  The breeze is starting to taper off now, but not enough to allow safe passage to Prince William Sound today.  The forecast calls for fifteen knots tomorrow so we are planning to depart first thing in the morning.